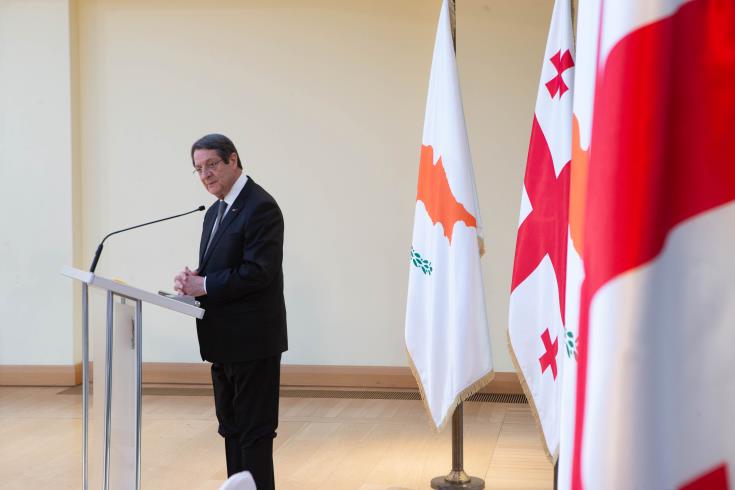 Cyprus President, Nicos Anastasiades, highlighted on Thursday the prospects to advance the economic cooperation between Cyprus and Georgia, noting at the same time that the two countries enjoy a long-standing exceptional relationship, founded on concrete and deeply-entrenched historical, political, cultural and religious ties.

Addressing a Georgia-Cyprus Business Forum held in Tbilisi on the occasion of Anastasiades` official visit to Georgia, the President said that the Forum, which was also addressed by Georgian President, Salome Zourabichvili, provides a unique opportunity for all participants to hold productive discussions and identify the business opportunities that Cyprus and Georgia have to offer, as well as exchange ideas and means on further strengthening the economic, trade and investment partnership between our two countries.

The President said that the relationship between Cyprus and Georgia is greatly valued by the Government and the people of Cyprus and is one that we actively aim to upgrade even further.

“In this respect, I consider my official visit to Georgia, a historic visit I might say since it constitutes the first official visit by a Cypriot President, as an important milestone for reaffirming our reciprocal political engagement to the same fundamental causes,” he noted.

Anastasiades said that the causes are  “to qualitatively enhance our bilateral institutional framework of co-operation, as evident by the signing of a number of Agreements and Memoranda of Understanding in the fields of Agriculture, Health and Classified Information” and “to strengthen our economic relations, intensify trade and commercial flows, increase tourist exchanges and enhance investment ventures between our countries.”

The President note that even though an Agreement on the Avoidance of Double Taxation is in force, a Cyprus-Georgia Business Association has been established, and there is a vibrant Georgian community present in Cyprus “our economic relations have fallen behind our political and friendly people-to-people relations.”

“To this end, today’s business forum, the first to ever take place between Cyprus and Georgia, provides an important opportunity to significantly advance our economic cooperation in terms of revealing new possibilities and new markets for our business people,” he added.

He went on to say that in this endeavor “the historical links between the Georgian and Cypriot peoples, our political rapprochement, either through my visit or the recent visit of the President of the House of Representatives, which also constituted the first one at such a level to ever take place, and the newly established Cyprus – Georgia Business Club serve as an ideal foundation for broadening and promoting trade and economic activities between our entrepreneurs.”

The President also spoke about Cyprus’ comparative advantages which have established the country as a major center for International Businesses and have led  to a number of new and substantial investments in the fields of banking, energy, shipping, telecommunications, real estate and tourism; with new sea ports, marinas and the largest integrated casino resort in Europe under construction.

Moreover he noted that following successive upgrades by international rating agencies, Cyprus’ economy is now rated to the investment grade, after being in the “junk” category seven years ago.

This demonstrates the positive economic outlook of Cyprus, enhances the trust of existing investors and at the same time sends a strong message to new investors to explore the significant potential of our country, the President said, stressing that “our plan is to remain focused on maintaining and broadening the conditions under which surpluses and high growth rates can be generated, to continue promoting structural reforms and improving the country’s business environment.”

Anastasiades also stressed that “the possibilities for engagement between our business communities are also positively reinforced due to the progressive advancement of the EU – Georgian relations, which we fully support.”

He concluded by saying that his government stands ready to offer any assistance deemed necessary in order to facilitate business plans and investment initiatives that would enhance competitiveness, development and sustainable growth in Cyprus and Georgia.