President Anastasiades: ready to put up a fight to implement reforms 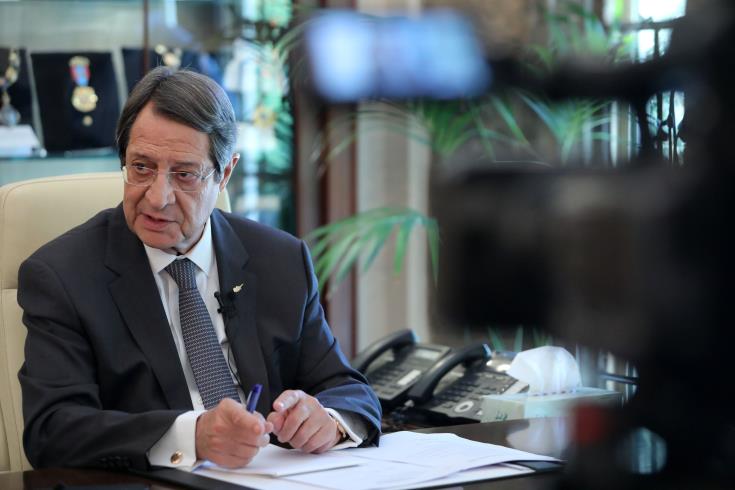 In an interview with the first issue of Forbes Cyprus, President of the Republic Nicos Anastasiades answers questions regarding burning issues plaguing Cyprus’ economy and troubling ordinary people and says he is ready to clash with all those seeking to obstruct the government’s reform drive.

Even though the economy of Cyprus is recovering, a number of issues need to be addressed, such as low salaries, high rents, the low rate of savings, low fertility rates etc. How does the government plan to deal with these problems?

No-one has claimed that our fellow citizens do not have a number of concerns or that there are no problems and challenges that must be tackled. Some of the issues that you have cited are among the problems facing most European states. These problems have become more acute because of the crisis. Today, we are in a much better position to deal with the challenges because we have an economy that is in recovery. We must continue our efforts, to entrench growth, promote changes and reforms so as to improve the situation and the welfare of all. This is the objective of all our actions and of all the government’s policies. That is why I have invited all the political parties to work together with me, to forge consensus in pursuit of this aim, to the benefit of our fellow citizens.

More than five years after the 2013 banking crisis, we are still trying to deal with Non-Performing Loans. Do you think that the government made mistakes on this issue, and if so which?

Regrettably, the mistakes were made in the past, before 2013 and not after. Have we forgotten the ease with which loans were given in the past? The reckless over-borrowing, that led households’ and companies’ loans to rise from €21b to €72b in ten years? When these were analysed and categorised with the correct criteria for the first time, it turned out that €28.5b of these loans were non-performing. Today, after concerted efforts, NPLs in the banking system are down to €11b. Many have been paid off, in one way or another, while many have been transferred outside the banking system, thereby facilitating their management. This progress is particularly important, taking into consideration the size of our economy. It is noteworthy the loans given after 2013 are almost all performing. Therefore, things have changed to the better, although the effort must continue.

How was it that one month before the presidential elections, the Co-op was presented as meeting its targets and only a month after, it collapsed like a house of cards? Was it because the government, as a shareholder, underestimated the risks?

I do not agree with this description of the situation at the Co-op. You are implying that while everything was going fine, problems suddenly arose. Up till 2013, the Co-op operated in a very problematic way and had come to an impasse. It reached the point of having negative equity. An effort was made, there was progress. However, the change in the regulatory and supervisory framework and the continuous raising of the bar by EU regulators, made it essential for decisions to be taken which would safeguard future capital adequacy and the security of deposits.  And this is exactly what happened. In a way which safeguards the stability of our economy which has seen consecutive upgrades, precisely because of these decisions which have shielded our economy.

Are you worried that at any given moment, our citizenship-by-investment scheme may be interrupted or significantly curtailed? What will we do in such an eventuality? Do we have an alternative source of revenue?

Our economy does not depend on the Cyprus Investment Programme. This is also the case for the economies of other states in Europe and the world which have similar programmes. As in the case of other states, for Cyprus too, the programme is a tool to attract foreign investors and high net worth individuals. The Cypriot programme has helped and continues to help, but it is constantly being re-evaluated and constantly being improved, and within this context I can tell you that the procedures and the checks are becoming much stricter. Not because mistakes were made in the past, but because we are the first who want to have a true picture of every investor and to continue to confer our country’s citizenship only to serious, credible and clear-cut cases, those who choose to make Cyprus their base.

Which would you say are the most important economic reforms that must be undertaken in 2019?

We have drawn up an extensive list of reforms, all of which are important. Indicatively, I would refer to three that I consider of particular significance. Reform of the courts, so that we have a quicker and more effective judicial process; reform of local government so that it can be viable and efficient, to the benefit of the citizen; and the horizontal reform of the Public Service so as to modernise the hiring, evaluation and promotion of personnel. I also consider the programme we have drawn up for e-government and the digital reform of the state that entails projects of tens of millions of euro, to be particularly important, as well as actions to further encourage research and innovation and university education.

Is Nicos Anastasiades ready to do battle with petty and partisan objections and finally press ahead with reforms in  key sectors of the economy?

I am ready to put up a fight against all those who obstruct, but at the same time, I am ready to cooperate and seek consensus with those who do not choose to negate and reject everything, but have the will to support a reform effort for the future and prospects of our country.

You have been criticised that as president you have made some bad choices for key posts. What is your response? Will you change the criteria with which you make appointments for the rest of your term?

I respect criticism, whether it is about the choice of people or any other decision which a president of the Republic is called up to make practically on a daily basis. Responsibility, in all cases, rests with me. This does not mean that mistakes will not be made or that there is no room for improvement. But I believe that fellow citizens have a positive view of the overall picture and of the results of our efforts.