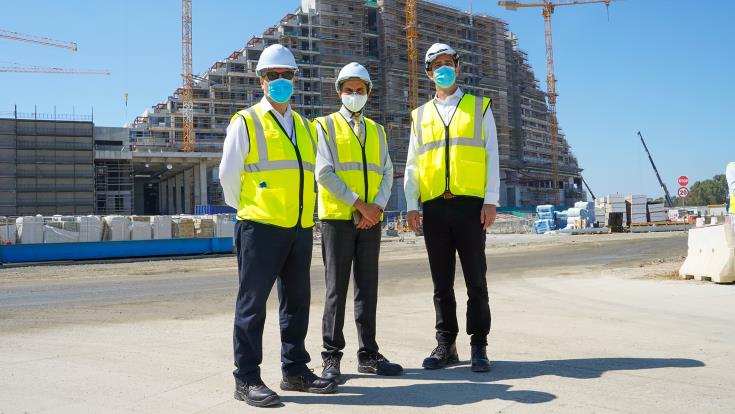 The integrated resort (IR) casino “City of Dreams” once completed will mark mark a turning point for Cyprus’ tourism industry, as it will create a destination for all seasons and enrich Cyprus’ tourism product, Deputy Minister for Tourism Savvas Perdios said after touring the casino’s construction site in Limassol.

According to a press release issued by Melco Cyprus, the Deputy Minister had the opportunity to see the IR’s progress and be further informed by members of the Company’s Management on the latest developments.

“Construction works are rapidly moving ahead and the project is impressive, offering compelling views of the area,” Perdios said according to the press release, noting “once City of Dreams Mediterranean is completed, it will mark a turning point for Cyprus’ tourism industry, as it will create a destination for all seasons and enrich Cyprus’ tourism product while attracting 300,000 additional tourists annually.”

Perdios added that that tourism might have been one of the sectors hardest hit by the coronavirus pandemic but, it remains however the backbone of our country’s economy.

“To this end, we focus on rebuilding travellers’ confidence, enhancing Cyprus’ competitiveness and encouraging innovation. Melco is without a doubt a key partner in this effort. Our goals are aligned and we share the same vision and I am confident that the City of Dreams Mediterranean will create extraordinary benefits and real value for the country’s economy and society,” the Deputy Minister concluded.

Property General Manager of City of Dreams Mediterranean and Cyprus Casinos, Grant Johnson on his part said, “we are aware of our significant role in revitalising Cyprus’ tourism sector.”

“We are committed to establish a world-class development that will serve as a landmark for Cyprus and a genuine point of reference for luxury tourism in the region,” he said.

Set for launch in the summer of 2022, City of Dreams Mediterranean will mark a major milestone as it becomes Cyprus’ first IR and Europe’s largest, opening up new prospects to transform the country’s tourism industry, the company said.