Fin MIn: Draft legislation on blockchain technology before the end of 2019 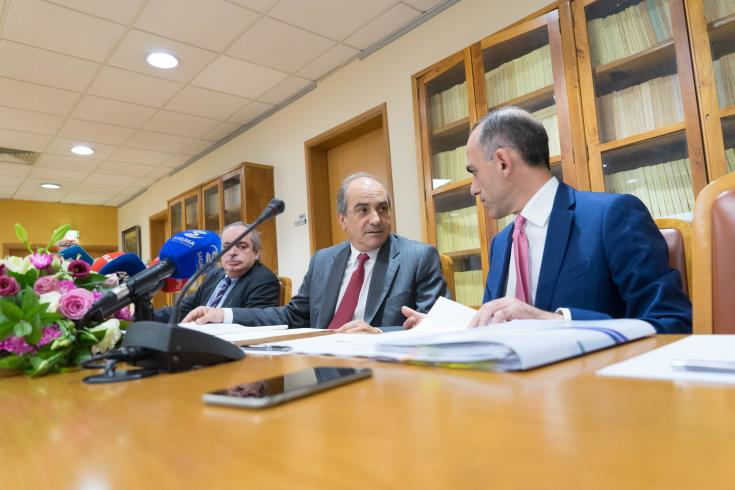 A draft bill to regulate blockchain technology in Cyprus is expected to be ready before the end of the year, as part of the National Strategy of Cyprus for blockchain that has been prepared, Minister of Finance Harris Georgiades said on Thursday.

The National Strategy was presented by the President of the House of Representatives Demetris Syllouris and the Minister, at a press conference during which they both stressed the advantages of blockchain technology.

“Full implementation of this technology across the public and private sector is expected to radically change the structures of modern societies, the way they are organized and their operation,” said Syllouris.

He noted that the National Strategy “will contribute to our country`s effort for digital transformation, providing the necessary framework and a road map to explore the applications of distributed ledger technology and blockchain technology in various fields, to optimise procedures, and to address any potential risks and threats”.

Finance Minister Harris Georgiades noted that Cyprus is one of the first countries to develop a comprehensive strategy to regulate and exploit blockchain technology, which he described as “a new technological revolution similar to that of the Internet.”

“As a country that has faced the most pressing consequences of the economic crisis, we now have an obligation to continue the effort with actions that will broaden the productive base of our economy, render our development model more sustainable, actions that will include the exploitation of innovative technology, just like blockchain technology,” the Minister said.

Blockchain, he noted, “is a form of simplification and modernization, of cutting down red tape, but in a swift and completely transparent and secure manner.”

It allows transactions to be executed speedily, with transparency, security and immediacy, he added.

Georgiades said that the use of blockchain will bring about savings both in the public and the private sector.

He explained that the National Strategy includes the preparation of a draft legislation which is expected to be ready before the end of the year. He also said that there will be pilot implementation of blockchain technology starting with the Department of Land and Surveys, the Department of Customs and Excise, the Tax Department and the National Betting Authority. The third priority, he added, is the implementation of blockchain in the financial sector.

Georgiades said that the Ministry of Finance is the coordinator of this effort until the new Deputy Ministry for Digital Policy and Innovation starts its operation, hopefully on January 1, 2020.