EXPLAINER-How U.S.-China talks differ from any other trade deal 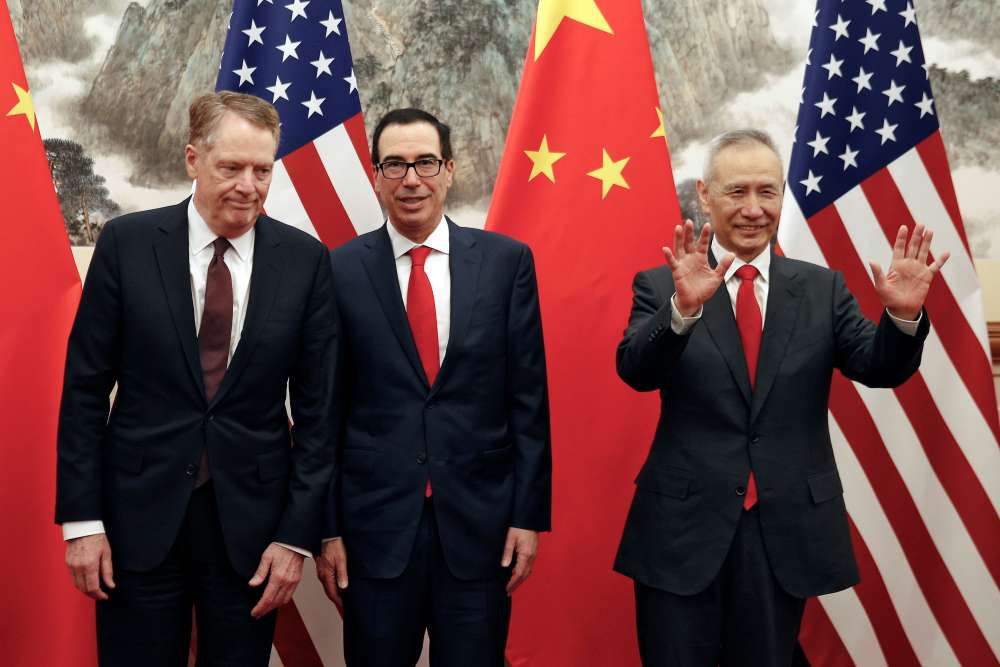 Chinese Vice Premier Liu He goes to Washington for trade talks on Thursday and Friday, setting up a last-ditch bid for progress toward a deal that would avoid a sharp increase in tariffs on Chinese goods ordered by U.S. President Donald Trump.

U.S. officials have accused China of reneging in the past week on substantial commitments made during months of negotiations to end their trade war, prompting Trump to set a new deadline to raise tariffs on $200 billion worth of Chinese goods to 25 percent, from 10 percent.

The higher tariffs will take effect at 12:01 a.m. EDT (0401 GMT) on Friday, a spokesman for the U.S. Trade Representative’s office said. That comes right in the middle of Liu’s visit.

Differences over the enforcement mechanism for a trade deal and a timeline for tariff removal have been sticking points.

Here is a breakdown of the issues unique to the two-way talks:

WILL A DEAL END THE THREAT OF TARIFFS ON CHINESE GOODS?

The United States has not made public any offers to lift tariffs, though Washington let slide a scheduled March 2 tariff increase on $200 billion worth of Chinese goods. But after accusations of China back-pedaling on commitments, Trump on Sunday made his threat to raise tariffs again this Friday.

U.S. officials see the continuing threat of tariffs as the “teeth” in any agreement. The United States says Chinese companies have coerced their U.S. partners into improperly transferring proprietary technology – an accusation Beijing strongly denies.

A demand for frequent compliance reviews reflects frustration among U.S. officials who have complained that China has failed to follow through on past commitments to implement free-market reforms.

HOW DOES THAT DIFFER FROM A NORMAL TRADE NEGOTIATION?

Traditional free trade agreements aim to lower trade barriers between the countries signing them. These trade deals are built on the assumption that the parties will adhere to the terms of the agreement, with the benefit being increased trade and export opportunities within the free trade zone.

The Trump administration imposed new tariffs on Chinese goods to try to force changes in China’s trade, subsidy and intellectual property practices – similar to financial sanctions that the United States has imposed on foreign entities to increase pressure on their governments for changes in behavior or policies.

Such sanctions are typically lifted only after the desired changes are verified by the U.S. Treasury Department.

HOW ARE TRADITIONAL TRADE AGREEMENTS ENFORCED?

Many free trade deals have built-in dispute settlement mechanisms for state-to-state disagreements over rule compliance, disputes between private investors and governments, or allegations of unfair anti-dumping and anti-subsidy duties. Arbitration panels often hear arguments from both sides, operating like a court.

Canada, for example, has brought challenges to U.S. anti-subsidy duties on softwood lumber before panels set up under NAFTA’s Chapter 19, a mechanism that would be continued if the new U.S.-Mexico-Canada Agreement (USMCA) if ratified. If Mexico fails to implement effective labor reforms, the United States and Canada could seek redress through arbitration. But critics, including many Democrats in Congress, argue that this enforcement mechanism is weak and largely untested.

The WTO’s 164 members can challenge each other over unwarranted trade restrictions, illegal subsidies and other unfair practices and seek resolution through dispute settlement panels. But this process is seen as slow, and its decisions too easy for countries to ignore.

The United States has argued that the WTO has failed to rein in China’s unfair practices, so it has acted on its own to force change in China.

The WTO’s appellate body also could grind to a halt this year as Washington is currently blocking the appointment of judges. Because three judges are needed to rule on appeals, the system could break down when two judges’ terms expire in December 2019.

CAN COUNTRIES JUST QUIT TRADE DEALS THEY DON’T LIKE?

Yes, most trade pacts have provisions for termination, but this has never been tested by the United States.

President Trump frequently threatened to quit NAFTA during negotiations last year, and his administration has considered issuing a six-month withdrawal notice as a tactic to pressure Congress into approving the trade deal that would replace it.

But some U.S. lawmakers and legal experts argue that Trump may not have authority to quit the agreement without Congress’ approval because the U.S. Constitution grants Congress explicit power to regulate commerce with foreign nations. Any move to quit NAFTA is likely to draw a court challenge.