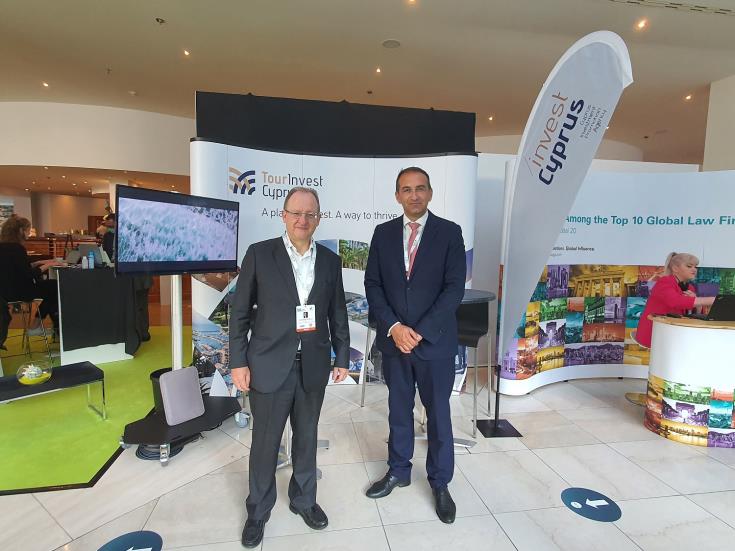 Cyprus’ comparative advantages as an investment destination and a competitive business hub, as well as the important investment opportunities that it offers, were presented by the Cyprus investment promotion agency “Invest Cyprus” at the leading annual conference and exhibition for the global hotel industry “International Hospitality Investment Forum”.

A press release of Invest Cyprus said that the Forum, held in Berlin between 1-3 September, gathered more than 1,200 participants from 80 countries, among which were people from the leading companies in the global hotel industry.

During a roundtable discussion, Director General of Invest Cyprus, George Kampanellas, highlighted the wide range of investment opportunities offered by Cyprus in tourism and hospitality, as well as its advantages that have earned it a leading position in the regional investment map, the press release reads.

Among the attendees of the discussion was Christophe de Bruyn, CEO of THR Tourism Industry Advisors and Mattias Innocenti, Development Director of ACCOR in the Southern Europe region.

Kampanellas presented the specialised unit TourInvest Cyprus tasked with providing guidance and support to foreign investors, as well as the platform “Project Bank”, a new initiative of Invest Cyprus for large-scale development projects in strategic sectors of the Cypriot economy that are promoted abroad in search for investors.

“What distinguishes Cyprus from other countries in the tourism industry is the fact that it also constitutes an important business hub in the region, with a significant number of foreign companies operating on the island”, Kampanellas noted. Cyprus, he said, remains one of the safest countries in the Mediterranean and is a quality destination providing great investment opportunities.

“We are particularly pleased that despite the difficulties caused by the pandemic worldwide, large foreign investments in the field of tourism and hospitality are being carried out at an intensive pace in our country”, he added.

In his intervention, de Bruyn stated that “as a result of the close cooperation with Invest Cyprus, in the context of devising a national strategy for attracting investment in the sector, it is clear that Cyprus can be an attractive destination for significant foreign investment, which will contribute to the national goals set by the state and which will simultaneously constitute the driving force for the recovery and further development of the industry”.

By gavriella
Previous articleAnnouncement by the Cyprus Post regarding fraud through email
Next articleHusband of woman hit by car in Pegia, arrested by Police