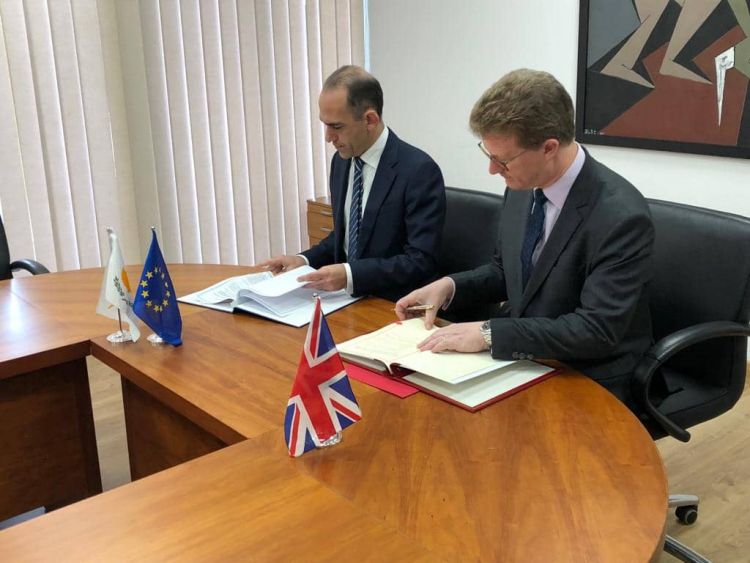 A protocol for the elimination of double taxation with respect to taxes on income and on capital gains and the prevention of tax evasion and avoidance was signed in Nicosia on Wednesday between the Republic of Cyprus and the United Kingdom, the Finance Ministry said.

The signed protocol introduces a grandfathering period for the calendar years ending on or before December 31, 2024 as relates to persons whose pension was subject to tax in Cyprus.

n his statements at the signing Georgiades said that the latest amendment of the Agreement created a framework that facilitates economic cooperation, fiscal stability and transparency in the relations of the two countries.

As he said, the first such agreement was signed in 1974, it was revised in 1980 and again in early 2018. He also noted that there was a large Cypriot community in the UK and an equally large community of citizens of the United Kingdom in Cyprus.

He also stressed the really excellent level of political and economic relations between Cyprus and the United Kingdom.

“The United Kingdom was and remains for us a strategic partner, a country with which we have relationships that could not really have been closer.  This is also true in the field of the economy and such an agreement, which must constantly be adjusted and modernised, serves to further expand the already very close economic and political relations,” he said.

The British High Commissioner expressed his satisfaction on the signing of the agreement.

He added that the agreement was particularly important given the close people to people links and the fact that they had very large Cypriot community in the UK and the around 70,000 Britons living in Cyprus.

As Lillie said, the agreement was very important for those individuals, as it modernised the double taxation agreement between the two countries, brought it in line with best practices and was also recognising the important circumstances and aspirations of the two communities.

By In Cyprus
Previous articleTurkish occupation forces to destroy used ammunition following death of 13 year old
Next articleReports: 100 left homeless in Nicosia, company says 70 left on own free will and were compensated (photos)