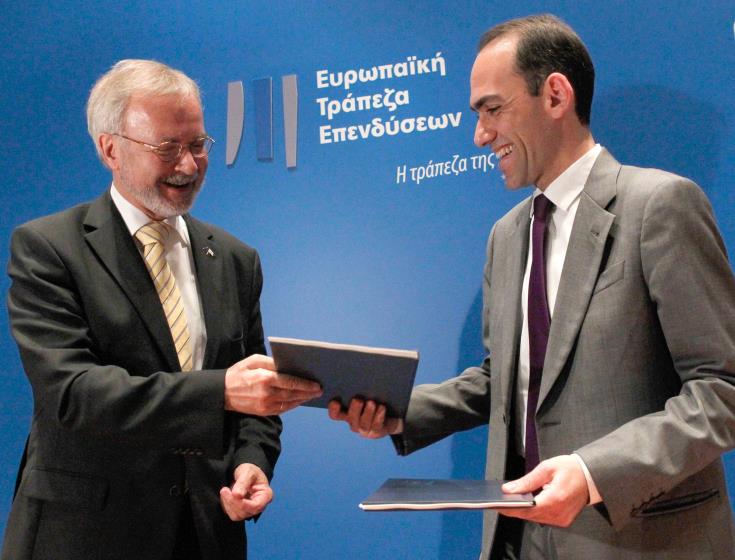 Finance Minister Harris Georgiades said on Monday that the government is in talks with the European Investment Bank (EIB) regarding  €150 million in financing for the construction natural gas infrastructure.

This was confirmed by EIB President Werner Hoyer who appeared optimistic that the credit institution will be able to take part in the project.

Georgiades and Hoyer spoke during a joint press conference, at the Ministry of Finance.

“From 2013 until today we have signed financing agreements of a value of €1.5 billion,” the Finance Minister said.

“Half of that amount is aimed at small and medium size enterprises through Cypriot banks, a tool which has contributed in a decisive way in the Cypriot economy’s recovery,” he noted.

He further said that during their meeting today, including with President Nicos Anastasiades “we have reconfirmed that this powerful and important cooperation will continue.”

The government, he continued, is interested in 2019 to maintain and expand on financing programmes for small and medium size enterprises.

However, Georgiades pointed out, “we are also interested in cooperating, financing, for a project of strategic importance, that of funding infrastructure for the natural gas to be transported and used in Cyprus.”

Talks for this large and important project is underway, he noted, adding that “we are interested in financing of up to €150 million and I hope that in the context of our cooperation we will have a positive outcome.”

Asked to give further details of the project he said that efforts are ongoing and that there is nothing to announce just yet. He said however that the government has already secured EU funding and is now interested in financing by the EIB. “I hope by the end of the year we will be in a position to announce something,” Georgiades said.

Replying to the same question, Hoyer confirmed that the EIB is in talks with the Cypriot government for the project. “I am quite optimistic,” he noted, adding that “we are presently of developing and publicly discussing a new energy lending policy, but I believe that even within the framework of the new policy we will be able to part of this exercise.”

“It is an important project also in view of climate action,” he stressed, adding that “the replacement of present fuels by this newly found gas or purchased is of course an improvement for Cyprus but also for the continent.”

EIB’s President referred to the investment made in Cyprus by the Bank, which has totalled €4 billion since 1981. Referring to the €1.5 billion investment made since 2013, he said that “it reflects the fact that “when the financial crisis hit and many banks left the country, we strongly increased our activities in Cyprus and we have not regretted it.”

“The Cypriot people faced some challenging years but we are confident that these are now behind us,” he noted.

He further expressed the view that “this is no doubt a testament to the hard work and resolve of the Cypriots and successful measures taken by the government and particularly by the Ministry of Finance.”

“Challenges still lie ahead and the EIB will continue supporting worthwhile projects that can accelerate economic growth and sustainable development, essential to further improving the Cypriot economic situation,” he added.

Since 2014, when we launched our SMEs and MidCaps scheme, the EIB has made €780 million available to locally active banks, she noted.

“In total €575 have been allocated that has supported more than 450 new investments by Cypriot companies,” Furstenberg said, adding that a significant percentage went to support the tourism sector.

The EIB official also said that in 2018 the bank signed new financing totalling €60 million to support public sector infrastructure investment. She explained that the relevant ministries promoting infrastructure projects can combine EIB and EU grants. “This improves absorption of EU structural funds and facilitates implementation of projects across a wide range of sectors, including waste treatment, water supply, transportation, urban regeneration, energy and environment,” she added.

“Looking ahead EIB’s activity in Cyprus is expected to remain robust in 2019,” she noted.

As the EU bank, she added, we will continue investing in sound and sustainable projects in line with EU policies such as energy efficiency and renewable energy projects which help combat climate change.

She also spoke of a will to assess possible solutions for accommodation for young couples and students and possible support for affordable housing.

Hoyer also outlined the global activity of the Bank for 2018, a year that marked its 60th anniversary.

“We signed 854 projects, which demonstrated our increased support for a larger number of smaller projects, he added.  According to Hoyer 56% of EIB’s clients are new clients.

Referring to the Bank’s plans for the future he said that “we now have to return for our normal business and that is to attack the structural weakness of the European economy and its industries.”  According to Hoyer “that is key because the global competition with big tectonic changes in geopolitics makes it necessary to restart the productivity engine in Europe and make us better prepared for the global competition of the next decades.”

“We have lost ground in the last years,” he said.

Georgiades expressed the government’s full and unreserved support to EIB plans for the bank to be fully capitalised following Brexit.

“We are absolutely convinced that EIB must continue to have a leading role,” he noted, adding that we consider the EIB as one of the most successful examples of a European institution which combines a targeted political direction with growth using market tools.

By In Cyprus
Previous articleHigh Commission calls for stories from Cypriot alumni of U.K. universities
Next articleYoung drivers fined, licence suspended for speeding