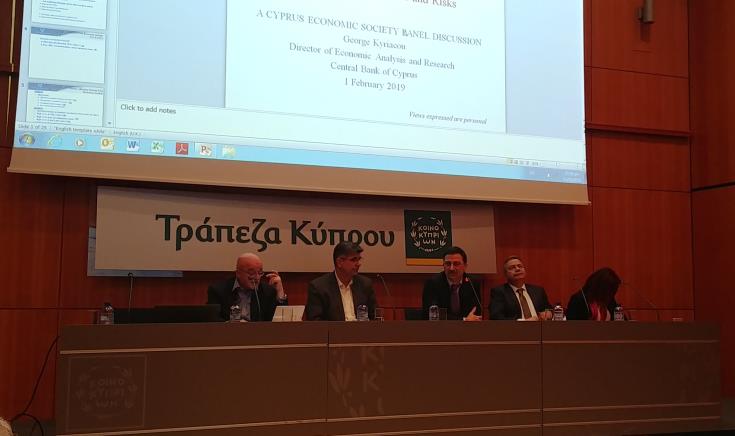 Risks, driven by world economy deceleration, Brexit as well as Cyprus’ domestic challenges are clouding the medium-term outlook of the Cypriot economy, an economic conference has heard.

All panelists in the Cyprus Economic Society conference titled “The Cyprus Economy Panel 2019: Medium term outlook and risks,” stressed the need for Cypriot authorities to maintain fiscal discipline, address challenges and promote structural reforms that would fuel the current momentum to the economy that help the island recover from the 2013 financial crisis.

Furthermore, the IMF local representative and the University of Cyprus’ Economic Research Centre said they are considering their projections for the Cypriot economy, as the Central Bank of Cyprus has already revised its outlook last December.

George Kyriakou, the CBC’s director of economic analysis and research said the Cypriot economic growth fueled by investments and strong domestic consumption will continue expanding albeit with some deceleration.

“There are a lot of risks, such as uncertainties in the external environment, the slowdown in the Euro Area, trade wars and Brexit,” he said, adding that domestic risks are associated with high public and private debt, high non-performing loans, which have declined but still are a long way from the EU average.

Kyriakou pointed out that there is a trend for rising public expenditure, highlighting that the rating agencies, some of which have upgraded Cyprus to investment-grade assume that strict fiscal policy will continue and that public debt will decline.

Concluding, Kyriakou described the Cypriot economy as a patient out of the hospital. “He is up and running, taking excessive risks, old habits are coming back. Are lessons from crisis wasted due to complacency?” he said.

On his part, Andreas Charalambous Director of Financial Stability in the Ministry of Finance said that positive growth is projected going forward but “there are currently more questions marks on the medium term,” citing less favourable external conditions.

“We are still confronted with favourable conditions in the near short term but the consensus is that in 2019 we will be observing moderation,” he said.

Charalambous noted that public finances portray a good image due to “extraordinary” high public revenue but warned that this image may change if revenue normalise.

He also said that revenue normalisation may affect the downward dynamic of Cyprus high public debt and underlined that it is high time for growth-enhancing structural reforms.

George Syrihas, former CBC executive director said that the international environment is less favourable for Cyprus due to Brexit, the economic slowdown in China and the euro area, as well as uncertainty associated with the US trade policy, risks which affect the risks on the growth projections.

“The balance is on the downside, so we are expecting a deterioration on the outlook. Impact of Brexit on Cyprus could be important according to the developments,” he said.

“But the conditions are not so favourable now,” she said, adding that growth is estimated to slow down in the medium term, adding that the Fund is looking into revising its previous projection for a 4.2% growth rate in 2018.

She underlined that in the medium term the IMF expects growth to slow to its potential of 2.5%, as transitory effects of investment will gradually dissipate and Euro Area growth is decelerating.

But she stressed that the 2.5% projection assumes that Cyprus will show progress in implementing structural reforms.

“If we don’t have these reforms (growth) it will be less,” she added.