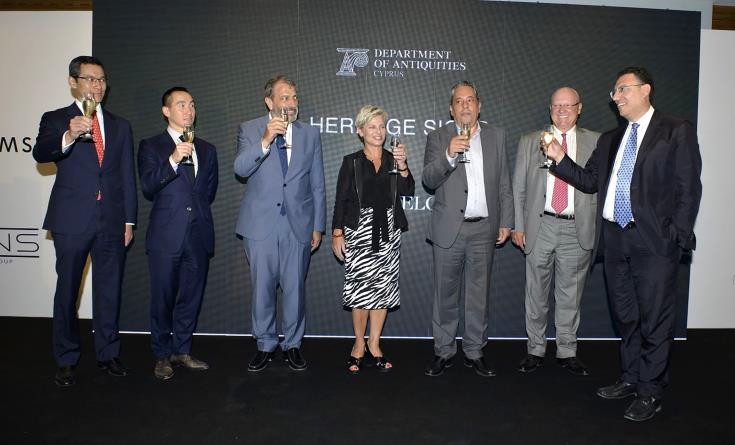 City of Dreams Mediterranean Integrated Casino Resort (ICR) in Limassol is scheduled to open in late 2021, with the total investment of the licensed company in Cyprus reaching €600 million.

At a press conference on Wednesday, Cyprus Casinos “C2” celebrated its first year of successful operations which commenced with the launch of the C2 Limassol “temporary casino” on June 28, 2018, and the first satellite casinos, C2 Nicosia and C2 Larnaca. Another two satellite casinos are expected to open soon, one in Ayia Napa later in July  and one in Paphos in the Geroskipou tourist area, by the end of the year.

Melco Resorts and Entertainment Limited (Melco) one of the world’s largest integrated resort operators, was granted an exclusive 15-year license to operate the first and only authorised casinos in the Republic of Cyprus.

Melco in collaboration with the Department of Antiquities in Archaeological Heritage Management, announced an initiative that will support on a long-term and continual basis the Government’s efforts to sustainably preserve and promote the culture of Cyprus.

This – Corporate Social Responsibility (CSR) initiative named «Heritage Signs» will actively promote the authenticity of the island’s most significant heritage sites by sponsoring heritage enhancements and information that will significantly improve the tourist experience when visiting these sites in Cyprus.

Speaking at the press conference, the Chairman and CEO of Melco Group, Lawrence Ho said he was very happy with the first year of operations in Cyprus, adding that progress has been swift, and the local economy was already benefiting from the strong partnership they’ve created with CNS Group.  Praising the government  of Cyprus for maintaining the highest standards, he said that “Cyprus will not only become a destination for premium luxury tourists, but for international investors too.”

“Everything is in place for significant and sustainable growth here in Cyprus. The government has a clearly-defined vision, the community is supporting us, and the success of the satellite and pop-up casinos we’ve already opened are evidence of strong consumer demand,” Ho said.

Once open, he added, “our ICR, City of Dreams Mediterranean will rewrite the tourism guides to Cyprus and make this beautiful island an internationally recognised year-round destination.”

“We are honoured that Melco’s efforts do not stop in providing entertainment through gaming but take a step further, investing in the development of the economy and stand by the society, by introducing a truly unique and innovative CSR initiative in Cyprus. We believe that this initiative will help to diverse cultural heritage of Cyprus and create an unforgettable learning experience for the visitors to Cyprus,” she said.

Property President of Cyprus Casinos “C2” and City of Dreams Mediterranean Craig Ballantyne, presented first year statistics highlighting that, “after one year of operation, we are already employing more than 800 people, the vast majority of them being Cypriot citizens, and Cyprus Casinos “C2” have recorded more than 880,000 visits from various countries with C2 Limassol accounting for approximately 710,000 visits, while recently opened C2 Nicosia accounted for 130,000 visits and C2 Larnaca for 40,000.”

He also expressed the belief that by this coming August, Cyprus Casinos “C2” would be welcoming its one millionth visit.

Vice President of Construction at Melco William Cornish, mentioned that the construction of the City of Dreams Mediterranean, was expected to be completed in 2021. As he said, city of Dreams Mediterranean “will be located in West Limassol and will be built according to the highest sustainability standards and adapted to the natural environment of the surrounding area”.

It will feature a sixteen-story five-star hotel with 500 guest rooms and suites as well as MICE facilities comprising 9,600 sq. metres. The gaming area totals 7,500 sq. metres and will include over 100 tables and 1,000 state-of-the-art gaming machines.