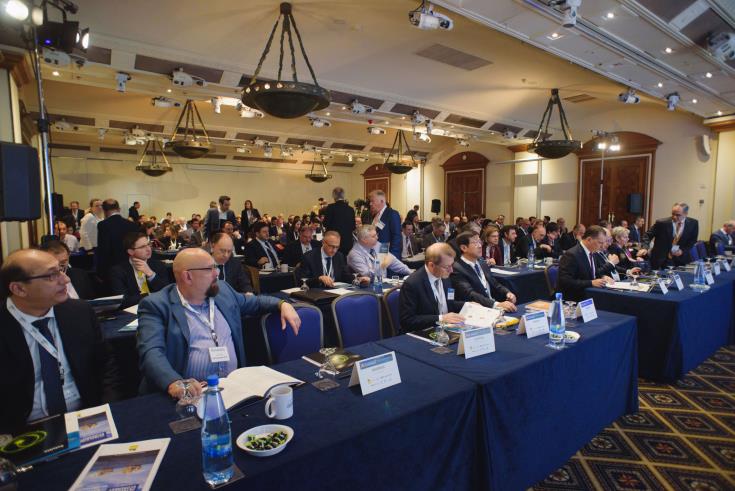 Hydrocarbon companies active in Cyprus are asking the government to find immediate solutions for infrastructure-related issues and for the companies providing supporting services.

Representatives of ENI, Total and ExxonMobil, attending the 6th Eastern Mediterranean Gas Conference in Nicosia, also referred to Cyprus’ capacity to become a hub to provide services for hydrocarbon activities and underlined the need to find immediate solutions, in order for Cyprus to gain a competitive advantage against other players.

Allesandro Barberis, the Managing Director of ENI Cyprus, referring to Cyprus’ advantages, talked about the country’s position, its EU membership and it’s attractive fiscal system. Challenges remain, he went on, referring to the lack of existing infrastructure and port facilities. Barberis also noted a recent announcement for the creation of a new port in Vassiliko, expected to be ready in 2023.

“We need to have alternatives in the short and medium term” apart from long-term solutions, he underlined.

The ENI official added that Cyprus is in still in the exploration phase, while neighbouring countries are moving with a different pace. If Cyprus doesn’t take decisions soon, maybe it will not be able to compete with more advanced projects in the region, he said.

He also referred to the need for the government to provide incentives and concrete measure to companies, something which will allow Cyprus to play a different role in the area. “Cyprus has all the characteristics needed and we hope it will move in this direction,” he concluded.

Yves Grosjean, the General Manager of Total, spoke about the urgency to create a centre providing support services for hydrocarbon activities, noting that the work of specialised companies amounts to more than 80% of the total working hours when drilling. Their work involves among others conducting environmental surveys, monitoring, drilling, plumbing and waste management he said. These companies need infrastructure and highly-skilled technicians and engineers, he added.

Talking about Cyprus’ development into a service centre, Grosjean said this is a long-term prospect which will only materialise with the discovery of large quantities of energy resources, maybe in 5-10 years’ time.

Varnavas Theodosiou, ExxonMobil Managing Director in Cyprus, talked about the need to have a stable and predictable investment climate in Cyprus. He also said that the process to license the company and proceed with the drilling of the wells in Cyprus’ exclusive economic zone (EEZ) block 10 was fast.

Speaking about challenges, he said that the government should institutionalise a one-stop-shop to allow companies to cope with bureaucracy.

The ExxonMobil official also said that in order to have more findings, increased activity is needed, and this cannot be done without facilities and service operators.

Charles Ellinas, CEO of E-C Natural Hydrocarbons Co. LTD said that Cyprus should focus on becoming a service centre and construct an LNG plant by using Israeli gas and existing discoveries in Cyprus’ EEZ, including the Glaucus, Aphrodite and Calypso reserves.

“The longer we leave it the most difficult it becomes” he said. Ellinas also predicted that LNG needs in Europe will decrease, also due to the use of renewable energy sources.

Referring to the possibility of Turkey drilling in the south of Cyprus, Ellinas said this would be a huge destabilisation factor and the government must be ready for this.

Andreas Koutsoulides, Commercial Lead at Cyprus Hydrocarbons Company, analysed Cyprus’ basic choices for the exploitation of its energy resources. He said that the government’s number one priority is the construction of an onshore LNG plant at Vasiliko, calling it a strategic plan with additional effects for Cyprus’ economy. For this to happen, a minimum of 10-15 tcf of natural gas are required, he went on.

Furthermore, he spoke about existing LNG plants in Egypt, saying that they come as a second choice. He added that after 3 years, relations between the two governments have matured and there is a good understanding.

As for the option of a Floating LNG facility, Koutsoulides said this technology is considered to be mature enough and Cyprus is looking at that very carefully, since it provides a lot of flexibility in terms of location and a much lower cost.

Finally, he said that decisions on the EastMed pipeline project are currently on a political level, aiming at establishing the right intergovernmental framework.