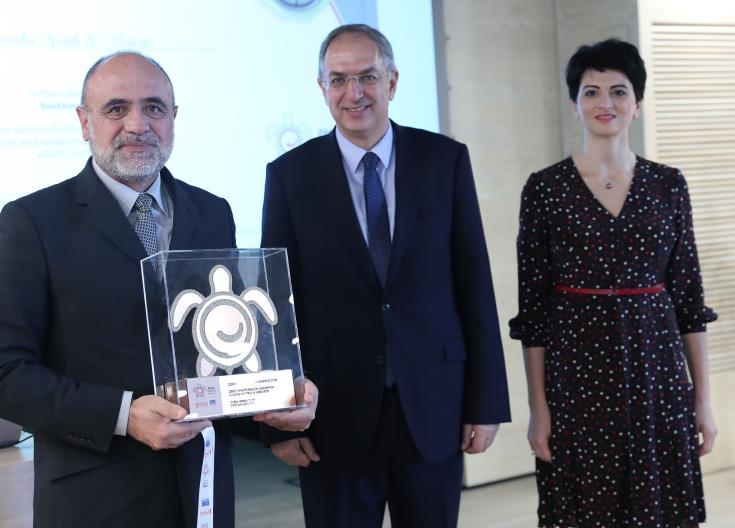 Five coastal companies have been awarded for their sustainable practices to tackle marine plastic pollution, following a competition under the “Zero Waste Beach” programme, an initiative of the Project and Research Center “AKTI” and the Coca-Cola Foundation.

The aim of the competition was to highlight the sustainable practices of coastal businesses to effectively reduce their plastic waste.

The “Zero Waste Beach Awards 2018”, were handed out by the Minister of Agriculture, Rural Development and the Environment, Costas Kadis, during a ceremony at Leventis Art Gallery.

In his speech during the ceremony, Kadis referred among  others, to the Ministry`s intention to proceed to the complete ban on the plastic bag during the next period, after the great public interest shown in reducing the use of plastic bags at supermarkets and other stores, which led to a reduction of more than 80%.

At the same time, he said that the Ministry is conducting information and public awareness campaigns on the problem of marine waste through MELTEMI research project. He also said that the Ministry is head of 13 partner countries in the Interreg Med Blueislands Program, with the aim to manage common challenges that the Mediterranean islands face, such as rational management of natural resources and waste and sustainable tourism. As he said, measurements and recordings made under that program showed that the percentage of plastic discharges in the seas and beaches doubled during the tourist season while beach sand samples showed the presence of microplastics. For Cyprus, measurement of sand samples showed the presence of about 17 microplastic objects per kilo of sand.

Kadis also said that the problem of marine plastic pollution is one of the largest facing the planet today.

As he explained, 90% of garbage in the seas and oceans is plastics, which remain in the marine environment and enter the human food chain through fish consumption. He added that disposable plastics, such as glasses, straws, dishes, cutlery, are the objects that most often appear on the beaches and account for about half of the marine litter.

The reduction in the consumption of disposable plastics, he added, “is a priority for the protection of the marine environment”.

President of the Board of Akti CenterXenia Loizidou, said that the results of the actions developed under the “Zero Waste Beach” will be the basis for policy development and the implementation of further targeted actions. The goal of the organizers, as he said, was to make the awards a yearly institution.

The Environmental Responsibility Award was given to ATLANTICA SUNGARDEN HOTEL (Ayia Napa).

The Social Responsibility Award was given to OCEAN BASKET Group, consisting of ten restaurants, in all the free cities of Cyprus, with four of them, located in coastal areas (Paphos, Limassol, Larnaca, Ayia Napa).

The Municipality of Geroskipou, the Kissonerga Community Council and the Green Point of Kolonis in Paphos were also awarded for their support to “Zero Waste Beach`s” actions.

As it was noted, 54 coastal companies have applied to participate in the competition with specific practices they apply

By In Cyprus
Previous article
Facebook discovers bug that may have affected up to 6.8 mln users
Next article
Strasbourg market reopens after terrorist attack