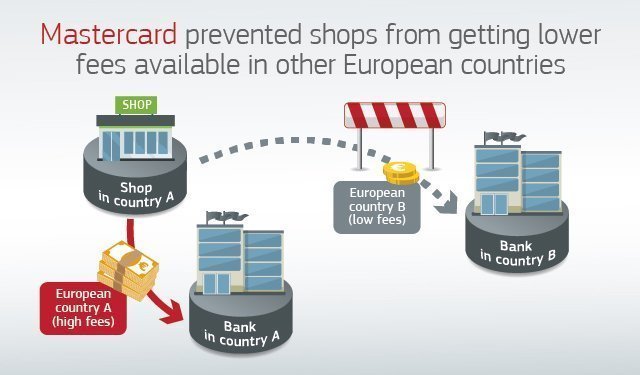 The European Commission has fined the card scheme Mastercard €570.566m for limiting the possibility for merchants to benefit from better conditions offered by banks established elsewhere in the Single Market, in breach of EU antitrust rules.

Commissioner Margrethe Vestager, in charge of competition policy, said: “European consumers use payment cards every day, when they buy food or clothes or make purchases online. By preventing merchants from shopping around for better conditions offered by banks in other Member States, Mastercard’s rules artificially raised the costs of card payments, harming consumers and retailers in the EU.”

Mastercardis the second largest card scheme in the European Economic Area (EEA) in terms of consumer card issuing and value of transactions.

Mastercard acts as a platform through which issuing banks provide cardholders with payment cards, ensure the completion of the card payment transaction and transfer funds to the retailer’s bank.

Card payments play a key role in the Single Market, both for domestic transactions and for payments across borders or over the internet. European consumers and businesses make more than half of their non-cash payments through cards.

When a consumer uses a debit or credit card in a shop or online, the bank of the retailer (the “acquiring bank”) pays a fee called an “interchange fee” to the cardholder’s bank (the “issuing bank”). The acquiring bank passes this fee on to the retailer who includes it, like any other cost, in the final prices for all consumers, even those who do not use cards.

Mastercard’s rules obliged acquiring banks to apply the interchange fees of the country where the retailer was located.

Prior to December 9, 2015, when the Interchange Fee Regulation introduced caps, interchange fees varied considerably from one country to another in the EEA. As a result, retailers in high-interchange fee countries could not benefit from lower interchange fees offered by an acquiring bank located in another Member State.

In April 2013, the Commission opened a formal antitrust investigation against Mastercard to assess whether these rules on ‘cross-border acquiring’ were in breach of EU antitrust rules. In July 2015, the Commission issued a Statement of Objections.

The Commission investigation found that because of Mastercard’s cross-border acquiring rules retailers paid more in bank services to receive card payments than if they had been free to shop around for lower-priced services. This led to higher prices for retailers and consumers, to limited cross-border competition and to an artificial segmentation of the Single Market.

On this basis, the Commission concluded that Mastercard’s rules prevented retailers from benefiting from lower fees and restricted competition between banks cross border, in breach of EU antitrust rules. The infringement ended when Mastercard amended its rules in view of the entry into force of the Interchange Fee Regulation.

As a result, the Commission decided to impose a fine on Mastercard.

Mastercard cooperated with the Commission by acknowledging the facts and the infringements of EU competition rules.

The Commission granted Mastercard a 10% fine reduction in return for this cooperation.