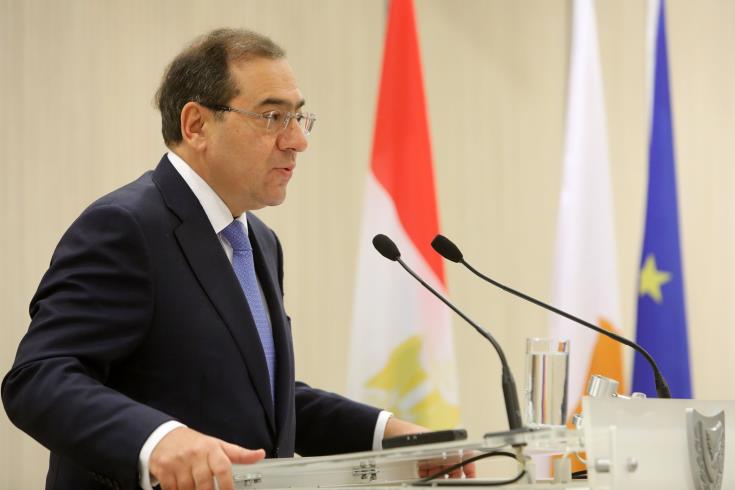 The agreement between the governments of Egypt and Cyprus on the Aphrodite gas field has generated keen interest among international oil companies, down streamers and financial institutions, says the Minister of Petroleum and Mineral Resources of Egypt Tarek El-Molla.

In an interview with CNA, the Egyptian Minister said that after the important umbrella agreement for building a gas pipeline between the two countries, discussions are now taking place to accelerate the process after completing the constitutional and legal procedures at each country, which should then be followed by a commercial agreement for the project.

The Minister also stressed the multiple benefits for Cyprus from cooperating with Egypt in the framework of the recently established Eastern Mediterranean Gas Forum (EMGF). As he said, Cyprus could benefit from EMGF by quick monetization of its current reserves, potential increase in future discoveries and integration with other parties in the value chain, opening new opportunities of cooperation and stable technical and commercial cooperation.

Cyprus, Greece, Egypt, Italy, Israel, Jordan and Palestine participate in the East Mediterranean Gas Forum, which is based in Egypt and its objective is the optimal joint exploitation of hydrocarbon resources in the Eastern Mediterranean.

El-Molla also referred to the political benefits from such a cooperation, saying that the discussion on gas matters could be a start for further resolutions of other conflicts and sent the message to the world that the region is a “safe and secure environment for investment”.

He also expressed the view that Egypt is “the most ready option with the least risk” for gas supply of Europe, due to the good political relations with everyone and the new business environment in Egypt.

Pointing out that Egypt is the best option both economically and politically for all East Med Gas to access potential markets, El-Molla said that the existing LNG facilities and infrastructure give Egypt a competitive edge,  making it the most economic option. As for the option of East Med pipeline between Cyprus, Greece, Israel and Italy, he said that  the feasibility study for the project would take up to 2 years, “which in itself is a luxury the region can’t afford anymore”.

The Mister also described the new business environment in Egypt for oil and gas sector, after the discovery and development of the Zohr field, which as he said showcases “how business is done nowadays in Egypt”.

The discovery of Zohr field gave a significant boost to the gas sector in Egypt. What are your next steps and goals in relation to both the domestic and the foreign market?

This is true, Zohr field is the icon of many achievements in the Egyptian Petroleum Sector. It’s significance is not only in its size but what is more important is that it materialises many breakthroughs achieved; starting by the world record achieved in its development and reaching high production rates which was a result of the trust Egypt could build allowing our partner ENI to inject these huge investments in that short period and the extraordinary facilitation and seamless efforts from the whole Egyptian government -powered by extreme political support- to cater all the requirements for this development.

This is a showcase of how business is done nowadays in Egypt, “We take it seriously”. The impact of Zohr is also a showcase on how serious work can drastically turn-over challenges; thanks to Zohr and many other success stories of other discoveries, Egypt reached self-sufficiency in Gas in September 2018 after years of importing gas to avoid electricity cut-offs. This self-sufficiency significantly boosted the Egyptian economy, secured energy for electricity and industry, it also enabled Egypt to resume exports and start fulfilling its contractual commitments.

It is worth mentioning that the success stories in E&P (exploration & production) are done within a broader context of overall transformation in the oil and gas sector; whether in local Gas market reforms; establishing an independent regulator and issuing a gas law enabling third party access, or in the expansion of foreign cooperation with the EU and many countries and international partners.

These transformation efforts were topped up by a comprehensive “Modernisation Project” targeting the technical, organisational and human capabilities of the sector. We will keep our modernisation efforts towards an efficient sector capable of attracting investments and offering world-class business opportunities to Oil & Gas industry players, and to maximise our contribution in the Egyptian GDP and be the vehicle for the economic growth.

Egypt is planning to become a regional hub for energy and Europe is a targeted market. Do you think that you can withstand the competition from other suppliers?

Turning to a regional hub is a main pillar in our modernisation Project. We perceive Europe as our primary targeted market. We have taken many steps towards this goal. We signed an MoU with the EU on strategic partnership in energy in April 2018; including EU’s support to Egypt to turn into a regional energy hub.

We are also working on developing our internal capabilities whether by upgrading our infrastructure or setting the legal, regulatory and governance requirements to be the destination of choice to foreign investments and become the gateway for regional gas to markets. On another level, we are developing our bilateral and multilateral external relations to open channels with all partners and stakeholders.

Competition is always there. Yet, we believe in cooperation and integration rather than competition, as there is always room for everyone to benefit if the business is growing enough; and this is exactly what we are working on.

As for Egypt, we have a lot to offer to Europe and to the various market players to keep our competitive edge over other options. Our most important asset is the good political relations with everyone and the open floor to host all business parties, coupled with our new business environment in Egypt.

We believe Egypt is the most ready option with the least risk. LNG is a flexible option in responding to market variations when compared to pipelines, and we already have two LNG facilities with expandable capacities, in addition to the Pipelines to Israel and Jordan and the new pipeline which will connect with Cyprus.

How important is the newly established Eastern Mediterranean Gas Forum (EMGF) for your country?

As you mentioned in your previous question, Egypt is embarking on an ambitious program to become a regional energy hub, with Gas as the most important pillar, we do not intend to depend only on the Egyptian resources and facilities. Our endeavour is to be the gate for all East Med Gas to access potential markets.

We are constantly enhancing bilateral and multilateral cooperation with all the relevant partners; an obvious example is the Egyptian – Cypriot – Greek cooperation going on the highest level. It’s now time to extend an umbrella to include all these cooperation efforts and to set a mechanism for a structured policy dialogue to build a shared vision and set the scene for a stable regional gas market; one that can optimally utilise the current and future infrastructure to reduce cost and keep competitive edge, minimise risk, and encourage the quick monetisation of the regional reserves and attract more investments in the gas industry in East Med.

All these targets will have a great impact on the welfare of the whole region including Egypt. They are completely aligned with the general Egyptian policy, which adopts 1) cooperation and integration with all countries specially the neighbouring ones and reinforcing these relations with economic and commercial bonds, 2) sustainable economic development and investment attraction to achieve high growth rates and increase employment rates, 3) open market policy and 4) full utilisation all the Egyptian soft and hard assets and capabilities.
In this sense, we see the EMGF as a very important tool that will yield great benefits to Egypt and the region.

How can this Forum help smaller countries like Cyprus develop their reserves and benefit more from the region’s energy wealth?The EMGF will build a structured dialogue between all parties across the Gas value chain; Producers, Consumers, Transits countries and industry parties as well. This will in turn enable integration and shared use of existing and future infrastructure. It will significantly impact the feasibility thresholds of new infrastructure allowing small reserves to be quickly monetised. The EMGF will also allow a clear vision for the region’s gas future encouraging more E&P activities.
Cyprus will benefit from EMGF in many ways; by quick monetization of its current reserves, potential increase in future discoveries and integration with other parties in the value chain opening new opportunities of cooperation and stable technical and commercial cooperation.

What are the political benefits of this cooperation and how important is the participation of both Egypt and Israel in this Forum?

There is no doubt that “Economy makes Politics”. Cooperation under the EMGF will help all members have common goals and possess win-win situations; they can realize benefits through cooperation more than what might be gained through conflicts.
It is very important to sit together on one table and discuss our concerns and find a resolution in gas matters, this can be a start for further resolutions of other conflicts.

Another very important point is the external image; this region has been perceived as a conflict zone for a long period, it is about time now that we start sending a different message to the world, and build trust that this is a “safe and secure environment for investment”. This image will benefit all of us and open lots of opportunities in many fields; not just in the Gas industry.

Egypt signed an agreement with Cyprus to connect Aphrodite gas field to its liquefaction plants for re-exportation. However, there was not a commercial agreement yet. Do you think that this project could soon proceed to the commercial exploitation stage?

The Governmental agreement signed between Egypt and Cyprus was indeed very important as an umbrella to encourage investors. It highly emphasiaes the two governments’ support and commitment of this cross-border project. As a result, we have witnessed great interest from the IOCs, down streamers and financial institutions. Discussions are now taking place to accelerate the process after completing the constitutional and legal procedures at each country. This shall then be followed by a commercial agreement for the project.

What do you think about East Med gas pipeline between Cyprus, Greece, Israel and Italy? Do you think the project is feasible and economic viable?

When it comes to the East Med, I would say that the options are many. Nevertheless, we believe that Egypt is the best option both economically and politically. The existing LNG facilities and infrastructure give Egypt a competitive edge, since each existing facility would now cost around 10 US Billion Dollars to implement, making it the most economic option.

Additionally, Egypt’s policy is open market and seeking maximum benefit of all parties, both producers and consumers. We encourage any options that can help producers utilize their resources and consumers secure their needs in the most efficient, quick and sustainable way and with the least cost; to save any avoidable expenses to the economies of the countries on both sides.
The feasibility study for the East Med gas pipeline project will take up to 2 years, which in itself is a luxury the region can’t afford anymore.