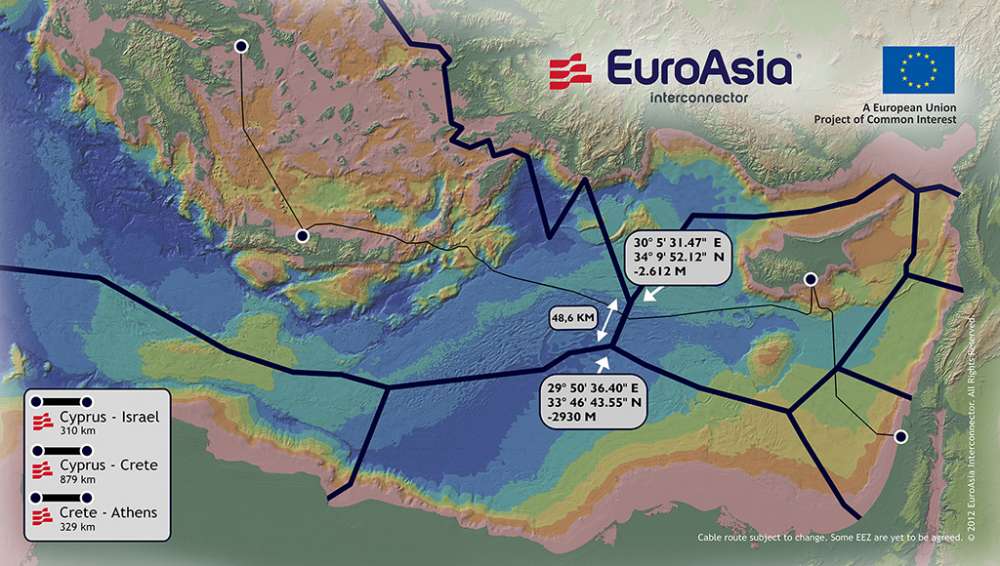 The European Commission, the Cyprus authorities and the official Project Promoter have reiterated their support for the timely implementation of the EuroAsia Interconnector electricity interconnection linking Cyprus, Israel, Crete and Attica in Greece within the framework of the Projects of Common Interest (PCI) list of priority electricity corridors.

The involved parties, meeting in Nicosia, reviewed the progress achieved in the implementation of the project in its entirety, as well as recent developments, and in particular in relation to the Crete-Attica link, expressing the paramount importance of the EuroAsia Interconnector as regards energy efficiency, security of supply and ending the energy isolation of Crete, and Cyprus as the last electrically isolated EU Member State, and to achieve European energy targets.

The meeting recognised EuroAsia Interconnector as the official Project Promoter, who has continuously acting within the context of the Regulation. The progress achieved so far was welcomed by all sides. A briefing followed on the considerable progress achieved, among others, in project financing, licensing, etc., and more specifically the procurement process, which is in the final stage of the issue of the Invitation to Tender (ITT), having already received comments from the prequalified tenderers.

The participants recognised that the best way to ensure the timely and efficient implementation of PCI 3.10 in its entirety, and in particular the Crete-Attica section (PCI 3.10.3) and thereof the optimal interoperability between all the sections, is under the provisions of the Roadmap of the European Commission (16.10.2018) with the support and participation of all involved parties in Cyprus and Greece.

The participants expressed their  sincere desire that the Greek side will resume discussions to implement the project under the PCI TEN-E Regulation and following the Roadmap of the European Commission which was already preliminary agreed, for the mutual benefit of all stakeholders, partners and communities.