Cyprus as an alternative investment destination in view of Brexit 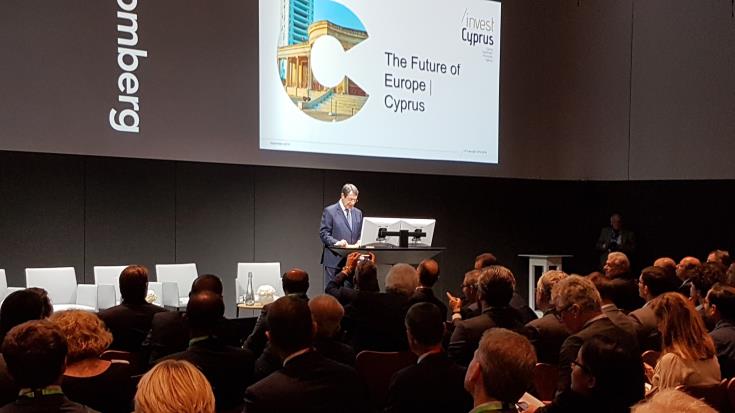 Cyprus’ investment opportunities in view of Brexit were presented by the Cyprus Investment Promotion Agency (Invest Cyprus) at an event held in London on Friday on the future of Europe and Cyprus.

The event was co-organised by the Agency and Bloomberg at the new headquarters of the international news agency and held under the auspices of the President of the Republic, Nicos Anastasiades.

In his introductory speech, the president focused on the bilateral relations and the mutual support between the UK and Cyprus within the framework of the EU and the Commonwealth, as well as the wider international stage. He also referred to the strong financial and commercial ties between the two countries.

He gave his assurance that Cyprus will help in the ongoing dialogue on Brexit. He said that the goal is to reach to a mutually beneficial agreement and confirmed that he will step up efforts to further reinforce the bilateral relations between the two countries.

The President of the Cyprus Investment Promotion Agency, Michalis P. Michael underlined the advantages that Cyprus can offer as a headquarters of international investments.

He underlined the very important return of Cyprus to Investment Grade status after 6.5 years, highlighting that this development is an essential confirmation of the prudent management that the government has followed and keeps following, in order to create conditions for sustainable and long-term economic growth.

At the same time, as he underlined, this development reveals the full recovery of the global community’s confidence in Cyprus as an investment destination. Michael referred extensively to the role of the Cyprus Investment Promotion Agency and its effort to reinforce the country’s competitiveness as well as attract added-value investments, which will lead to the creation of new job positions and will stimulate the business and investment activity. In view of Brexit,  Michael assessed that even greater opportunities have opened up for the promotion of Cyprus as an attractive destination for companies who wish to transfer their headquarters or part of their multinational activities to the island.

The first thematic area concerned the viable growth of financial services, the second concentrated on Cyprus’ business environment in view of Brexit, while in the third thematic area, representatives of multinational companies with headquarters or investments in Cyprus shared valuable information with regards to the fields of development, as well as the opportunities and challenges that Cyprus provides, based on their own experiences.