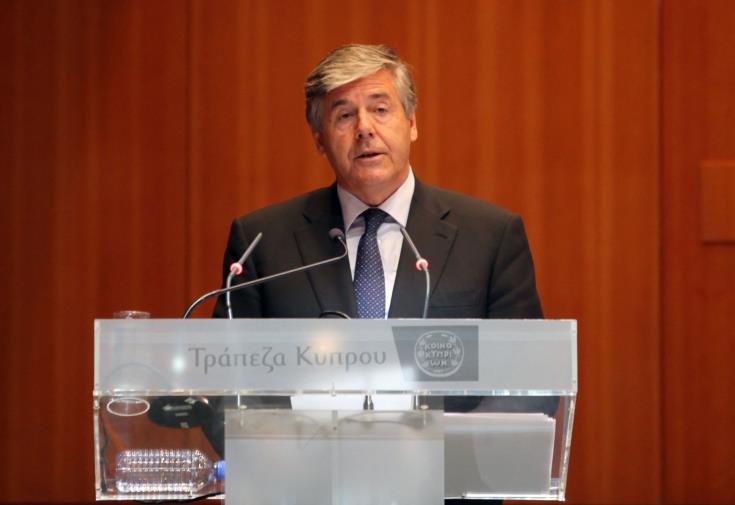 Additional EU regulations, such as the Minimum Requirements for own funds and Eligible Liabilities (MREL) will be particularly demanding and damaging for small banks in the EU, including Cyprus, Josef Ackermann, Chairman of the Bank of Cyprus Board of Directors has said.

Addressing the 9th Limassol Economic Forum, Ackermann referred to the different policy response to the 2009 financial crisis between the US and Europe, which brought the US banks to a better position compared with European peers.

“The American regulatory response was very different from that chosen by Europe, and I think, Europe is paying and will continue to pay a high price for this,” he said.

The Swiss banker said that while the Trump administration in the US is relaxing regulations which tilts the balance of the regulatory burden between the European and the US banking systems further in favour of the later, local regulators plans to enforce new rules, such as MREL.

MREL, the Minimum Requirements for own funds and Eligible Liabilities, will be particularly demanding and damaging for small banks, including Cypriot banks, he said.

The Bank of Cyprus chairman also noted that European Banks remain vulnerable as reform of the banking sector is incomplete, the arrangements for bank resolution are not yet fully settled while the European Deposit Insurance Scheme has not yet been agreed, due to concerns raised by some key EU countries.

He also called “for a judicious balance between micro-prudential regulations and strict financial stability on the one hand, and consideration of the role banks can and should play in promoting growth on the other,” noting that excessive emphasis on maximising financial stability through new provisions and capital increases could undermine unduly bank profitability and the banking system’s capability to contribute to growth.

According to Ackermann, the US, the main scene of the crisis, site of the most spectacular bank failures and home of the major banks accused of causing the crisis, now dominates the global capital market business more than ever before, whereas “their European competitors, meanwhile, have fallen almost hopelessly behind, especially in their investment banking activities.”

Ackermann furthermore said that there is no evidence of a strong commitment by European policy makers to the global competitiveness of a key industry such as the financial industry, for example by resolutely promoting a common banking market that would make cross-border mergers more attractive. “There is still time for a reversal. But not for long,” he noted.

The financial world is a safer place 10 years after the financial crisis, but not fully safe, particularly in Europe, he said.

“Many people agree that there is a risk of a new crisis, though we cannot tell when, where and how it would happen,” he concluded.

By In Cyprus
Previous article
Facebook hires Nick Clegg as head of global affairs
Next article
Spehar: Important crossroad in Cyprus with respect to peace process