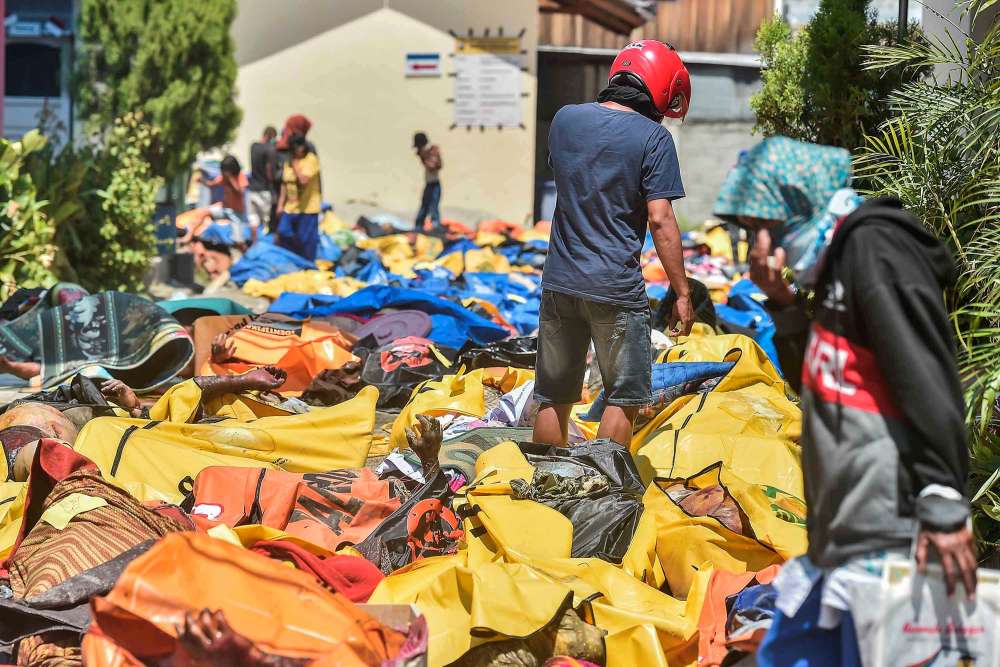 The confirmed death toll from the earthquake and tsunami that struck the Indonesian island of Sulawesi has risen to 832, and the vice-president, Jusuf Kalla, has warned it could reach into the thousands.

821 of the deaths were in the city of Palu, with 11 casualties so far recorded in Donggala, the worst-hit area which is home to 300,000 people. Hundreds of bodies have been found on beaches and authorities fear many may have been washed out to sea.

Speaking at a press conference, Sutopo Purwo Nugroho, the spokesperson for the BNBP disaster agency, said that the affected area was much bigger than originally thought.

“The deaths are believed to be still increasing since many bodies were still under the wreckage while many have not able to be reached,” said Sutopo, emphasising that access to Donggala, as well as the towns of Sigi and Boutong, was very limited so the final death toll was impossible to predict.

The city of Palu has been completely devastated by the earthquake and tsunami waves, which reached as high as six metres in some areas. In the city, partially covered bodies lay near the shore and survivors sifted through a tangled mess of corrugated steel roofing, timber, rubble and flotsam. One man was seen carrying the muddy corpse of a small child.

“Many corpses are scattered on the beach and floating on the surface of the sea,” one local resident, Nining, told local media. The identified bodies are being buried in mass graves, Sutopo said.

Sutopo confirmed there was no electricity in Palu and Donggala, while drinking water and fuel were running out. There was limited access to heavy equipment needed to help rescue efforts, so the search for people trapped in the rubble was mostly being carried out by hand.

Rescue efforts are ongoing for dozens of people still trapped in the collapsed ruins of the eight-storey Roa Roa hotel in Palu, with voices heard screaming from the wreckage. “There are 50 people under the rubble of the building. Heavy equipment is needed for evacuation,” said Sutopo.

There were concerns about the whereabouts of hundreds of people preparing for a beach festival that had been due to start on Friday, a spokesman for the BNBP said.

At least 540 people had been badly injured, the agency said, as hospitals struggled to cope with the influx of casualties, setting up open-air clinics to treat the injured.

Dwi Haris, who suffered a broken back and shoulder, rested outside Palu’s army hospital, where patients were being treated outdoors due to the strong aftershocks which continued. Tears filled his eyes as he recounted feeling the violent earthquake shake the fifth-floor hotel room he shared with his wife and daughter.

“There was no time to save ourselves. I was squeezed into the ruins of the wall, I think,” said Haris, adding that his family was in town for a wedding. “I heard my wife cry for help, but then silence. I don’t know what happened to her and my child. I hope they are safe.”

The Indonesian president, Joko Widodo, who visited the region on Sunday, said earlier the military was being called in to the region to help search-and-rescue teams.

Indonesia is one of the most disaster-prone nations on earth. It lies on the Pacific “Ring of Fire”, where tectonic plates collide and many of the world’s volcanic eruptions and earthquakes occur.

Earlier this year, a series of powerful quakes hit Lombok, killing more than 550 people on the holiday island and neighbouring Sumbawa.

Indonesia has been hit by a string of other deadly quakes including a devastating 9.1-magnitude tremor that struck off the coast of Sumatra in December 2004.