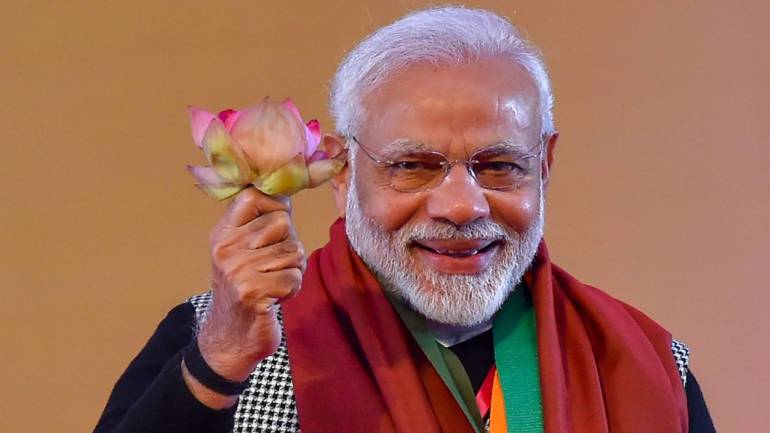 Indian Prime Minister Narendra Modi is likely to return to power with an even bigger majority in parliament after a mammoth general election that ended on Sunday, exit polls showed, a far better showing than expected in recent weeks.

Modi faced criticism early on in the campaign for failing to create jobs and for weak farm prices, and analysts as well as politicians said the election race was tightening with the main opposition Congress party gaining ground.

But he rallied his Hindu nationalist base and turned the campaign into a fight for national security after tensions rose with Pakistan and attacked his main rival for being soft on the country’s arch foe.

Modi’s National Democratic Alliance (NDA) is projected to win anything between 339-365 seats in the 545-member lower house of parliament with the Congress party-led opposition alliance at a distant 77 to 108, India Today Axis exit poll showed.

To rule, a party needs to win 272 seats. Modi’s alliance won 336 seats in the 2014 election. The exit polls showed that he not only held to this base in the northern Hindi belt but also breached the east where regional groups traditionally held sway.

Only the south largely resisted the Hindu nationalist surge, except for Karnataka, home to software capital Bengaluru.

Counting of votes recorded in hundreds of thousands of computerised machines will begin early on Thursday and results are expected by noon.

According to another poll released by Todays Chanakya, Modi’s alliance is likely to get around 350 seats. One poll by Neta Newsx, though, forecast Modi’s group falling 30 seats short.

Exit polls, though, have a mixed record in a country with an electorate of 900 million people – around two-thirds of whom voted in the seven-phase election. They have often gotten the number of seats wrong, but the broad direction has generally been correct, analysts say.

With three out of four of the polls indicating a clear majority for Modi’s alliance, Indian equity markets are expected to rally sharply on Monday, while the Indian rupee is also likely to strengthen versus the U.S. dollar, according to market participants.

A clear win would mean Modi can carry out reforms investors expect to make India an easier place for doing business, they said.

“I expect a positive reaction from markets on both the rupee and equities,” said Sajal Gupta, head of forex and rates at Indian brokerage firm Edelweiss Securities.

“Equity indices should have a rally of maybe 250-300 points,” said Gupta, adding the Indian rupee may test the 69 level against the U.S. dollar before retreating.

But a big win for Modi would fan fears that Hindu hardliner groups would be further emboldened to pursue partisan programmes such as punishing Muslims for the slaughter of cows, considered sacred by Hindus, rewriting school textbooks to reduce India’s Muslim history and attack liberals.

Critics say Modi sought to win votes by stoking fear among the Hindu majority of the potential dangers posed by the country’s Muslims and Pakistan, and promoted a Hindu-first India.

But his supporters say Modi and his allies are simply restoring Hinduism to its rightful place at the core of Indian society. Muslims make up about 14% of India’s 1.3 billion population.

“The massive crowds and response at every rally of Prime Minister Modi were a clear indicator of their approval for his leadership, the performance of the past five years and the vision for the future,” Nalin Kohli, a spokesman of the ruling Hindu nationalist Bharatiya Janata Party said.

Dilip Agrawal, 46, who runs a mill in the central state of Madhya Pradesh, said he had voted for Modi, despite the difficulties faced by farmers.

“He is doing so much for our country, our national security. Of course farmers want better rates than they are getting, that’s only natural. Only a strong leader can meet our aspirations, and Modi is that leader.”

The Congress pary led by Rahul Gandhi, the fourth generation scion of the Nehru-Gandhi dynasty that ruled India for decades following independence, focused on Modi’s failure to deliver on the promises he made to transform the economy and turn India into a manufacturing hub.

Congress spokesman Sanjay Jha dismissed the poll projections, saying that an alliance led by his party would defeat the BJP when votes are counted on May 23.

Mamata Banerjee, the chief minister of West Bengal state and a bitter opponent of Modi, said the fight was not over.

“I don’t trust exit poll gossip,” she said on Twitter. “I appeal to all opposition parties to be united, strong and bold. We will fight this battle together.”

Voting began on April 11 and ended on Sunday in the world’s biggest democratic exercise.

Although Modi’s party is poised to lose seats in northern Uttar Pradesh, which elects the most lawmakers out of all Indian states, the party’s return to power will be on the back of a strong showing in other northern heartland regions and two eastern provinces, CVoter’s polling showed.