In the interest of EU citizens for Turkey to be a candidate country, Kati Piri tells CNA 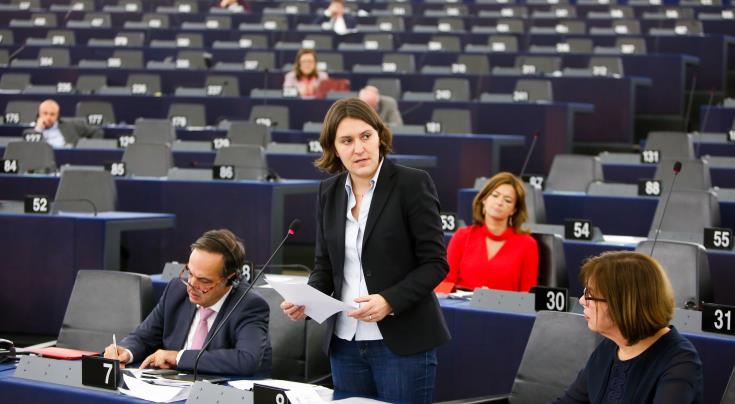 Turkey’s EU accession process is in the interests of European citizens and the EU itself, Rapporteur on Turkey’s EU progress in the European Parliament, Kati Piri has told CNA, while pointing out that there is a democratic deficit in Turkey.

In an interview with CNA, Piri also expressed the belief that Turkey remains oriented to the West and that President Recep Tayyip Erdogan does not wish to abandon the accession process.

Kati Piri, who is running for reelection to the European Parliament in the European elections in May 2019, also comments on the trust issues European citizens have towards EU institutions. “We cannot deliver,” she said and explained that people want solutions to their problems and they do not care whether the Council, the Commission or the Parliament would be the one to offer answers.

In the interview with CNA and journalist Esra Aigin to be also published in the Turkish Cypriot daily  Yeniduzen, Kati Piri expressed disappointment over the fact that the EU did not make the most all the tools available to it so as to encourage Turkey to remain on its European accession course, even when the domestic situation in country further deteriorated, making special reference to the opening of negotiation chapters and the economy.

She reminded that the European Parliament has called for the suspension of the negotiation process in 2016 after the arrest of ten journalists and nine parliamentarians. After that, the European Council took over, she added. The EP has also set its own red lines regarding Turkey’s accession course. They have to do with making progress on the human rights situation and not ratifying the new Constitution as it was drafted. However, Piri said, there was no progress on human rights whereas the new Constitution was implemented.

“If the most powerful law in the country, the basis, is undemocratic then you wouldn’t be credible to sit on the same table and discuss with this country. So, we called for a formal suspension of the negotiations. This doesn’t mean that Turkey is not a candidate country. She will remain a candidate country but we will not talk with them unless we see progress”, she noted.

Kati Piri has been the Rapporteur on Turkey’s EU progress in the European Parliament since 2014. Due to the suspension of negotiations with Turkey she expressed the opinion that the EP will deliberate on whether to appoint again a rapporteur or how to follow developments in Turkey in its new composition after the elections.

Αsked whether the one should talk about Turkey`s EU accession of Turkey or something else and replied that Turkey was never been so far away from accession as she is today. “I don’t want to exclude it (the accession). It wouldn’t be fair to Turkey’s citizens to exclude it, they did not change, it’s the government who has this policy. But for sure it wont be this Turkey and for sure it won’t be this European Union.”

Piri said that when in 2005 Turkey was ready for the negotiations we should have opened the chapters but the procedure in place, with every member state having a veto on every chapter is not effective. First the process and at the end of it the veto, she added. She also said that they pay 700 million euros per year in the accession fund but there is no accession process.

Asked to comment on the developments in the Eastern Mediterranean related to the energy sector and how the  EU and EP can make their citizens in the region feel safe  vis-a-vis Turkey, Kati Piri said that a democratic Turkey with a stable economy is in the interest of EU citizens and that should be the basis on which European leaders should work on. “If Turkey goes further away she will be a much bigger threat. But I don’t see the European leaders coming up with such a strategy.”

EU should use all the tools, including economy, to speak out against Erdogan but not push him to the other side, she said, adding however “the EU is not dong this.”

“We are very short term, do not come up really with a strategy, we make statements, but this does not make Cypriots, Greeks and Bulgarians to feel more secure”, she pointed out. She explained that she is not against Greece and Cyprus but added that the EU should not use them as a strategy against Turkey.

Replying to another question Piri said that Tayyip Erdogan may be democratically elected but that does not necessarilly mean that he is a democratic person. The 50% of the electorate in Turkey which did not vote for him, will never do it,they wont ever do it, she said, adding that that gives her hope. “It is not a dictatorship which you do not know when it will end. Turkey has an open economy with no gas and oil and is the biggest investor in the EU. That’s why Erdogan needs the EU and its economy.”  She posed the question “Why we have never used that?”

Piri is also convinced that the Turkish President needs the EU. “He is a very popular president. If he didn’t want the EU why  hasn’t he come out openly and said: “I quit from the accession negotiations?”, she asked, replying at the same time that it is because he knows that he will be given a hard time by his own voters.

The MEP was also asked whether when she drafted her reports she was aware of the situation and the policy of Turkey in the Turkish Cypriot community, Piri said that she had some contacts with representatives of the community. She also said that she had had contacts with both communities during island when she came to Cyprus in 2016. She also expressed the opinion that the arrests about suspects for Gulen’s organisation or attacks against the Turkish Cypriot press should be discussed in the Committee of Civil Liberties because it is an internal problem of EU since the whole of Cyprus territory is a member state.

About the upcoming Euroelections in May, Kati Piri believes that the turn out should be high, hoping that the eurosceptical members wont be so many.  She said that the citizens do not care about the institutions of Europe but they want to see solutions to their problems. People are concerning about the refugee crisis, the climate change, she added expressing hope for the future when she sees young people protesting for the environment.

“Citizens want to see leaders who deliver. It is hard for Europe to produce and deliver”. In order for this to happen, a clear mandate its needed from the people to the leaders and it is the time for them to deliver, Kati Piri concluded.