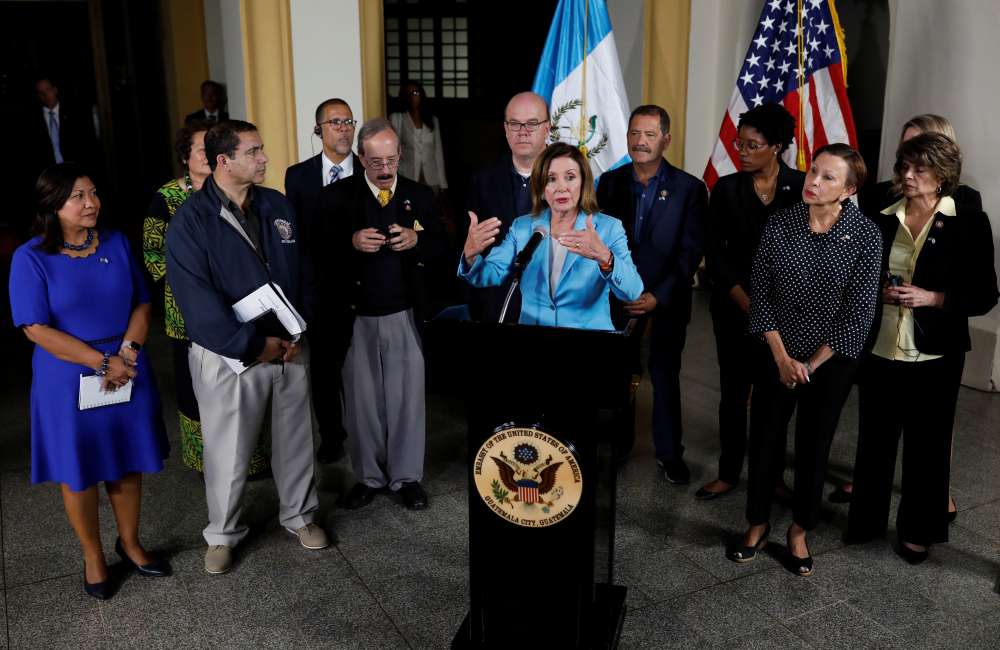 House of Representatives Speaker Nancy Pelosi criticized U.S. treatment of migrants during a visit to Guatemala, and raised doubts about whether the Central American country could cope with a migration deal agreed with the Trump administration.

Pelosi, a Democrat, was visiting Central America on Thursday with a bipartisan congressional delegation just as the region was coming under pressure from U.S. President Donald Trump to do more to stop migrants reaching the United States.

Under the threat of economic sanctions, Guatemala late last month struck a deal with Trump to make the country a so-called “safe third country.” The accord will require migrants to seek asylum in Guatemala rather than in the United States.

Critics question whether Guatemala, which suffers from high levels of poverty and violence, has the resources to handle a potential surge in asylum applications.

Asked whether Guatemala would be able to handle the agreement, Pelosi told a news conference she wanted to know more about what the safe third country deal entailed, and described it as a “very difficult challenge.”

Pelosi and the congressional delegation will also travel to El Salvador and Honduras, after which they are scheduled to visit U.S. detention centers in McAllen, Texas.

Democrats have said Trump’s policies have sparked a humanitarian crisis at border facilities, and Pelosi said that “from what we have seen in past visits, the treatment of people there is a challenge to the conscience of America.”

“It’s really shameful what has happened on the border,” added Pelosi, who was meeting with representatives from the judiciary, civil society and rights groups in Guatemala.

U.S. Acting Homeland Security Secretary Kevin McAleenan said this month that the United States wants similar agreements with Honduras and El Salvador. His office said on Thursday the number of migrants apprehended or deemed inadmissible on the U.S. border with Mexico fell 21% to 82,049 in July from June.

“The situation is improving by every available metric, but, I want to be very clear, that we remain at and beyond crisis levels in illegal crossings,” McAleenan said in a statement.

According to Customs and Border Protection data, law enforcement actions against Guatemalan migrants fell by 41%, against Salvadorans by 21% and against Hondurans by 16% in July.

Under the safe third country deal, Guatemala says it will only accept migrants from neighboring Honduras and El Salvador.

“My personal position is that Guatemala is in no way capable of being a (safe) third country,” she said alongside Pelosi.

Immigration, one of Trump’s signature issues in the 2016 presidential campaign, is already shaping up as a central issue in the November 2020 election. Democrats have sharply criticized Trump’s policies aimed at banning nearly all asylum-seekers from entry, warehousing detainees in crowded quarters and holding children separately from the adults they traveled with.