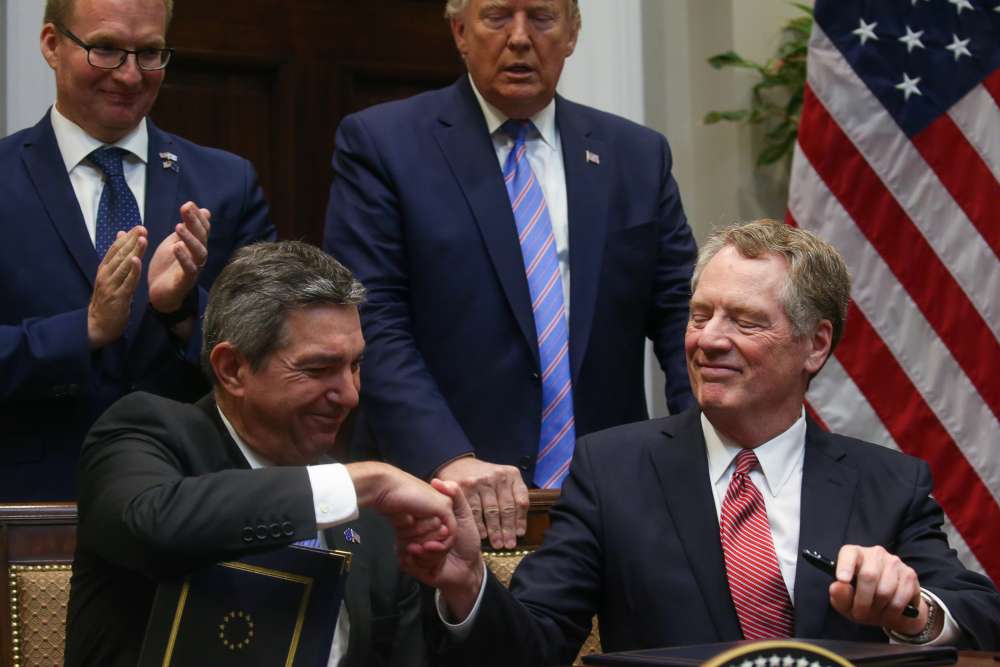 U.S. President Donald Trump announced a deal on Friday to sell more American beef to Europe, a modest win for an administration that remains mired in a trade war with China, but he said tariffs on European auto exports remain a possibility.

The European Commission has stressed that any beef deal will not increase overall beef imports and that all the beef coming in would be hormone-free, in line with EU food safety rules. The deal needs European Parliament approval.

“The agreement that we sign today will lower trade barriers in Europe and expand access for American farmers and ranchers,” Trump said at a gathering of European Union officials and cowboy-hatted American ranchers in the White House Roosevelt Room for the announcement.

The agreement was then signed by U.S. Trade Representative Robert Lighthizer, Stavros Lambrinidis, the European Union’s ambassador to the United States and EU representative Jani Raappana.

Trump joked that his administration was working with the EU “on a 25% tariff on all Mercedes-Benz and BMWs coming into our nation.”

“So, we appreciate – I’m only kidding,” he said to laughter.

But talking to reporters later, he said imposing the tariffs on European autos remained a possibility.

“Auto tariffs are never off the table,” Trump said. “If I don’t get what I want, I’ll have no choice but maybe to do that. But so far they’ve been very good.”

The beef deal could help alleviate some of the damage to the domestic agricultural industry because of tariffs Beijing has imposed on U.S products in retaliation for U.S. levies on China.

Trump said in the first year duty-free U.S. beef exports to the EU will increase by 46% and over seven years will rise 90% further. “In total the duty-free exports will rise from $150 million to $420 million, an increase of over 180%,” he said.

Without mentioning China by name, Lambrinidis said the United States and Europe could work together to stand against countries that did not compete fairly in the global market.

“The agreement shows us that as partners we can solve problems,” he said.

EU sources and diplomats in June said a deal had been reached to allow the United States a guaranteed share of a 45,000 tonne European Union quota.

“Our ability to participate in trade with the EU over the years has been challenged by limitations,” Tyson said. “This agreement provides the opportunity for a more consistent flow of high quality beef product to meet customer and consumer demands.”

The U.S. beef industry believes spotty access to the market is a reason why more American farmers do not raise their cattle without hormones, which speed up growth. The EU bans beef from cattle treated with synthetic growth hormones.

“The biggest problem with the European market has been the uncertainty,” said Kent Bacus, director of international trade for the National Cattlemen’s Beef Association, an industry group.

Friday’s announcement coincides with Trump ratcheting up Washington’s trade dispute with China. On Thursday, he said he would impose a 10% tariff on $300 billion of Chinese imports from Sept. 1 and threatened to raise tariffs further if Chinese President Xi Jinping failed to move faster on striking a trade deal.

The dispute between the world’s two top economies has hurt world growth, including in Europe, as it enters its second year.

U.S. and European officials have sought to lay the groundwork for talks on their own trade agreement but have been stymied over an impasse on agriculture.

The agreement on beef could, however, ease tensions between the two sides, which are each other’s largest trading partners.

The Trump administration has been pursuing a host of new trade deals with Europe, China and others as part of the Republican president’s “America First” agenda as he seeks a second term in office, but difficulties in securing final pacts have roiled financial markets.

European stocks on Friday were battered by Trump’s latest salvo against China and Wall Street also took a hit.