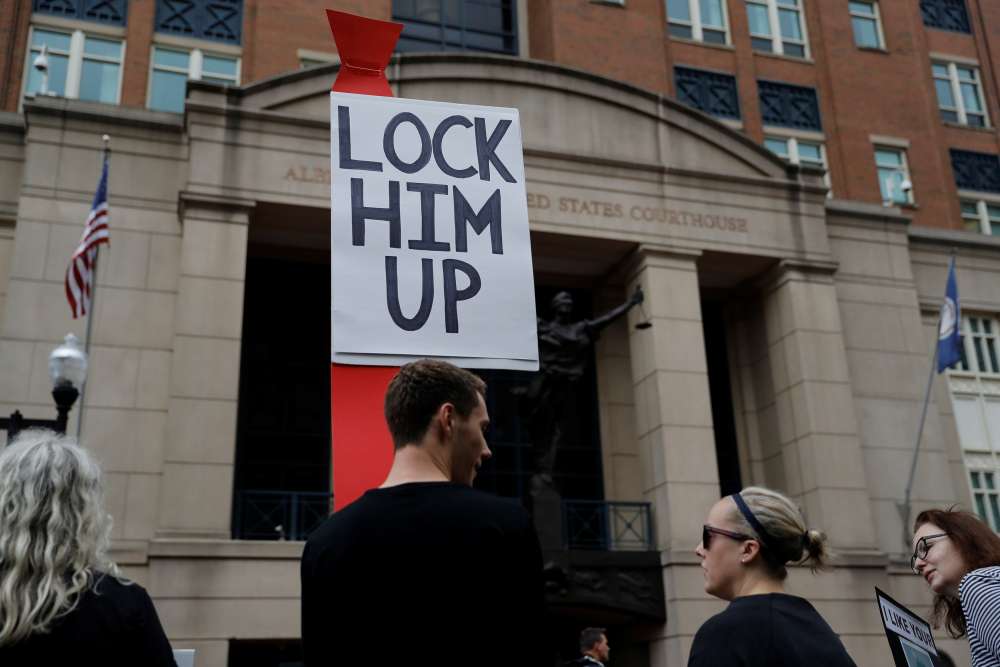 Two witnesses in the trial of President Donald Trump’s former campaign chairman Paul Manafort testified on Wednesday that invoices purporting to bill a company tied to Manafort appeared to be fake.

It was the first time that prosecutors from Special Counsel Robert Mueller’s office disclosed the invoices, which contained spelling and address errors, missing information and in one case, contained information about services that were never rendered.

It is unclear who created the invoices or how they were used. Prosecutors have charged Manafort, 69, with tax fraud, bank fraud and failing to report foreign bank accounts. He has pleaded not guilty to all charges.

Eight witnesses testified during the second day of Manafort’s federal court trial in Alexandria, Virginia, the first stemming from Mueller’s 14-month investigation of Russia’s role in the 2016 U.S. election.

The details of the trial were largely overshadowed by Trump’s call on Wednesday for an end to Mueller’s probe, leading some Democrats to repeat accusations that the president is obstructing of justice.

Many of the witnesses work for vendors who over the years provided luxury goods and services to the Manafort family, including designer suits, Land Rovers and home improvements.

All said they were paid by Manafort through international wire transfers, a method of payment they agreed was unusual.

At the center of Manafort’s trial is whether he hid a significant portion of the approximately $60 million that prosecutors say he earned for the consulting work he did for the pro-Russia Ukrainian government.

Prosecutors have portrayed Manafort as a tax cheat who hid money in offshore accounts, and lied to borrow millions more against real estate in a bid to maintain an extravagant lifestyle once the work dried up.

None of the charges relate to the question of whether Russia and Trump’s campaign colluded during the 2016 presidential election. Both Trump and Russia have denied any collusion occurred. The president has repeatedly sought to discredit Mueller’s investigation, which he calls a witch hunt.

The prosecution said on Wednesday it was moving ahead of schedule and intended to rest its case sometime next week.

Between 2010 and 2014, Jacobsen confirmed he billed Manafort more than $3 million for projects from kitchen renovations to the construction of a pool house.

Prosecutors then displayed a copy of an invoice on the screen that was different from the others Jacobsen had sent Manafort over the years.

It contained an imprint of his company’s logo but billed for architectural services and listed as the client a company called Global Endeavor, which court records say is tied to Manafort.

“That is not a bill from my company,” he testified, adding that Global Endeavor was never a client nor did his firm provide architectural services.

Katzman provided similar testimony about two invoices he was shown by prosecutors that contained small mistakes in the spelling of Alan Couture’s name and address.

“There are errors again with our company name and zip code,” he said.

Throughout the day, prosecutors repeatedly clashed with U.S. District Judge T.S. Ellis about the kinds of evidence they sought to introduce.

On multiple occasions, Ellis chastised the government for trying to display evidence of Manafort’s wealth.

Examples prosecutors have cited include a $15,000 jacket made from an ostrich, a $21,000 Bijan watch and a $1.9 million wire transfer to buy his daughter a home in Arlington, Virginia.

“Mr. Manafort is not on trial for having a lavish lifestyle,” Ellis said.

Out of the jury’s earshot, he also criticized both sides for using the word “oligarch,” saying it had negative connotations and could give jurors the impression Manafort was “consorting and being paid by people who are criminals.”

“Of course, there will be no evidence about that,” the judge said, adding that oligarchs were merely rich people.

Prosecutors said on Wednesday they planned to wrap up with testimony from two more vendors on Thursday before calling people who worked as bookkeepers and accountants for Manafort.

One big question is the role Manafort’s former business partner Rick Gates will play in the trial.

Gates, who pleaded guilty to making false statements after being indicted by Mueller, has been expected to be a star government witness.

But prosecutor Uzo Asonye caused a stir on Wednesday, after Ellis asked him about Gates taking the stand.

“He may testify in this case, he may not,” Asonye said.

When the judge asked him for a clarification, Asonye said prosecutors constantly evaluated the need to call a particular witness and his comments were “not to suggest we are not calling him.”