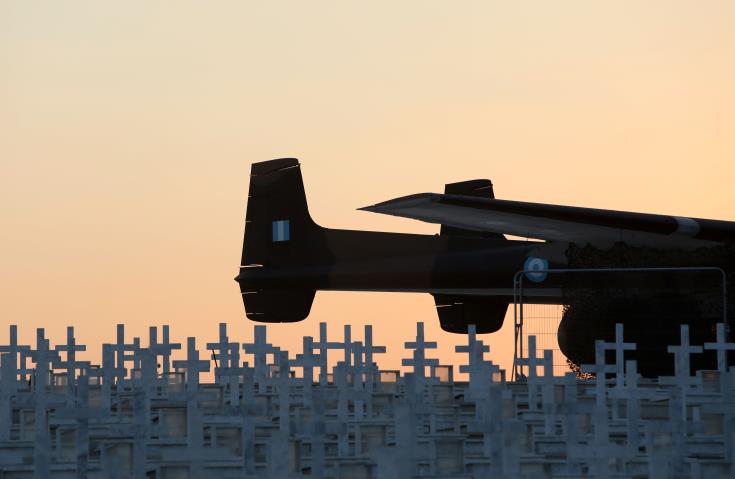 An aircraft, similar to Noratlas transport plane which was shot down by friendly fire during the 1974 Turkish invasion, was unveiled on Friday by Cyprus President Nicos Anastasiades, in a sombre ceremony to mark the 44th anniversary of Turkey’s offensive against Cyprus.

The unveiling ceremony, at the site of the crash, has been described as a small token of appreciation and respect for the Greek commandos and crew of the Noratlas, killed during operation NIKI 4, in the early hours of Monday, July 22, 1974.

Today the state honours the 28 Greek commandos and four crew members who were dispatched to Cyprus at a most critical time to help as the Turkish invasion was unfolding. All, except one, were killed in the line of duty.

Items that were unearthed from the site of Makedonitissa Tombs, where the plane crashed, will be on display.

Greece was represented at today’s ceremony by National Defence Minister Panos Kamenos, Georgios Varemenos, Second Deputy Speaker of the Greek Parliament, as well as representatives of Greek fighters’ associations and relatives of the crew on board the fatal flight to Nicosia.

Noratlas, along with other Greek transport planes, set off in an operation code named “Victory”, to transport a battalion of Greek commandos from Souda, Crete, to Nicosia, to help in the heavy fighting that took place at Nicosia International Airport. Greek aircraft however, were caught in friendly fire, which resulted in the loss of 31 men and the destruction of three aircraft.

Sixteen of the commandos, whose bodies were located at the site of the crash, were buried in Lakatamia military cemetery, a Nicosia suburb. One commando, Thanasis Zafiriou, survived the crash. He died in September 2016. The remaining commandos and crew were found inside the Noratlas plane when it was recently unearthed. The remains of 13 of them were identified and returned to their families. Three commandos are still missing.