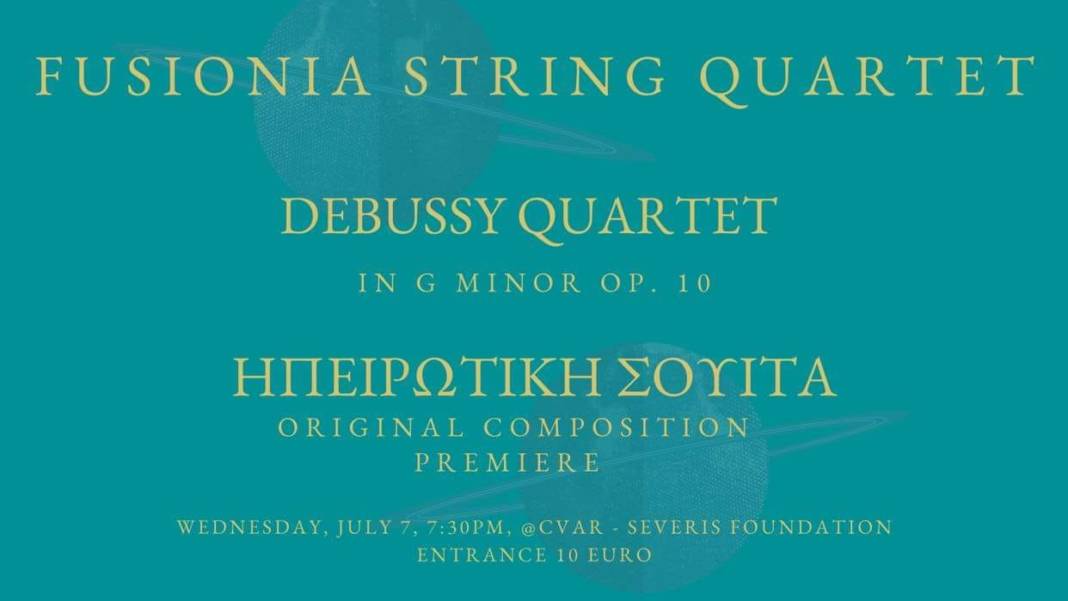 The Debussy String Quartet, from 1893, was a pivotal work—a turning point in classical music away from, and beyond, what came before. It is also the only known string quartet he ever composed.
The string quartet was premiered by the Ysaÿe Quartet at the Société Nationale. However, it received mixed reviews. Guy Ropartz, former student of Cesar Franck, noted the “Russian influence and some unusual sonorities,” while Willy, Colette’s husband and influential reporter on the Parisian musical scene, described the quartet as “baffling, yet full of originality and charm.” While Debussy had initially planned to dedicate the work to Ernest Chausson, it is clear from Debussy’s letter to Chausson that his colleague did not take a liking to the work.

Ηπειρώτικο suite was initially composed for Fusionia Duo for two violins in 2014 when the Duo was studying in Trinity Laban Conservatoire of Music and Dance. The idea was established in April 2021 in Cyprus for String Quartet.
The suite consists of an original composition, polyphonic song “Πέντε χρόνους σεργιανούσα”, improvisations in the style of “Μοιρολόι” as well as “Σκάρος” and the traditional tune “Χειμαριώτικο”.
When Wednesday, July 7 at 7.30pm
Where Ermou street, 285 1017 Nicosia
Location
Tickets: €10
Tickets at the entrance, for booking in advance call 99829127
By Lisa Liberti
Previous article
Creative biology by the CYENS – Thinker Maker Space
Next article
Cabinet to announce measures for fires, discuss COVID cases