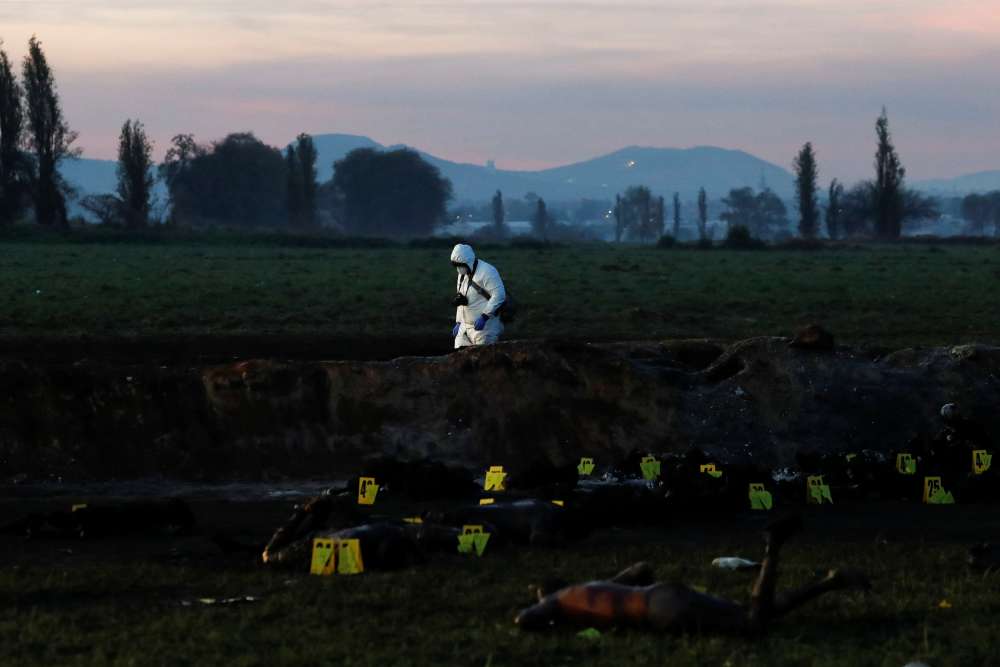 At least 66 people were killed after a pipeline ruptured by suspected fuel thieves exploded in Mexico, authorities said on Saturday, as President Andres Manuel Lopez Obrador defended the army despite its failure to clear the site before the blast.

Dozens of burned bodies lay in the charred field where the blast occurred on Friday evening by the town of Tlahuelilpan in the central state of Hidalgo in what was one of the worst incidents to hit Mexico’s troubled oil infrastructure in years.

Forensic experts inspected and photographed the remains while soldiers and other military personnel guarded the cordoned-off area that was littered with half-burned shoes, clothes and containers used by people to collect fuel.

At a news conference with Lopez Obrador, Hidalgo State Governor Omar Fayad said 66 people were killed and 76 people injured in Friday evening’s explosion, which happened as local residents tried to fill buckets and drums with fuel.

Video on social media of people filling buckets from the pipeline during daylight hours in the presence of the armed forces. But Lopez Obrador, who vowed to continue the crackdown on fuel theft, defended the army against questions about why soldiers failed to prevent the tragedy.

“We’re not going to fight fire with fire,” he said. “We think that people are good, honest, and if we’ve reached these extremes … it’s because they were abandoned.”

Backing comments made earlier by his minister for public security, Lopez Obrador said the army had been right to avoid a confrontation due to the number of people seeking to benefit from free fuel at the pipeline site.

The priority, he said, was to eradicate the social problems and lack of opportunities that had prompted people to put their lives at risk to get at the fuel – a few liters of which are worth more than the daily minimum wage in Mexico.

Relatives of victims stood huddled together, some of them crying, after the massive blast. Much of the rush to siphon off fuel and the chaos of the explosion was captured on mobile phones and began quickly circulating on social media.

“I came looking for him when the fire was still going,” he said. “But we had stay on this side we couldn’t get to here. Because of the heat of the blaze and the soldiers wouldn’t let us. His friends confirmed that he was around here.”

Mexico’s top federal prosecutor Alejandro Gertz said the pipeline was tapped deliberately, but that the investigation was complicated because everyone right at the blast site died.

Soon after the government said Friday’s blaze had been put out, TV footage showed tense exchanges between authorities guarding the site and residents over the death toll.

Lopez Obrador says his decision to shut down pipelines to combat crime has greatly reduced theft. However, it sparked fears for the economy, as well as triggering fuel shortfalls in central Mexico, including Hidalgo.