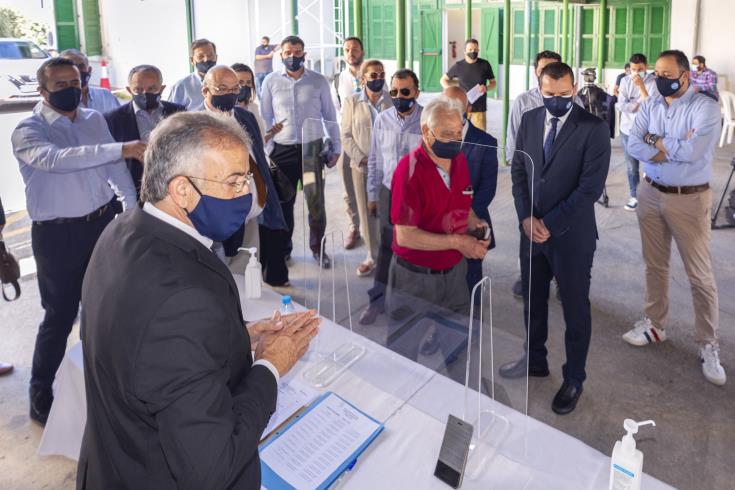 With only a fortnight away from the Parliamentary elections, political parties focus their campaign on Friday on the indefinite strike action of teachers working in state afternoon and evening schools, on concerns over the fighting in Israel, the Cyprus problem and the pandemic.

Democratic Rally leader Averof Neofytou criticised AKEL’s reaction for its name to be included in the ballots as it is, and said “it is unheard of, a party leader to protest, because his party will run in the elections under its own name».
Similarly, AKEL General Secretary said it was unheard of that the ruling party three weeks before the elections, prefers to use irony instead of pursuing political discussion on the problems the island is facing.

The Democratic Party criticised the government over its management of the Vaccination programme, while for the striking teachers it said that an unacceptable employment regime is being applied, which constitutes an abuse of power by the state.

Socialist EDEK repeated its position for an immediate resolution of the issue concerning the cash for passports programme.

The Citizens’ Alliance expressed grave concern over the fighting in Israel and urged the Security Council and the European Union to immediately intervene.

The solidarity Movement said it was concerned over the President’s intention to meet Turkish Cypriot Leader Ersin Tatar.

The Movement of Ecologists — Citizens` Cooperation, referring to the government proposal for utilisation of the EU Recovery Fund (one billion euros as sponsorship and another 200 million in the form of a loan) expressed the position that the utilization of the funds should be done only after the necessary reforms and with transparency.

The Democratic Front said the government should use all options to resolve the problem which the striking teachers are facing.

Meanwhile, the Chief Returning Officer announced that the service “Where to vote” has been activated.  Voters can enter their identity card number and date of birth and will be informed as to which polling station they will vote at.
The service is available at https://wtv.elections.moi.gov.cy/
Also in use is the Pancyprian number 77772212, where voters can provide the same information and be informed as to where they vote. This service is available from 8:00am until 18:00 during weekdays and on Saturday from 08:00am-13:00pm. An additional service is available where voters can send an sms from their mobile phone to 1199.

By gavriella
Previous article
Vaccination portal opens for people 50-54
Next article
Where to get a rapid test on Sunday 16, May