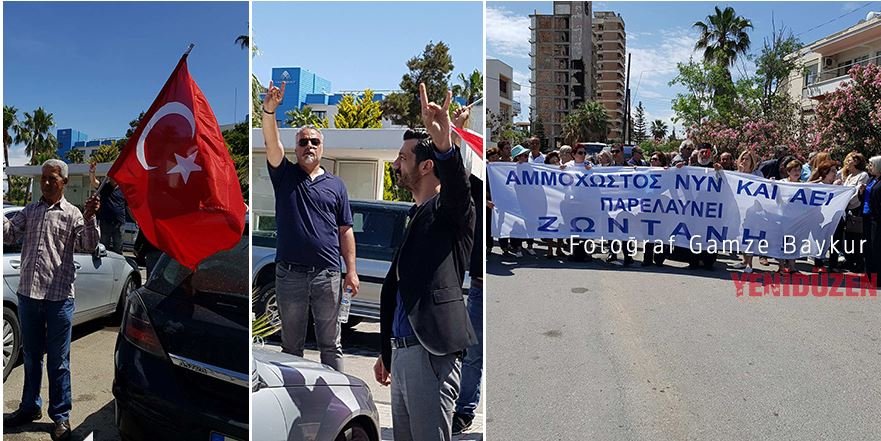 Nine people were detained briefly on Tuesday by the authorities of the illegal Turkish Cypriot regime, on a Famagusta beach, in the northern Turkish occupied part of Cyprus. The incident, involving 8 Greek Cypriots and one British national, occurred ahead of a visit by a European Parliament delegation to Famagusta beach, bordering the fenced off part of the town. Greek Cypriots had gathered in the area holding banners as MEPs were due to arrive there. People from the Turkish occupied areas of Cyprus had also gathered there holding Turkish flags and “flags” of the illegal regime.

All nine of them were released, once the illegal authorities had deleted from their mobile phones and their cameras photographs taken in an area the regime describes as “military zone.”

The delegation’s mission takes place in the context of the follow-up to petition 733/2004, 10 years after the Committee’s previous fact-finding visit to the island on 25-28 November 2007. The petition was submitted by Loizos Afxentiou on behalf of the Famagusta Refugee Movement.

Greek Cypriots who had gathered in front of Constantia Hotel on the Famagusta beach known as “Glossa”, awaiting the arrival of the MEPs, were holding banners saying Famagusta was always alive.

Mayor of Famagusta Alexis Galanos and four Greek Cypriot MPs were also there.

The occupation authorities had “arrested” nine people – eight Greek Cypriots and one British citizen – at Glossa beach and held them for about 15 minutes, on the pretext that they had entered a military zone. Their cameras and mobile telephones were checked and various photographs were deleted. They were then asked to leave.

Those nine persons then joined the other Greek Cypriots demonstrating outside Constantia Hotel.

On Tuesday morning, the MEPs met with the UN Secretary General’s Special Representative in Cyprus Elizabeth Spehar. On Monday evening they met with Cyprus’ Minister of Foreign Affairs Nikos Christodoulides.

Cyprus, which joined the EU in 2004, has been divided since 1974, when Turkey invade and occupied its northern third.

Varosha, the fenced-off part of the once thriving holiday resort, on the eastern coast of Cyprus, has been sealed since the 1974 Turkish invasion and, according to the UN, the Turkish military is responsible for it. Repeated attempts to hand the area to UN administration and its Greek Cypriot lawful inhabitants have so far failed due to the stance of the Turkish army.

By In Cyprus
Previous articleCyprus and Greece compete in Eurovision song contest semi final in Lisbon, Portugal
Next articleKathikas village