If you’re afraid of heights and going to the World Cup, don’t sit here 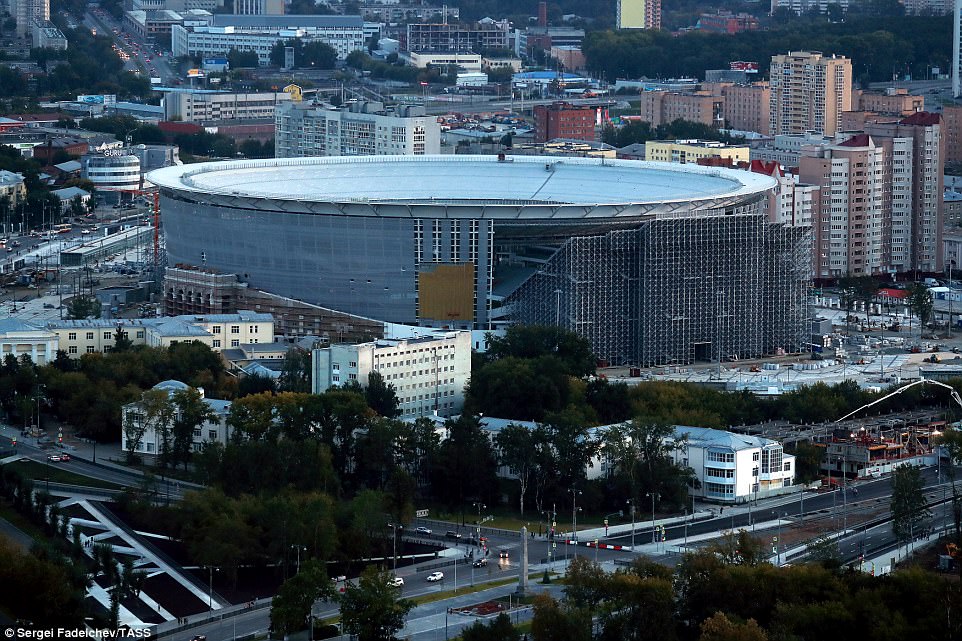 Droplets of rain gathered on the dark blue suit jacket of Leonid Rapoport, the sports minister of the Sverdlovsk region, as he stood in the auxiliary seating stands at Tsentralnyi Stadium amid a light drizzle Wednesday afternoon. “Fans do not care if there is a roof or not,” he said in Russian, and smiled.

World Cup tickets are notoriously hard to come by, but even people lucky enough to secure seats at a game could find themselves, in some sense, on the outside looking in.

In the run-up to the tournament, architects here were tasked with temporarily increasing the seating capacity of the arena, originally built in 1957, while keeping its historical walls intact. The eventual solution represented a bit of outside-the-bowl thinking: the construction of two additional stands that protrude from openings on either end of the stadium, uncovered by the roof, like enormous drawers pulled from a cabinet.

The unusual design has evoked a range of reactions well before the opening match. Critics called it an eyesore, a slapdash solution bordering on the absurd. Defenders hailed it as a paragon of practicality and preservation and the sort of sensible, sustainable construction too rarely seen at major international sporting events. Fans and soccer officials alike, meanwhile, just wanted to know whether the stands would be safe, leaving Rapoport and others to assuage their fears.

“Of course I saw all the reactions,” said Oleg Gak, the chief architect on the project, who good-naturedly defended his team’s design in an interview before the tournament. “But I want to say, when we finish any large project, there are always people who like or dislike the new building, especially when you look only at a picture.”

The ridicule bubbled up last fall when photographs of the construction site first began to circulate internationally, inspiring a stream of news articles and many an incredulous emoji on Twitter. Wide aerial shots of the temporary seats, in particular, made them look like steep stairways ascending to outer space, comically distant from the field. An unsparing headline from the sports website Deadspin, “Look at This Big Dumb World Cup Stadium,” seemed to capture the general tenor of responses online.

“We got a lot of emails at the time about how stupid the stadium is,” said Michal Karas, the editor-in-chief of StadiumDB, a website that covers arena construction worldwide.

But, in interviews, Karas and others singled out the stadium for praise amid concerns that other World Cup stadiums in Russia would become white elephants after the monthlong competition.

William Craft Brumfield, a historian of Russian architecture at Tulane University, called the redesign “obviously very curious,” but otherwise commended the local government and architects for maintaining the spirit of the site, which has been used as a playing field since around 1900.

“They see it as sort of a hallowed ground,” Brumfield said of residents here in Yekaterinburg, a historically industrial city in the Ural Mountains region.

The stadium was first opened in 1957, and its historical facade — adorned with semicolumns, bas-reliefs, sculptures and stucco details in the Stalinist, neoclassical style — was eventually given protected landmark status, surviving multiple renovations.

Instructed to expand the arena’s capacity to 35,000 while preserving the old lower facade as a base, Gak and his team at Project Institute Arena, a Moscow-based architecture firm, devised a plan to essentially plop a new stadium inside the existing walls and add stands that could be removed after the tournament. The stadium, once reduced to 23,000 seats, would be used by the local team, FC Ural. The project cost 12.5 billion rubles ($200 million), Rapoport said.

Elizaveta Likhacheva, director of the Shchusev State Museum of Architecture in Moscow, favorably compared this hybrid approach of melding new into old to “inserting a glass into a podstakannik” — a traditional Russian decorative teacup holder. Though she, too, was lukewarm about the stadium’s aesthetics, she said the negative hubbub around the arena revealed a deeper impulse in some from the West to mock all things Russian.

Fans with a fear of heights may ultimately beg to differ. The temporary seats perch steeply upon a dense latticework of steel beams. Each auxiliary stand is 139 feet tall, and spectators will be positioned right up to their outer edges. Those on the uppermost rows could feel like they are peering off the roof of a 14-story building.

From there, spectators view the action through a wide rectangular opening in the side of the stadium — with the roof partially obstructing their view of the other seating areas — like pedestrians catching a game from the sidewalk outside a sports bar.

“If you really come to the stadium, up to the temporary stands, then you will see not only a cool view of the pitch, but also a wonderful view of the city,” Gak laughed.
Andrew Keh © 2018 New York Times News Service

By In Cyprus
Previous articleEmployment in the public sector up 1.84% in Q1 2018
Next article72 year old arrested in connection with two Limassol fires