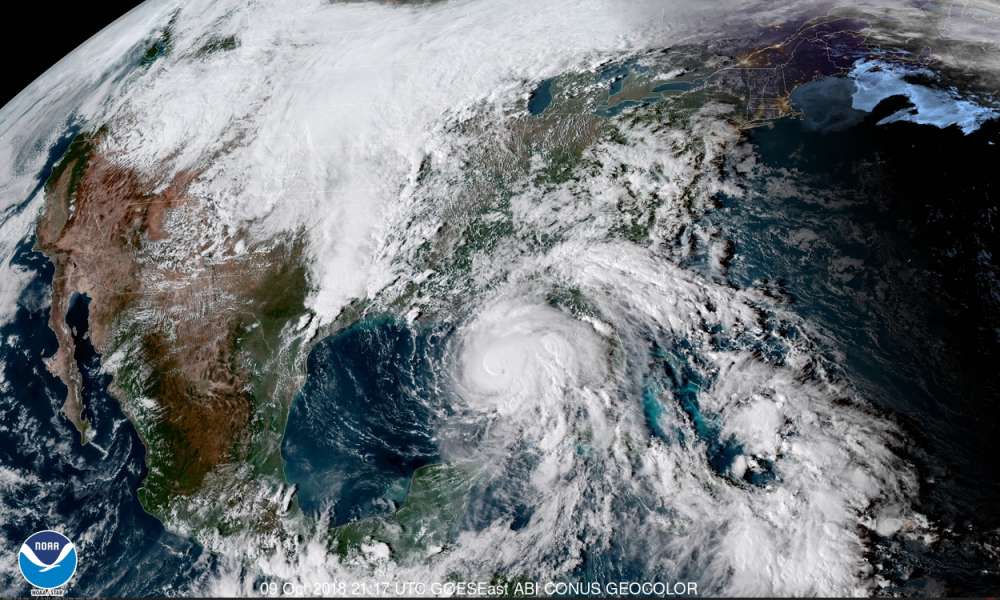 Hurricane Michael howled closer to Florida’s Gulf shore on Tuesday as a major Category 3 storm, as half a million coastal residents were urged to seek higher ground on the eve of a landfall forecast to bring towering waves and roof-shredding winds.

Michael is projected to plow into Florida’s Panhandle at midday on Wednesday, unleashing potentially devastating waves as high as 4 metres that could rush inland for miles around the storm’s centre, the National Hurricane Center (NHC) warned.

President Donald Trump declared a state of emergency for the entire state of Florida, freeing up federal assistance to supplement state and local disaster responses.

The last NHC report said the storm was about 325 km from shore and packing sustained winds of up to 205 km per hour, after jumping from a Category 2 to Category 3 on the five-step Saffir-Simpson wind scale.

Winds of that magnitude can inflict substantial damage to roofs and walls of even well-constructed homes, according to the National Weather Service. Forecasters said the storm could also spawn tornadoes over parts of Florida and Georgia.

NHC Director Ken Graham said Michael represented a “textbook case” of a hurricane system growing stronger as it drew near shore, in contrast to Hurricane Florence, which struck North Carolina last month after weakening in a slow, halting approach.

Forecasts Tuesday night called for Michael to further intensify into a Category 4 storm, defined as a hurricane with winds of at least 209 kph, before making landfall.

The storm is likely to dump prodigious amounts of rain over Florida, Alabama and Georgia, as well as the Carolinas – still reeling from post-Florence flooding – and into Virginia. Up to 30 cm of rainfall is forecast for some areas.

“This is a storm that is going to be life-threatening in several ways,” said Bo Patterson, the mayor of Port St. Joe, Florida, whose small beachfront town lies directly in the storm’s projected path.

Florida Governor Rick Scott said Michael was expected to be “the most deadly, destructive storm to the Panhandle in decades.”

Byard said an estimated 500,000 people were under evacuation orders and advisories in Florida, where residents and tourists were fleeing low-lying areas in at least 20 counties stretching along 322 km of shore in the Panhandle and adjacent Big Bend region.

Among them was Betty Early, 75, a retiree who joined about 300 fellow evacuees huddled on makeshift bedrolls of blankets and collapsed cardboard boxes at an elementary school converted into an American Red Cross shelter in Panama City, near the storm’s expected landfall.

She was unsure how well her old, wood-framed apartment block would hold up. “I’m blessed to have a place to come,” she told Reuters. “My greatest concern is not having electricity, and living on a fixed income, losing my food.”

A hurricane warning was posted along more than 483 km of the coast from the Florida-Alabama border south to the Suwannee River.

“If you don’t follow warnings from officials this storm could kill you,” said Scott, a Republican running for the U.S. Senate in November’s congressional elections.

While the swiftly moving storm is not expected to linger over Florida for long, widespread heavy downpours will likely track inland to flood-stricken areas of the Carolinas even as rain-gorged rivers there begin to recede, National Weather Service meteorologist Ken Widelski told the conference call.

“The last thing we need is more water,” said Carolyn Causey, business manager of the Trinity United Methodist Church in Conway, South Carolina. Floodwaters from Florence destroyed two of the church’s buildings and gutted three others.

Some of the storm’s most significant early impact was to offshore energy production. U.S. producers in the Gulf cut oil production by about 40 percent and natural gas output by 28 percent on Tuesday, the Bureau of Safety and Environmental Enforcement said.

Georgia Governor Nathan Deal declared a state of emergency on Tuesday for 92 counties in his state.

About 2,500 National Guard troops were deployed to assist with evacuations and storm preparations, and more than 4,000 others were on standby. Some 17,000 utility restoration workers were also on call.

In Panhandle counties, most state offices, schools and universities were closed for the rest of the week. Lines at gasoline stations grew as people left. Those who stayed emptied grocery store shelves of water and other supplies.

The last major hurricane to hit the Panhandle was Hurricane Dennis in 2005, according to hurricane center data.

Torrential downpours and flash flooding from the storm over the weekend caused 13 deaths in Central America.