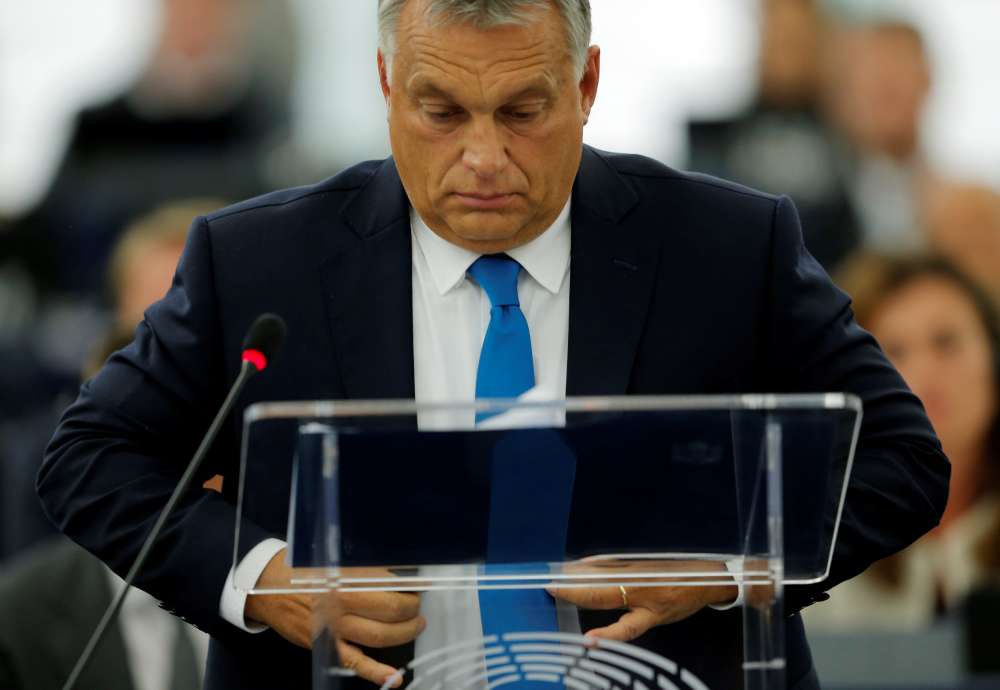 Hungarian Prime Minister Viktor Orban told the European Parliament on Tuesday he would not bow to EU “blackmail” as lawmakers prepared to vote on whether to punish Budapest for eroding democracy.

Some momentum might have been building against Orban during the evening ahead of the Wednesday vote. But it was still unclear whether the 751-strong European Parliament would be able to muster the two-thirds majority needed to pass the censure motion, which accusesHungary of breaching core EU values.

Since sweeping to power in 2010, Orban has pressured Hungary‘s courts, media and non-governmental groups, as well as refusing to take in asylum seekers arriving in Europe. Though the European Union has often protested, it has largely failed to stop what his critics decry as his growing authoritarianism.

If approved, the motion would go to the EU’s national leaders, theoretically opening the way for sanctions such as a suspension of Hungary‘s voting rights in the bloc.

But in practice that is sure to be blocked by Orban’s ally, the nationalist government in Poland that is locked in its own dispute with the EU over undercutting the rule of law.

Directly addressing EU lawmakers in Strasbourg, Orban cast Wednesday’s vote as an act of revenge for his refusal to host refugees who have fled to Europe from the Middle East and North Africa since 2015.

“Hungary shall not bow to blackmail,” said Orban, whose right-wing Fidesz party was re-elected with a landslide majority last April.

“Hungary shall continue to defend its borders, stop illegal immigration and defend its rights – against you, too, if necessary,” he said, drawing applause from the eurosceptic, far-right lawmakers in the assembly.

Orban has said the mostly Muslim refugees pose an existential threat to Europe’s Christian civilisation. He has also waged a vociferous campaign against Hungarian-born, Jewish American billionaire philanthropist George Soros and the liberal causes he backs in formerly-communist eastern Europe.

The motion against Orban’s Hungary goes well beyond the migration issue.

The deputy head of the European Commission, Frans Timmermans, said on Tuesday he shared its authors’ concerns about “fundamental rights, corruption, the treatment of Roma and the independence of the judiciary” in Hungary under Orban.

Former Belgian prime minister Guy Verhofstadt, a leading liberal, said Hungary would never have been allowed to join the EU in 2004 had it been back then as it has now become under Orban. The group of leftists and greens in the assembly said “Orban’s authoritarian moves must be curbed”.

Dutch lawmaker Sophie in ‘t Veld urged the EU to consider cutting generous subsidies toHungary, asking: “Why are we giving Mr Orban 87 million euros a week in order to destroy the European Union?”

“We believe that there can be no compromises on the rule of law and democracy,” Kurz told ORF television.

Greek members of the group were planning to do the same.

The parties of Kurz and Orban both belong to the biggest faction in the European Parliament, the conservative European People’s Party (EPP), which also includes lawmakers from the party of German Chancellor Angela Merkel.

The EPP membership has muted EU reaction to Orban’s policies over the years and the big question mark is what the group’s 217 members will now do.

The vote represents a particular challenge for EPP’s German head Manfred Weber since he announced his bid for the presidency of the EU’s executive Commission next year.

On Tuesday Weber said the EU might need to consider launching the sanctions procedure, under Article 7.1 of the bloc’s Lisbon Treaty, if Budapest did not address the criticisms.

The EPP decided on Tuesday evening that its lawmakers would vote freely without a unified stance from the whole group. Orban might have lost some key allies as EPP lawmakers said their caucus meeting showed many would vote in favour of Article 7.

But the vote was still hard to call.

To become the first-ever case of the European Parliament asking EU capitals to launch the punitive mechanism against one of their own, it must win the backing of at least 376 lawmakers and two thirds of the votes cast.