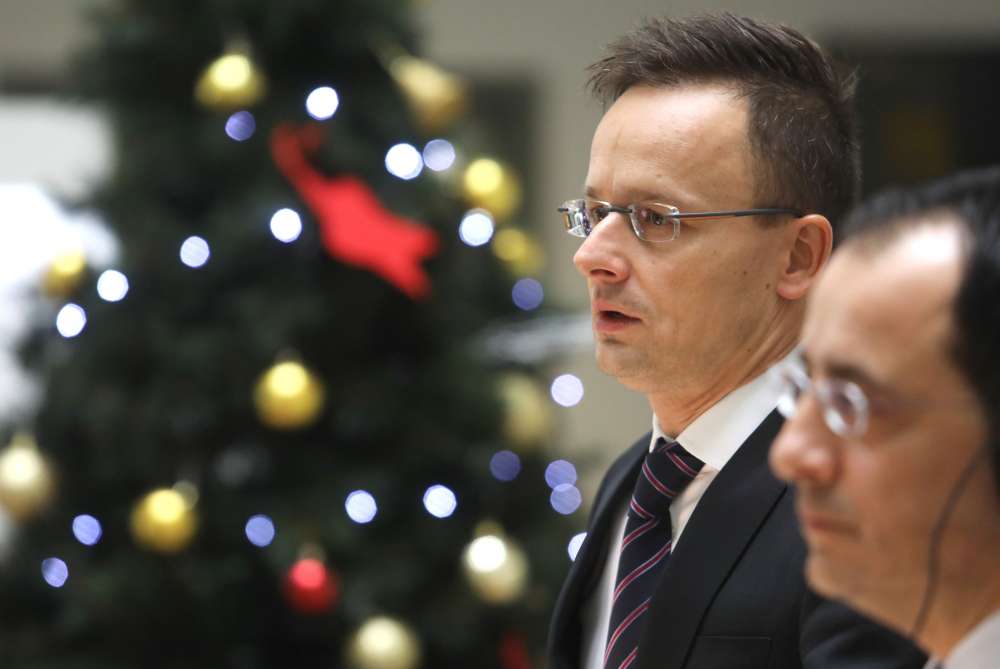 Hungary considers realistic the extraction and transfer of natural gas from Aphrodite gas field, Foreign Minister Peter Szijiarto said in Nicosia after talks on Friday with his Cypriot counterpart Nikos Christodoulides. The two Ministers signed a memorandum of understanding for cooperation in the energy field.

Speaking through an interpreter, Szijiarto said that Hungary considers Cyprus an ally while Christodoulides expressed hope that Cyprus’ energy programme which is underway and making significant progress, will give greater impetus to the memorandum signed.

The Hungarian minister said Cyprus and Hungary maintain common views on the future of Europe which should constitute of nations that are proud of their traditions, history and religions.

At the same time, he said, the two countries consider it important to step up the fight against terrorism, noting “it is our obligation to maintain the borders and safety of our citizens”.

He also said there are around 3000 Hungarian nationals  in Cyprus, while in the last year, tourism from Hungary to Cyprus surpassed every record, rising by 71% or 23,000. With Cyprus becoming a popular holiday destinations, he said, flights from Debrecen will commence and this is expected to increase the number of tourists visiting Cyprus.

Regarding the agreement signed, Szijiarto said that the country’s energy security is of critical significance. Hungary, he said, receives natural gas from Russia, but is constantly looking for alternative solutions.

“We want to alter the natural gas resources we have and we consider realistic the scenario of extracting and transferring national gas from Aphrodite field,” he added. The memorandum, he said, was signed to begin preparing for a situation where Cyprus’ natural gas will, in the medium term, play a role in refuelling central Europe.

Szijiarto said he acknowledges that water shortage poses a problem in Cyprus and his country can help with the use of special technologies in this field.  He also said he will have discussions with the Agriculture Minister on the issue.

In his remarks, Christodoulides said they reviewed bilateral relations and especially the European agenda, noting they must work with European partners to handle the challenges and find solutions at this critical time for Europe’s future.

He said the way issues such as Brexit, immigration, combating terrorism and securing the safety and prosperity of the people and the continent will be dealt with, “will determine whether and to what extent we can regain the trust of citizens and ensure the unity of the European Union and solidarity among its Member States,” he noted.

The Cypriot Minister said he informed Szijiarto on the latest developments on the Cyprus problem and the recent effort of the SG through his envoy Jane Holl Lute to resume negotiations where they were interrupted at Crans Montana. We repeated our commitment to positively contribute for the success of this effort.

Bilateral relations are on a satisfactory level, said Christodoulides, adding there is always room for improvement and further enhancing other fields such as commerce, investments and energy.

Today, an important step in this direction has been made, with the signing of the Memorandum of Understanding on Energy Cooperation, an area of ​​great importance for both countries and for the whole of Europe and beyond.

“I am convinced that the energy programme of the Republic of Cyprus, which is in full swing and is making significant progress, attaches greater value and to the Memorandum just signed,” he said.

By signing the Memorandum, he added, “we are creating a solid basis and a general framework for mutually beneficial cooperation in the energy field, covering major issues such as exploration and exploitation of energy resources, environmental standards, energy infrastructure , renewable energy resources, energy efficiency and coordination within the European Union…”He also described as a very positive development the opening of Hungary’s Embassy in Nicosia.