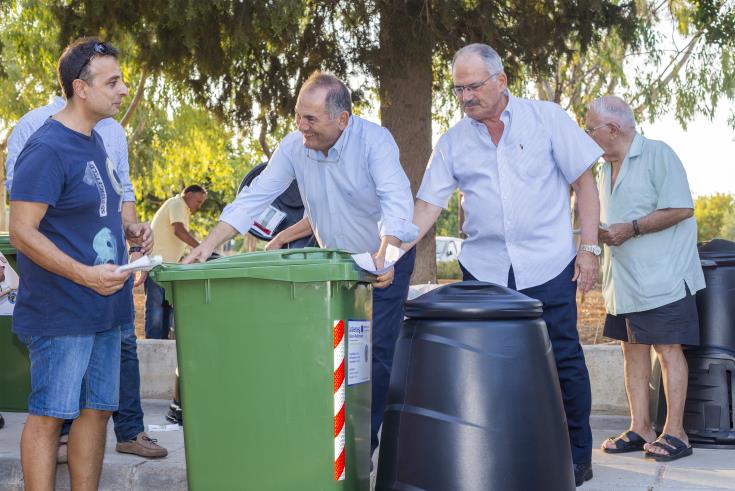 Households in Limassol’s Ekali area are being given special bins for mixed waste and waste composting as part of a Limassol Municipality pilot project aiming to increase recycling and reduce waste.

A total of 220 households have expressed an interest to participate in the project, which is part of the European programme titled “Stimulating Citizens Participation to recycle process though the implementation of benefit systems” of the cross-border programme Interreg – BalkanMed 2014-2020.

The first waste compost bins with a capacity of 220 litres and the 240-litre mixed waste bins, which carry special chips, were handed over during a ceremony in the presence of Limassol Mayor Nicos Nicolaides.

Nicolaides said that waste reduction has not only environmental but financial considerations, as the closure of the Vati landfill and the operation of the waste management plant in Pentakomo have led to higher waste management costs.

“There are two ways to reduce waste and these are recycling and composting of bio-waste, which are a very large proportion of waste in Cyprus,” he added.

Nicolaides told participants that with their participation they would help the rest of the city, as the aim was to evaluate the pilot programme and extend it, if possible, to the entire Limassol Municipality.

“We have weighed the waste produced by each household in the last six months and we will measure the volume again in the next six months, with special weighing systems fitted to a garbage truck in order to see the reduction,” he said.

The Mayor explained that the participants were given incentives, such as reduction in waste fees, free admission to municipal parking spaces and the city zoo for a certain period of time, creation / upgrading of parks in the area, free admission to various events organised by the Municipality and awards to the most efficient household.