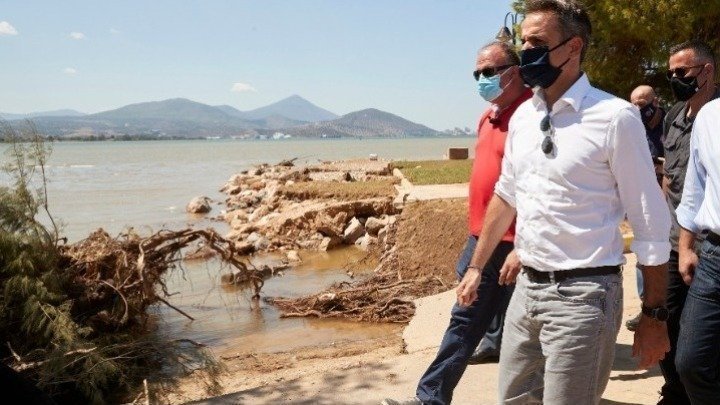 Prime Minister Kyriakos Mitsotakis promised the flood-stricken households and businesses of Karditsa that the government will stand at their side with “speed and determination”, in statements as he departed from Mouzaki, the municipality at the centre of the storm on Tuesday.

“We announced immediate measures and are monitoring all developments. I want the people of the region to know, the entrepreneurs, the farmers, that the government will stand at their side with speed and determination and do whatever is needed so that these people can stand on their feet again”, he said.

He promised swift compensation for farmers and financial support for businesses, especially those in the centre of Karditsa, to get them going again.

The prime minister had earlier announced the compensation, with “very fast procedures,” of those affected by the Medicane Ianos, during his visit to the city of Karditsa and his meeting with local bodies and organisations at the city hall.

“Those who have been affected will be compensated and it will be done with very fast procedures. I have absolute confidence in the ministry, but also in the President of ELGA (Greek Agricultural Insurance Organisation)”, he said.

After the meeting, the prime minister flew by helicopter over the areas affected by the adverse weather conditions and talked to residents, who have been experiencing great hardship in recent days.

“Have confidence in the capacity of the state machinery and in the state, which must stand by the citizens when they need it most”, Mitsotakis said while referring in detail to the first aid package for households and businesses.

“There is the first package of €5,000 and €8,000 for households and businesses, but we know that in many cases this will not be enough. But in order to be able to support entrepreneurs to get back on their feet we need to have a quick, accurate assessment of the real damage and we are here to support the city of Karditsa in particular”, he said.

He added: “I will show no tolerance for unjustified delays. People today are justifiably upset and angry, I fully understand that. We were faced with an unprecedented weather phenomenon.”

After the meeting, the prime minister walked through the main streets of the city and discussed with residents about the problems they are facing and listened to their requests.

He then visited Mouzaki to examine the restoration work underway in the affected area.

By In Cyprus
Previous articleWorkshop on forging synergies between industry and scientific research organised for Industry Week
Next articleFifteen new coronavirus cases detected out of 2,709 tests