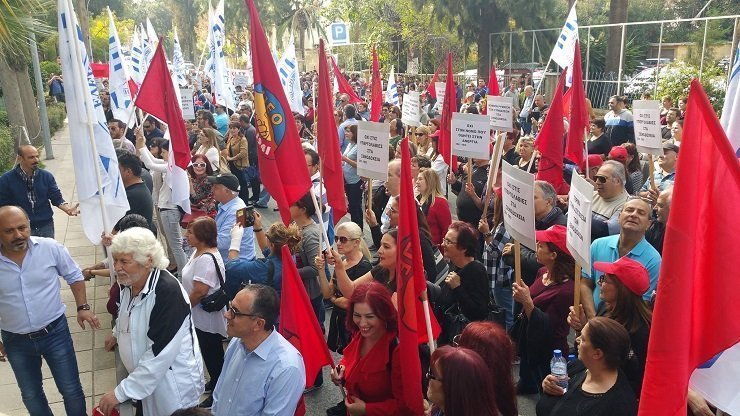 Hotel staff took to the streets on Tuesday to protest a proposed bill, which they say will remove existing employment protection provisions and pave the way for redundancies.

SEK and PEO trade union leaders said that the bill will deregulate the labour market, jeopardise many jobs as well as the forthcoming process of negotiating a new collective agreement in the hotel industry.

The leaders did not rule out taking strike measures if their request for the withdrawal of the bill is not met.

The protest march started outside the Ministry of Finance at 11 am.

Hundreds of hotel staff gathered, holding banners that read “legal guarantees for our contracts”, “no to the subcontracting law in hotels”, “you enrich hoteliers and throw workers on the street.” Police were present in the area.

The hotel industry is rapidly deregulating labour relations, collective agreements are not respected and to top all these, the Government comes up with a bill, which provides for further deregulation, said PEO General Secretary Pampis Kyritsis.

The bill entitles hoteliers to subcontract sections of their hotels and avoid complying with the regulations currently in force, which set their relations with their staff. “This will result in increased unregulated work and will create even greater problems for hotel staff,” Kyritsis noted.

According to the General Secretary of SEK, Andreas Matsas, the bill contains clauses that will contribute to further deregulation of the labour market and allow the employers side to promote the dismissal of hotel staff. “For example, the fact that hotel facilities can be subleased will promote the practice of subcontracting services and will disrupt labour peace.”

Matsas added that rate of undeclared work in hotels is over 20% and wages are below the average in Cyprus, indicating that employers already take advantage of staff in the industry.

According to the unions, the existing bill contains important protecting provisions for workers. “The proposed changes will remove provisions which ensure that every hotel is obliged to employ a sufficient number of staff, suitably trained in all specialties, to offer quality services and contains regulations for the conditions of employment of the staff. At the same time, a new provision is introduced which allows hoteliers to sublease hotel facilities, such as restaurants and bars to other legal entities,” Matsas said.

The unions request the withdrawal of the bill and the start of a dialogue with the involvement of all stakeholders. They stress that trade unions and hotel workers will not remain passive and will react with all means if their requests are not taken into account.

“The government must do something for the poor because they are violating our rights,” a hotel worker told journalists who were covering the protest.

“This is not about 100-200 people but it affects all citizens,” said another worker, who has been working for 27 years in the hotel industry.

A woman who has been working in a hotel for 16 years said she cannot live anymore on 800 euro. “Can they live with 800 euro? Let’s try it for at least a month.”

The protest concluded at the House of Representatives, where unions delivered a resolution to be forwarded to House President and the Parties.  The protesters expressed their dissatisfaction to House Deputy General Director, Eleni Eliadou that the bill was discussed in the Parliament without first consulting the trade unions.

They called for its withdrawal for the House President to intervene in order to start a dialogue with interested parties.Otherwise, the unions warned, they will react in other ways.

By In Cyprus
Previous articleCows with or without horns? Swiss to vote on Sunday
Next articleIndonesia: washed up dead whale found with 1,000 pieces of plastic in stomach (video)