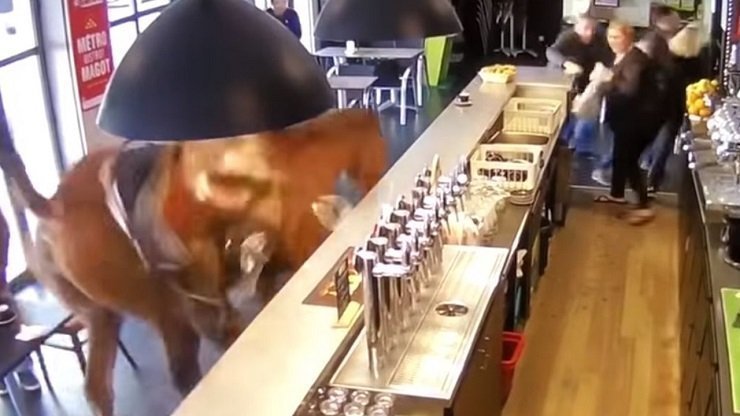 A horse ran into a bar and no, it’s not the beginning of a joke. A young racehorse in France managed to escape her handler last month and go on a little joy ride to a nearby watering hole.

The filly’s trainer Jean-Marie Beguignem told newspaper Ouest-France that he lost control of the animal as he led her from a stable to a racecourse in Chantilly, France, about 30 miles north of Paris.

Beguignem said the young horse has a fondness for running off.

Instead of choosing an open field, the horse headed into the nearest sports betting bar and terrified all of the patrons inside it.

“There was quite a panic. I still can’t quite believe it happened,” bar owner Stephane Jasmin told Reuters.

A video shows the spirited animal dashing in the bar as what appears to be a saddle slipped off her back.

As shown on the video, the horse ran to the back of the sports bar, then turned around to run the way she came in. She bucked her legs while knocking over tables and chairs.

Customers can be seen leaping behind the bar and fleeing the establishment to escape the horse.

The town of Chantilly is known for the historic “Château de Chantilly,” and the estate’s “Great Stables.” The stables were used to shoot scenes in the 1985 James Bond movie “A View to Kill,” according to Reuters.