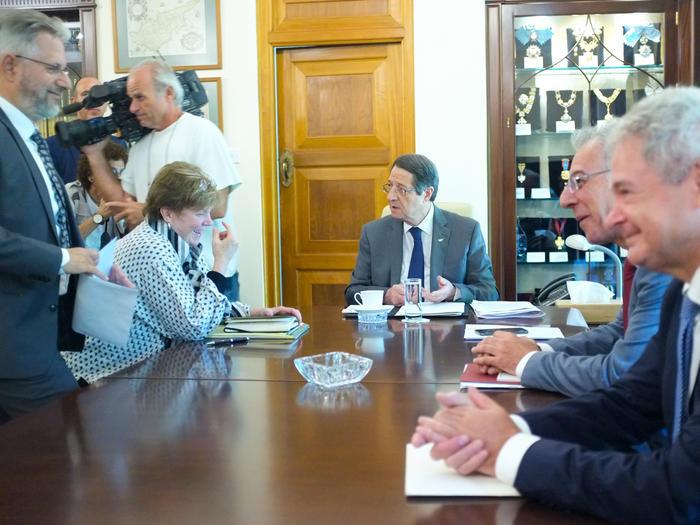 There is justified hope that the terms of reference that would pave the way for the resumption of UN-brokered Cyprus reunification talks could be agreed.

This is what government spokesman Prodromos Prodromou said on Monday after a meeting in Nicosia between President Nicos Anastasiades and visiting UN Secretary General’s special envoy Jane Holl Lute.

Prodromou who described the meeting as productive also said that after her meetings with the two leaders in divided Cyprus Lute will also hold talks with the other involved parties in the peace process – including Turkey.

“This is why we cannot ignore difficulties that may emerge if Turkey continues its ongoing illegal interventions and actions as regards the issue of (the ghost town) of Famagusta,” he also said.

“We hope and expect that everyone will follow the same positive path taken by the President of the Republic and Turkish Cypriot leader Mr. Mustafa Akinci during the recent meetings in Nicosia so as  prospects for the resumption of the negotiations are created,” he added.

Moreover, he said the President believes that based on what was discussed yesterday and today it is highly likely that a joint meeting of the two leaders with the UN Secretary General could take place later this month in New York.

Lute met Akinci late on Monday and is scheduled to leave the island on Tuesday with no other meeting on the agenda.