Hope remains for a Cyprus settlement, but it is not enough, Spehar tells Economist conference 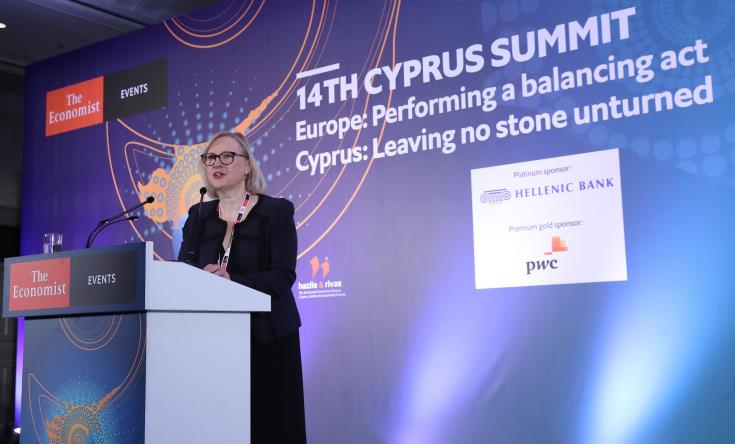 Hope remains for a Cyprus settlement, but that is not enough, said Special Representative of the UN Secretary-General in Cyprus and Head of Mission, Elizabeth Spehar, addressing the 14th Economist conference, taking place on Friday in Nicosia.

Spehar told the participants of the Conference that the period since then has been characterised by a deepened mistrust and a tendency to blame the others for the failure, but noted that the Secretary General of the United Nations concluded in his recent report that prospects for a comprehensive settlement remain alive, which should give everyone hope.

She also said that the meeting of the two leaders last Friday in which they discussed in a constructive attitude and the announcement that followed on the upcoming opening of the first two additional crossing points in ten years, has been an encouraging development.

“That offers some hope. It shows the willingness of the two leaders to meet and discuss for the good of their communities and demonstrate their ability to take decisive steps to improve the lives of Cypriots on both sides of the divide through concrete measures,” said the Special Representative.

“It’s my hope that the leaders can build on the momentum gained by the opening of the crossing points to push forward other long awaited and beneficial confidence building measures in the coming period,” she added.

Elizabeth Spehar noted in her address that the contacts of the Special Envoy of the Secretary General, Jane Holl Lute, “were fruitful”, adding that “the parties seem to share the view expressed by the SG that an unchanging status quo, that is the lack of the resolution of the Cyprus issue is truly not sustainable”.

She said that the Security Council’s commitment to the Cyprus issue also brings hope and stressed that the UN understands that the international community and, in particular, the guarantor powers, the United Kingdom, Greece and Turkey, must do their part to support this process and contribute positively to reaching a solution.

“At the same time, the UN, including the Secretary-General, has been quite clear that it is first and foremost up to the Cypriots, and especially the two leaders, to determine the future course of this process,” Spehar remarked.

She also stressed that a lot more would need to be done in a future process to prepare the two communities for a settlement, to explain the benefits of a solution, change mindsets and build a shared vision for the future. “Public outreach will be key to prepare both communities in a timely manner” she noted.

“It is also my own careful reflection that hope, in fact, remains. But at the same time, we must admit, hope is not enough. In recognising this, it is incumbent upon everyone who cares about this issue to do their part and to consider the ways in which they can contribute towards the settlement of the Cyprus issue. We, as the UN, stand ready to assist when the sides jointly decide to re-engage in meaningful, results-oriented negotiations to reach a lasting agreement within a clear horizon,” the Special Representative said.

The leaders of the island’s two communities, President Nicos Anastasiades and Turkish Cypriot leader Mustafa Akinci, announced that the Lefka/Aplici and Dherynia crossing points will open on November 12, in a joint statement released by the United Nations in Cyprus after their meeting on October 26.