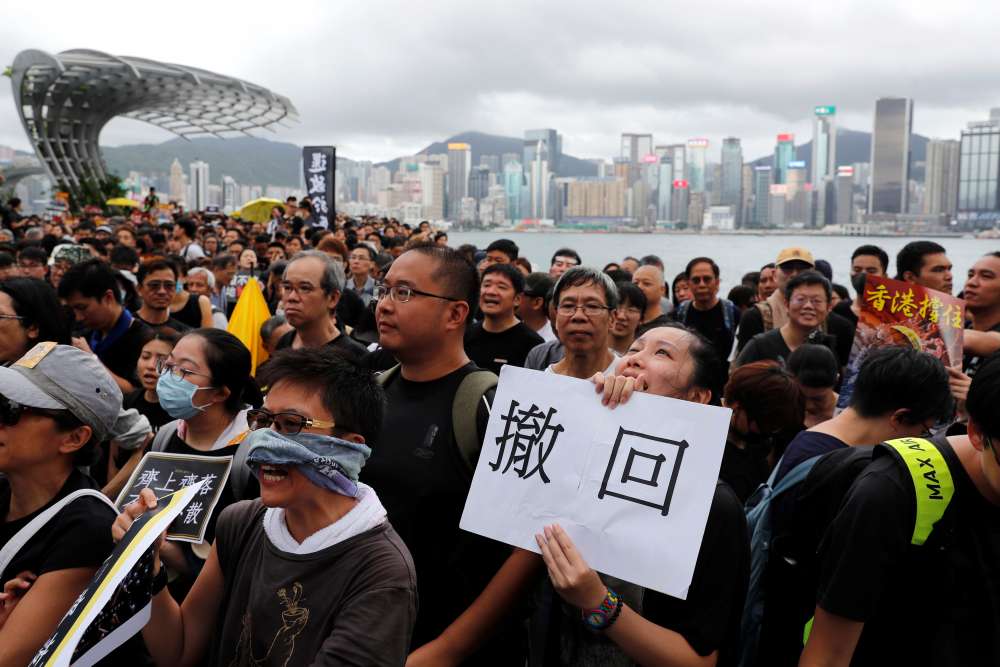 Hong Kong protesters clashed with police on Saturday in a town near the boundary with mainland China where thousands rallied against the presence of Chinese traders, seizing on another grievance following major unrest over an extradition bill.

The demonstration in the Hong Kong territorial town of Sheung Shui, not far from the Chinese city of Shenzhen, began peacefully but devolved into skirmishes and shouting. Protesters threw umbrellas and hardhats at police, who retaliated by swinging batons and firing pepper spray.

Later in the day Hong Kong police urged protesters to refrain from violence and leave the area.

The protest was the latest in a series that have roiled the former British colony for more than a month, giving rise to its worst political crisis since its 1997 handover to China.

Sometimes violent street protests have drawn in millions of people, with hundreds even storming the legislature on July 1 to oppose a now-suspended extradition bill that would have allowed criminal suspects in Hong Kong to be sent to China to face trial in courts under ruling Communist Party control.

Critics see the bill as a threat to Hong Kong’s rule of law. Chief Executive Carrie Lam this week said the bill was “dead” after having suspended it last month, but opponents vow to settle for nothing short of its formal withdrawal.

Protests against the bill had largely taken place in Hong Kong’s main business district, but demonstrators have recently begun to look elsewhere to widen support by taking up narrower, more domestic issues.

In Sheung Shui, protesters rallied to oppose small-time Chinese traders who make short trips into the territory to buy goods that they then haul back to China to sell.

The demonstrators chanted demands in Mandarin, China’s official language, for the Chinese traders to go home. Many street-level shops were shuttered during the march.

The traders have long been a source of anger among those in Hong Kong who say they have fuelled inflation, driven up property prices, dodged taxes and diluted Sheung Shui’s identity.

“Our lovely town has become chaos,” said Ryan Lai, 50, a resident of Sheung Shui, where so-called “parallel traders” buy bulk quantities of duty-free goods to be carried into mainland China and sold.

“We don’t want to stop travel and buying, but please, just make it orderly and legal. The extradition bill was the tipping point for us to come out. We want Sheung Shui back.”

When Britain returned Hong Kong to China 22 years ago, Chinese Communist leaders promised the city a high degree of autonomy for 50 years. But many say China has progressively tightened its grip, putting Hong Kong’s freedoms under threat through a range of measures such as the extradition bill.

Hong Kong’s lack of full democracy was behind the recent unrest, said Jimmy Sham of the Civil Human Rights Front, which organised protests against the extradition bill.

“The government, Carrie Lam, some legislators in functional constituencies are not elected by the people, so there are many escalating actions in different districts to reflect different social issues,” he said. “If political problems are not solved, social well-being issues will continue to emerge endlessly.”

One protester said Saturday’s scuffles started when demonstrators charged the police after the latter came to the assiatcne of mainland traders who had assaulted demonstrators.

“Some people were attacked and got injured in a stampede. I tried to save some girls so I was also attacked by pepper spray by police. Now I feel so bad. The cops are dogs,” said the man, who would only give the name Ragnar.

Protesters ripped up median barriers and fences to set up roadblocks and defences.

A young man was treated for a bloody head wound metres from where surrounded police were hitting activists armed with umbrellas. A baton charge by police in riot gear cleared the street minutes later to free trapped officers.

“We have no weapons and we were peaceful. When we saw them taking photos of us in the crowd we had to react,” said another protester, surnamed Chan, who declined to give his full name.

“We are all scared now. How can they hit us with batons?” he said, staring at a pool of blood where one of his peers was treated.

Last week nearly 2,000 people marched in the Tuen Mun residential district to protest against what they saw as the nuisance of brash singing and dancing to Mandarin pop songs by middle-aged mainland women.

On Sunday, tens of thousands marched in one of Kowloon’s most popular tourist shopping areas, trying to persuade mainland Chinese tourists to back opposition to the extradition bill.

“We want to raise awareness in Washington that the United States has to do more now to help Hong Kong become fully democratic,” said a resident of the nearby town of Fanling, who was one of five people in Saturday’s crowd carrying U.S. flags.

“They are the most important power left that can stand up to China,” added the 30-year-old man, who gave his name only as David.

Anti-extradition protesters plan another demonstration on Sunday in the town of Sha Tin, in the so-called New Territories between Hong Kong island and the border with China.