Hong Kong police in position at airport ahead of planned protest 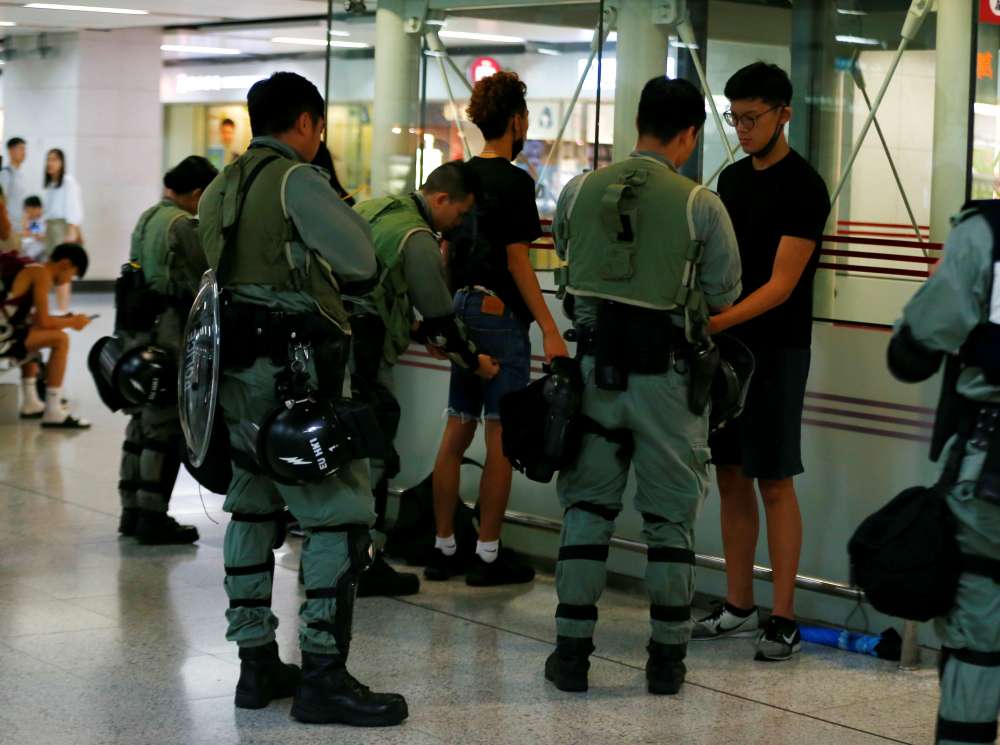 Hong Kong police searched public transport heading for the airport on Saturday ahead of another “stress test” of road and rail links by anti-government protesters, the latest in 14 weeks of sometimes violent demonstrations in the Chinese-ruled city.

Police dotted the main Hong Kong Airport Express station and searched at least one bus heading for the airport ahead of protests due to begin mid-afternoon.

Only passengers were being allowed into the airport building or to use the Airport Express, boarding in downtown Hong Kong. The train was not stopping en route on the Kowloon peninsula.

The measures are aimed at avoiding the chaos of last weekend, when protesters blocked airport approach roads, threw debris on the train track and trashed the MTR subway station in the nearby new town of Tung Chung in running clashes with police.

Protesters also occupied the arrival hall last month, halting and delaying flights, amid a series of clashes with police.

“We’re a bit nervous seeing all these police. We’ve been watching the fighting on the television and we don’t want to be part of that,” said Kurt Cruzat, a 20-year-old Filipino student on his way to study in Israel.

“I’ll be happy once we’re on the plane.”

Chek Lap Kok airport was built in the dying days of British rule on reclaimed land around a tiny island and is reached by a series of bridges.

Hundreds of demonstrators, many masked and dressed in black, attacked MTR metro stations on the Kowloon peninsula on Friday night, targeted because of televised scenes of police beating protesters on a metro train on Aug. 31 as they cowered on the floor.

Activists, angry that the MTR closed stations to stop protesters from gathering and demanding CCTV footage of the beatings, tore down signs, broke turnstiles, set fires on the street and daubed graffiti on the walls.

“The behavior was outrageous,” the government said in a statement.

Hong Kong leader Carrie Lam announced concessions this week to try to end the protests, including formally scrapping a hugely unpopular extradition bill, but many said they were too little, too late.

The bill would have allowed extraditions to mainland China, despite Hong Kong having an independent judiciary dating back to British rule.

But the demonstrations, which began in June, have long since broadened into calls for more democracy and many protesters have pledged to fight on.

Demonstrations have at times paralyzed parts of the city, a major Asian financial hub, amid running street battles between protesters and police who have responded with tear gas, pepper spray and water cannon. Violent arrests of protesters have drawn international attention.

Hong Kong returned to China in 1997 under the “one country, two systems” formula that guarantees freedoms not enjoyed on the mainland. Many Hong Kong residents fear Beijing is eroding that autonomy.

China denies the accusation of meddling and says Hong Kong is its internal affair. It has denounced the protests, warning of the damage to the economy and the possible use of force to quell the unrest.

In addition to calling for a withdrawal of the extradition bill and the release of those arrested for violence, protesters want an independent inquiry into perceived police brutality, retraction of the word “riot” to describe rallies and the right for Hong Kong people to choose their own leaders.

The protests have presented Chinese President Xi Jinping with his greatest popular challenge since he came to power in 2012.