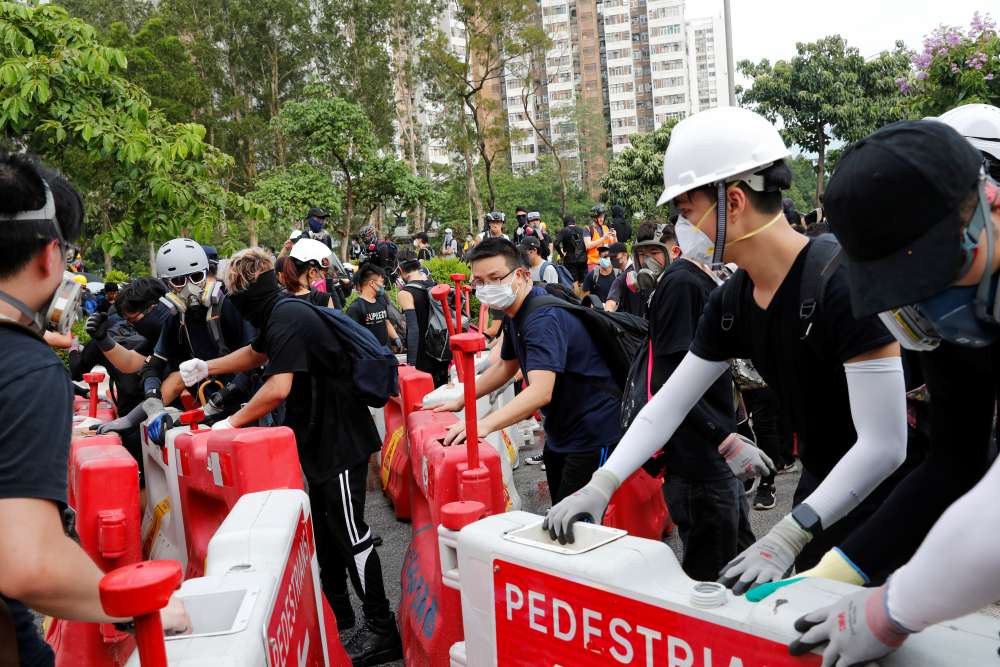 Weeks of increasingly violent protests have plunged Hong Kong into its most serious political crisis for decades, posing a serious challenge to the central government in Beijing.

On Saturday activists rallied across the city – with thousands thronging the airport arrivals hall for a second day – while elsewhere police displayed a new willingness to quickly and forcibly clear them from the streets.

Tear gas was used with little warning not long after several hundred activists who had marched through Tai Po in the north of the territory had barricaded an intersection in the Tai Wai neighbourhood.

They dispersed, as noxious smoke also filled the underground station there, bringing train passengers to tears.

“If the government thinks we’ll give up and not come out anymore they’re wrong,” said student Chris Wong, 20, at Tai Po.

Lam, Hong Kong’s leader, said on Friday the economy was being undermined by the protests, which began in June.

China, meanwhile, demanded that the city’s flag carrier Cathay Pacific Airways suspend staff involved in the demonstrations. One of its pilots was arrested last week.

Lam’s warning about the economy and China’s targeting of a key Hong Kong business mark a toughening stance by authorities as they grapple with the crisis.

‘WE ARE VERY ANGRY’

It did not deter thousands of demonstrators.

Leung Wai Man, a housewife in her 60s, said she had been motivated to march in Tai Po because she was angry about what she saw as the violent response by police at some protests.

“We are very angry about the police over arresting our teenagers,” she said. She said she was worried about escalating violence, but added that “the protesters were just trying to protect themselves against police violence.”

Young people have been at the forefront of the protests, worried about the erosion of freedoms in Hong Kong by China but also concerned with issues such as wealth disparities in the city. However, older people have also been appearing.

Earlier on Saturday, in two separate protests, small groups of elderly Hong Kongers and families marched near the financial centre’s business district. Both marches were peaceful.

“There are clashes in the recent protests and many parents are worried,” said Fion Yim, 35, representative of the organising committee for what was billed as the family protest.

“The freedom to protect our children is very important. We hope to provide a safer place for parents and their kids to participate in rallies, and to voice their concerns.”

Thousands of activists also filled the airport’s arrivals hall for a second day, some sitting and shouting slogans, while others drew protest posters and greeted arriving passengers.

There were no reports of flight disruptions.

The protests began after Hong Kong’s government tried introducing an extradition bill that would have allowed defendants to be sent to mainland China for trial.

The bill has been suspended, but protesters have stepped up their demands and are now calling for greater democracy and Lam’s resignation.

The protests have been condemned by the central government in Beijing. China has also accused foreign powers of fuelling the unrest.

Hong Kong was guaranteed freedoms not granted in mainland China, including an independent judiciary, under a “one country, two systems” formula, when Britain handed it back to China in 1997.

On Friday, the U.S. State department spokeswoman, Morgan Ortagus, said that Chinese media reports about a U.S. diplomat who met with Hong Kong pro-democracy leaders “have gone from irresponsible to dangerous” and must stop.

Ortagus earlier called China a “thuggish regime” for disclosing photographs and personal details of the diplomat.

More protests are planned for Sunday, including one in Sham Shui Po, a working class neighbourhood that has been the scene of violent confrontations between activists and police. The government announced that public buildings there such as pools and libraries would be shut on Sunday afternoon.