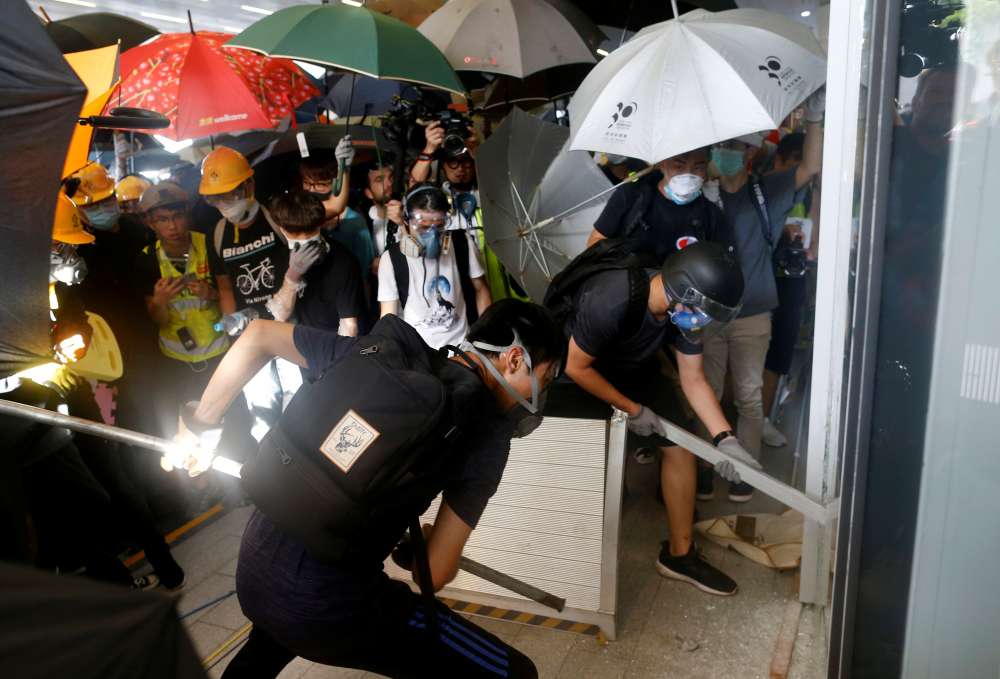 Hong Kong protesters stormed the Legislative Council on the anniversary of the former British colony’s 1997 return to Chinese rule on Monday amid widespread anger over laws that would allow extraditions to China.

A small group of mostly students wearing hard hats and masks used a metal trolley, poles and pieces of scaffolding to charge again and again at the compound’s reinforced glass, which finally gave.

Some protesters broke into the building but it was unclear how many were still inside. The council, Hong Kong’s mini-parliament, issued a red alert, ordering the protesters to leave immediately.

It did not say what would happen if they didn’t.

Protesters frantically shouted for and passed on helmets, cling film, masks and other utilities. Periodic shouts of “helmets!”, “gloves” rang out as the crowd tried to get supplies to the front lines.

Riot police in helmets and carrying batons fired pepper spray as the standoff continued into the sweltering heat of the evening. Some demonstrators removed steel bars that were reinforcing parts of the council building.

The protesters, some with cling film wrapped around their arms to protect their skin in the event of tear gas, once again paralysed parts of the Asian financial hub as they occupied roads after blocking them off with metal barriers.

Some were building barricades with steel pipes on the approach roads, facing outwards like a porcupine, to keep the police back, and scouring nearby streets for railings.

Hong Kong leader Carrie Lam suspended the bill on June 15 after some of the largest and most violent protests in the city in decades, but stopped short of protesters’ demands to scrap it.

The Beijing-backed leader is now clinging on to her job at a time of an unprecedented backlash against the government and a series of mass protests that poses the greatest popular challenge to Chinese leader Xi Jinping since he came to power in 2012.

“This is the end of Hong Kong. If Carrie Lam continues to be our chief executive, we only see real darkness ahead,” said a 60-year-old housewife surnamed Lau, who holds a foreign passport. “So we want to fight for the young people.

“I have friends… They don’t want their children to grow up in a just another Chinese city with no future for the next generation.” Opponents of the extradition bill, which would allow people to be sent to mainland China for trial in courts controlled by the Communist Party, fear it is a threat to Hong Kong’s much-cherished rule of law and are demanding it be scrapped and Lam step down.

Hong Kong returned to China under a “one country, two systems” formula that allows freedoms not enjoyed in mainland China, including freedom to protest and an independent judiciary.

Beijing denies interfering but, for many Hong Kong residents, the extradition bill is the latest step in a relentless march towards mainland control.

China has been angered by criticism from Western capitals, including Washington and London, about the legislation.

Beijing said on Monday that Britain had no responsibility for Hong Kong any more and was opposed to its “gesticulating” about the territory.

Tens of thousands marched in temperatures of around 33 degrees Celsius (91.4°F) from Victoria Park in an annual rally that organisers hoped would get a boost from the anger over the extradition bill. Many clapped as protesters held up a poster of Lam inside a bamboo cage.

More than a million people have taken to the streets at times over the past three weeks to vent their anger.

A tired-looking Lam appeared in public for the first time in nearly two weeks, flanked by her husband and former Hong Kong leader Tung Chee-hwa.

“The incident that happened in recent months has led to controversies and disputes between the public and the government,” she said. “This has made me fully realise that I, as a politician, have to remind myself all the time of the need to grasp public sentiment accurately.”

Beijing’s grip over Hong Kong has intensified markedly since Xi took power and after pro-democracy street protests that gripped the city in 2014 but failed to wrestle concessions from China.

The extradition bill has sent jitters across all sectors of Hong Kong in an unprecedented backlash against the government.

Tensions spiralled on June 12 when police fired rubber bullets and tear gas at anti-extradition protesters near the heart of the city, sending plumes of smoke billowing among some of the world’s tallest skyscrapers.

The uproar over the bill has reignited a protest movement that had lost steam after the failed 2014 demonstrations that led to the arrests of hundreds of activists.

Activists raised a black bauhinia flag to half mast outside the Legislative Council building before the rally and turned Hong Kong’s official flag, featuring a white bauhinia flower on a red background, upside down. The turmoil comes at a delicate time for Beijing, which is grappling with a trade dispute with the United States, a faltering economy and tensions in the South China Sea.

Opponents of the extradition bill fear it would put them at the mercy of China’s justice system, where human rights are not guaranteed.

Beyond the public outcry, the extradition bill has spooked some of Hong Kong’s tycoons into starting to move their personal wealth offshore, according to financial advisers, bankers and lawyers familiar with the details.

By In Cyprus
Previous article73 year old man succumbs to injuries after road collision
Next articlePaphos: 81 driving offences in 12 hours