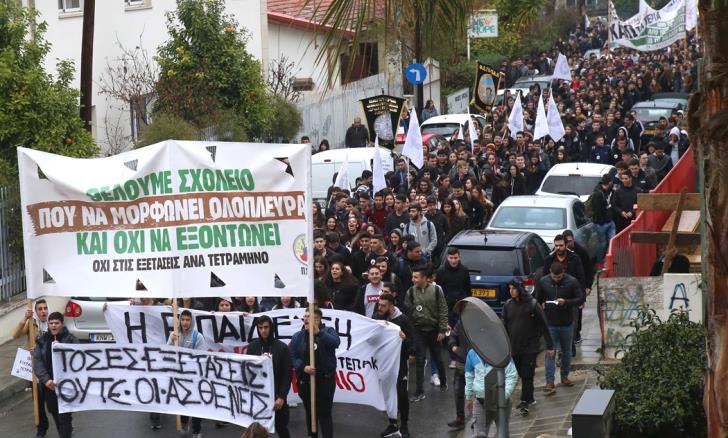 High school pupils walked out of class today, skipping the third, fourth, fifth and sixth periods as a protest against the implementation of four-monthly exams.

President of the pupil’s federation PSEM Yiannis Lapithios said with their massive absence from the classrooms, pupils wanted to make clear to the Ministry of Education that they are not afraid of threats or attempts to intimidate them and branded the four-monthly exams “anti-student”.

The new system applies to pupils in the first grade of High schools only. The first exams are due to be held next month. It replaces the existing system under which exams are held at the end of the school year.

“Yesterday, the Ministry of Education has sent circulars and messages to the parents saying that pupils who are not in class will not only be recorded as absent but will also have their exam grades lowered – we are certain that there is no such rule in place, it is a clear threatening tactic,” Lapithios added.

Asked about the meeting that will take place at the Ministry of Education on the subject next week with pupils’ participation ,Lapithios said that they hope to finally be heard and start a constructive dialogue for a proper type of assessment.

Parents advise children “to be patient”

The Pancyprian Confederation of Associations of Parents of Public Secondary Schools of Secondary Education advised pupils “to be patient”  and wait a few days as there will be a meeting at the Ministry of Education on the issue. Confederation head Kyriakos Nikiforou said: “I want to urge everyone to avoid moves that will escalate the situation, which is the last thing we need now.

“Yesterday we had a meeting with the Minister of Education. We presented our suggestions. The Minister said he would call a meeting within the next few days. I expect it to take place on Monday the latest. The Minister informed us yesterday that all stakeholders will be invited to this meeting, so it will be attended by the pupils and the educational organisations,” he added.

“We are clear, that we are calling for some changes in the assessment to help children with tests held in November. From now on, our position is to postpone these tests have them in January – after the end of the quarter”.

Ministry of Education spokesman, Spyros Antonellos told the Cyprus News Agency there was no need for pupils to abstain from their lessons in order to protest the four-month exams.

“The Ministry of Education considers that these protests are unnecessary… the four months period is almost over and the procedures have been implemented since September 6 thus we are moving forward with the exams.”

He explained that “the Minister cannot reverse the situation with exams since it is a matter of legislation approved by the Parliament. The bill that has been passed envisages four-monthly exams,” he underlined.

Asked about the “threats” cited by PSEM he denied any kind of intimidation and said the ministry repeatedly demonstrated its respect for PSEM and their contribution, but all must obey the law.

He also said that the update of the system was completed and expressed gratitude to all those teachers who participated in this process.

He added that there was also a two-day full briefing of school directors on what they should follow in schools.

The Ministry of Education has carried out two tests so far to see how the system works and will carry out a third within the next few days, he concluded.