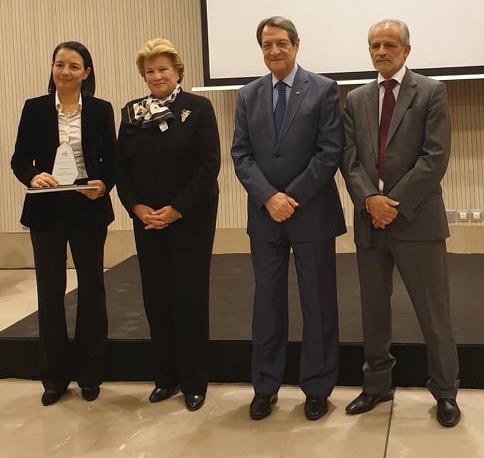 Hermes Airports received an honorary distinction in the field of volunteerism at the 5th Cyprus Competition in Corporate Social Responsibility.

At a ceremony held at the Presidential Palace last night, the operator of Cyprus’ international airports was awarded for a series of good practices and actions that it implemented to benefit Cypriot society during the period May 2018 – May 2019.

The Competition was organised for the fifth consecutive year by the Pancyprian Volunteerism Coordinative Council (PVCC) and was aimed at private companies whose actions/corporate social responsibility practices and cooperation with voluntary non-government organisations (NGOs), contributed to addressing social matters and needs.

In the competition, Hermes Airports was distinguished for its participation in the campaign “Let’s Do It Cyprus” and its cooperation with the Department of Environment to create interactive workshops for schools, on the negative environmental impact of plastic straws.

Furthermore, it was distinguished for its initiative “Flying with Autism”, which it carries out in cooperation with the “MAZI” Association, under the Programme “I Can Fly”, which helps familiarise people with autism with the process of flying. The honorary distinction also concerns the support provided by Hermes Airports towards Sophia Foundation, as part of the programme “I Cook and Offer” for Cyprus’ children, which saw 20 virtual hippopotamuses that were created for free by local artists as part of the programme installed in various central parts of Larnaca’s airport building.

Receiving the honorary award on behalf of Hermes Airports, Chief Executive Officer, Eleni Kaloyirou said that Corporate Social Responsibility has been one of the operator’s main pillars of activity ever since it started managing the two airports a decade ago, while it is based on the 17 Sustainable Development Goals set by the United Nations. “By adapting these goals to the needs of Cyprus’ society, our aim has always been to collaborate with other organisations so that these actions have multiple benefits,” she added.