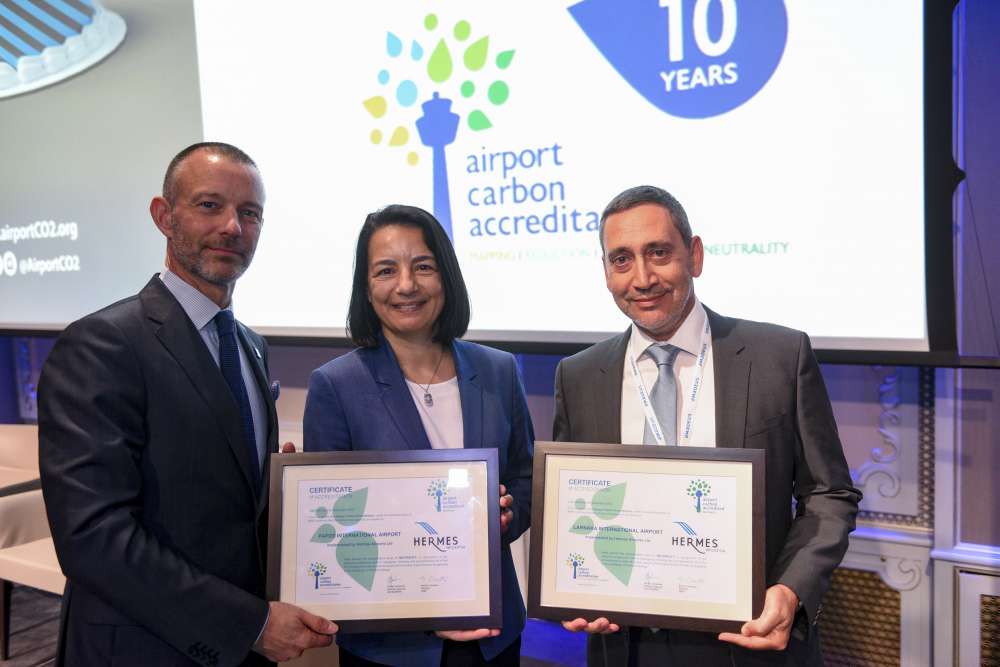 Just six months after receiving the Level 3 ACA Certification, Hermes Airports acquired the fourth and highest level of the ACA Certification for Larnaca and Paphos airports, which relates to the provision of compensation for carbon dioxide emissions.

The ACA (Airport Carbon Accreditation) is issued by the ACI (Airports Council International) and focuses on efforts to map, calculate, reduce and offset carbon dioxide emissions across the globe. The ACA certification is comprised of four levels, which have so far been acquired by 274 airports in 71 countries, representing 44% of global air passenger traffic.

So far, only 51 airports around the world, including Larnaca and Paphos airports, have received the Level 3+ Neutrality Certification.

To acquire this Certification, Hermes Airports had to adopt compensatory measures for the emissions that are directly controlled by the company and cannot be minimised or reduced further.

In this context, Hermes has adopted compensatory measures to support three projects: the construction of a wind farm in Taiwan, a solar park in India, and the purchase of cookstoves for three communities in Nepal.

These projects have a positive impact on the communities and are aligned with the UN Sustainable Development Goals, with particular focus on Decent Work and Economic Growth and Affordable and Clean Energy among others. By investing in energy-efficient infrastructures, Hermes Airports managed to significantly reduce its carbon footprint, and as such, Larnaca and Paphos Airports attained carbon neutrality.

The Certificates were presented to Hermes Airports CEO Eleni Kaloyirou and Chief Operating Officer Miltos Miltiadous, by the Director General of ACI Europe  Olivier Jankovec, during the ACI Europe Annual Assembly & Congress held on June 26-27 in Limassol. Moreover, during the conference, Hermes Airports signed a landmark commitment to become net zero for their carbon emissions by 2050.

“Receiving the highest level of ACA Certification is a great honour for Cypriot airports and confirms Hermes Airports’ commitment to the long-term reduction of carbon emissions, as well as the effectiveness of the airports’ strategy in managing energy policy and carbon dioxide emissions,” said Kaloyirou.