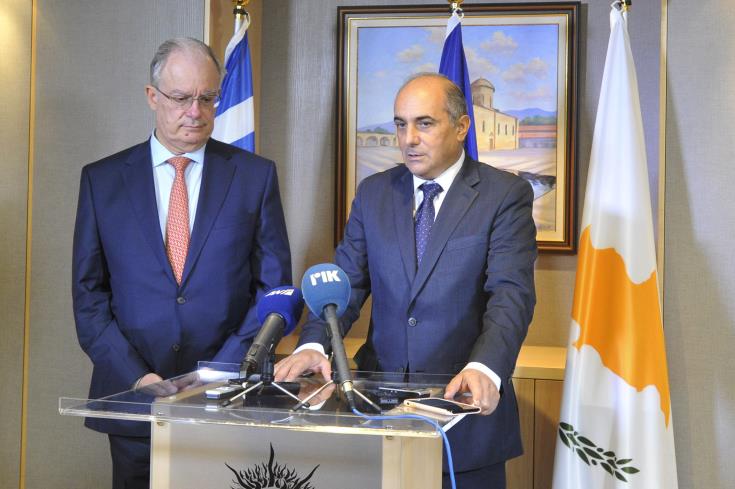 Hellenic Parliament President, Constantine Tassoulas, expressed on Thursday the unanimous and strong support of the people of Greece to Cyprus “during this phase of numerous developments and provocations” related to the Cyprus problem.

Tassoulas, who is paying an official visit to the island, also noted that the seventh and eighth volume of the “Cyprus File”, regarding events that shook the island in 1974, will be delivered by the beginning of October the latest. “We are almost ready to hand over the seventh and the eighth volume and we continue rapidly for the rest volumes, so that every six to seven weeks one volume will be completed,” he added.

Speaking at the beginning of a meeting he had with the President of the House of Representatives, Demetris Syllouris, Tassoulas noted the joint course which Cyprus and Greece follow, so that despite the difficulties and the adversities there will be prospects for the materialization of their objectives.

Moreover, he underlined that “we will continue as parliaments to play our role in promoting the relations with neighbouring countries through our relationship with their parliaments, as those of Israel, Egypt and Jordan.”

On his part speaking at the beginning of their meeting, Syllouris expressed certainty that “our cooperation will not only continue but will also be upgraded” and that the number of areas in which they cooperate will increase.

As regards the “Cyprus File”, Syllouris said that there is much work to be done, noting the goal of getting all data that need to be evaluated “and also to continue the effort, as agreed, to find other sources” from other Ministries, as the Defence Ministry and the Foreign Ministry, and from individuals.

He noted that Cyprus and Greece have excellent relations adding that they have to use these relations to achieve more, and yield more concrete results.

Moreover he noted that “we have agreed that we can achieve better results not only to the benefit of Cyprus and Greece but also of the region and Europe as well.”

Syllouris said that the two countries work to promote peace in the region and for a more effective Europe.

On his part, Tassoulas said in his statements that he is in Cyprus to confirm the excellent cooperation between the two parliaments. He noted that particularly at this phase that the Turkish provocative actions have increased in an unacceptable way, the Greeks and the Cypriots do not only respond to this with the rightfulness of their positions but also though their joint course.

I am here to state in a humble but decisive way that the Greek people stand by Cyprus, during this period as well, and will continue to stand by you, Tassoulas noted.

Moreover he said that they discussed about issues related to the relations of the two parliaments, noting that their cooperation will continue.

Cyprus has been divided since 1974 when Turkey invaded and occupied its northern third. Prior to the invasion, the military junta ruling Greece at the time engineered a coup against the legal government of the Republic of Cyprus.