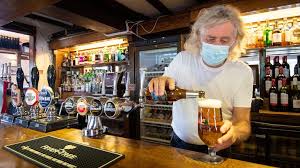 People in England appear to have broadly behaved themselves as pubs reopened this weekend, Britain’s health minister Matt Hancock said after the latest step towards a return to normality from the coronavirus lockdown.

Thousands of people flocked to pubs, restaurants and bars around England on Saturday as large parts of the hospitality sector reopened for the first time since March.

Prime Minister Boris Johnson has urged people to “enjoy summer safely” as he bids to tread a narrow path of restoring consumer spending to help battered businesses recover, while avoiding a second wave of COVID-19 infections.

Health minister Matt Hancock said he was satisfied with how the latest step to ease the lockdown had gone and played down individual cases where social distancing guidelines were not respected.

From what I’ve seen, although there’s some pictures to the contrary, very very largely people have acted responsibly,” he told Sky News.

“Overall, I’m pleased with what happened yesterday. It was really good to see people out and about, and largely socially distancing.”

Britain has been the European country worst hit by the coronavirus and has an official death toll of 44,198.

The rule changes apply only to England as the devolved nations in the United Kingdom have been setting their own timetables for easing restrictions, with Wales and Scotland being slower.

“What was crystal clear is that drunk people can’t/won’t socially distance,” he said in a tweet after finishing a shift in Southampton, south England.

“It was a busy night but the shift managed to cope.”