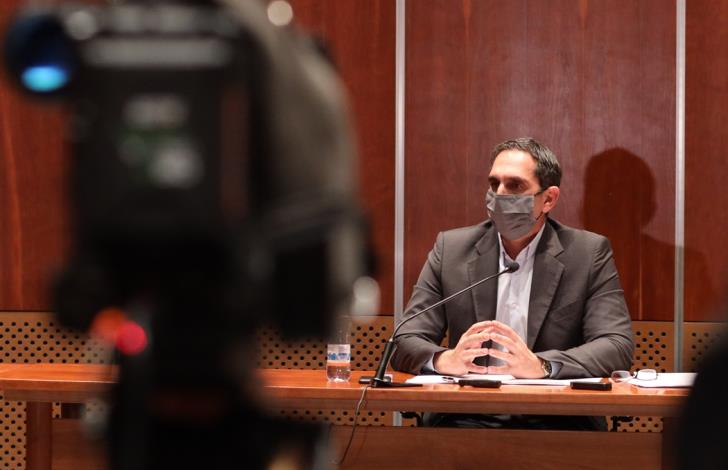 Cyprus Health Minister Constantinos Ioannou, announced on Friday that the island goes into a 3-week lockdown to contain the virus as there is a surge in new cases and the situation in hospitals is alarming. We will do our utmost to prevent a scenario where people die helpless because no hospital beds are available, he stressed.

The measures go into effect on Sunday morning.

“In essence in the coming three weeks we must stay in our homes, our shelters, in order to contain the virus from spreading,” he noted addressing a press conference at the Ministry of Finance. “The effort aims to drastically reduce social and professional gatherings at homes and places of work, because that is where most cases are found,” he added.

Minister Constantinos Ioannou said that curfew remains between 9 at night and 5 in the morning and all meetings at private and public spaces are prohibited. Citizens are allowed to walk in parks and at the beach for physical exercise purposes and only two at a time. Citizens will be allowed to send up to 2 sms per day for their movements. A list of the purposes for which movement with the use of sms is allowed will be released during the day.

Ioannou said that work from home will be introduced for the public sector and local authorities with an exception for essential services which will be included in a new decree to be issued later today. Moreover, church services will be taking place without attendees and weddings, baptisms and funerals will take place with a maximum of ten people.

Services of the construction sector will remain open as well as food and beverage retail companies and other companies which will be announced by the Labour Ministry.

Private companies and services that remain in operation and promote remote work are allowed to have 15% of their staff in physical presence at the offices but the maximum number of employees that can be physically present are 20 people per establishment.

Sport matches of the professional championships of A `Category are allowed to take place but without spectators. All other tournaments, as well as sports activities for people under 18, are suspended.  Athletes of championships of Categories B `and C` will be able to train following the protocols in place.

The Minister also said that more rapid tests will be carried out for the population and for businesses that will remain open during the lockdown.

He also said that we need to decongest the health system and have a certain number of patients in hospitals.

Ioannou added that Cyprus took measures from the summer to contain the 1st wave of the pandemic and additional measures which provided for mini lockdowns however the results were not the ones expected and therefore more drastic measures are needed .

The Minister said that the government assessed the recommendations of the Scientific Advisory Committee and the Cabinet decided to implement stricter measures to limit the movement of the public.

Ioannou further noted that the inoculation program will continue during the next 3 weeks according to the strategy the Ministry drafted , pointing out that we need to follow the protocols, be vigilant because time is needed for a high percentage of the population to get immunity.

He said that the government decided to introduce stricter measures having exhausted all other choices. Ioannou urged everyone to adhere to the new measures, to be responsible and consider the vulnerable who are in most danger.

For months now, Ioannou said, an extraordinary effort is ongoing, day and night, under very difficult circumstances. “Thanks to this effort,” he noted, “Cyprus was able to gain time to safeguard the health system, which has been strengthened with staff, infrastructure and consumables.

However, he went on, as we have said many times, everything has a limit. “We have already crossed the red line and drastic measures are necessary in order not to have to experience what we all wish to avoid, that is to say to witness people dying helpless because we don’t have available beds,” he stressed.

“We do not ever want to experience this, we will not allow for it to happen, we will do our utmost to prevent it from happening,” he added.

“The measures we are taking today aim to see this indicator drop to safe levels so that we are able to offer quality health services to everyone who needs them,” Ioannou explained.

He further assured that the government has put safeguarding public health as its top goal as well as curbing the loss of life due to the disease.

Taking this into account, it has taken these decisions, he said, so that the nightmare other countries have experienced can be prevented.

“Continuing the effort, supporting health professionals, giving the health system space, safeguarding our compatriots who are in danger, protecting our loved ones, is a one-way street,” the Minister of Health stressed.