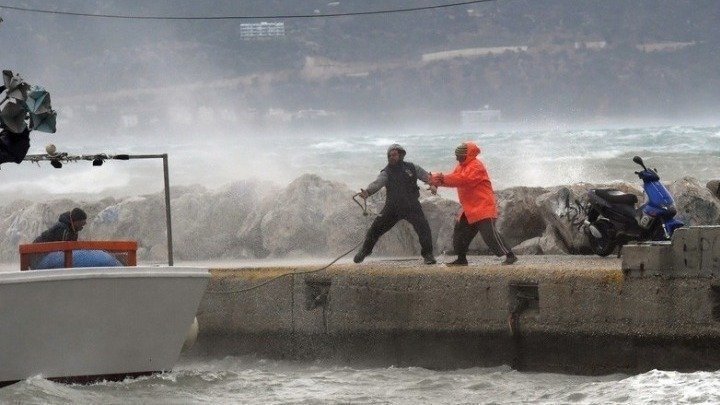 The next six to nine hours will be crucial for the Ionian islands, currently in the grip of Mediterranean hurricane ‘Ianos’, while a new front bringing intense weather phenomena is expected to reach Attica and northern Evia later on Friday and Saturday, Deputy Civil Protection and Crises Management Minister Nikos Hardalias said after a meeting held early Friday at the civil protection operations centre.

Hardalias said that there is a race against time by local authorities to repair the damage to roads and infrastructure on the Ionian islands, with the assistance of the Fire Brigade and volunteers.

Referring to the developments in terms of the Medicane, he said that it will remain in the west for the next six to nine hours and afterwards weaken and start moving south, affecting the western parts of the Peloponnese.

“We have a whole day before us with the phenomena affecting the wider region of the Peloponnese”, said Hardalias, adding that “at the same time, according to the meteorologists, a remnant of the warm aerial mass of the cyclone is moving northeast and meeting a northwest stream, creating a convergence that will generate intense weather phenomena, thunderstorms and heavy rainfall but not strong winds and which will affect Central Greece, reaching up to southern Thessaly and eastern parts of the mainland from the afternoon”.

He said that the regions of Karditsa, Magnesia, Viotia, Fthiotida, Fokida and probably the north part of Evia are expected to see very high amounts of precipitation, with a great volume of water and violent rainstorms.

“We are monitoring this new front, which is showing signs that it will move south and east towards Corinth and Attica on Saturday”, he said, adding that Attica will not be affected by the Medicane but from this new front that is being created.

Finally, he said that the entire state mechanism is on full alert.