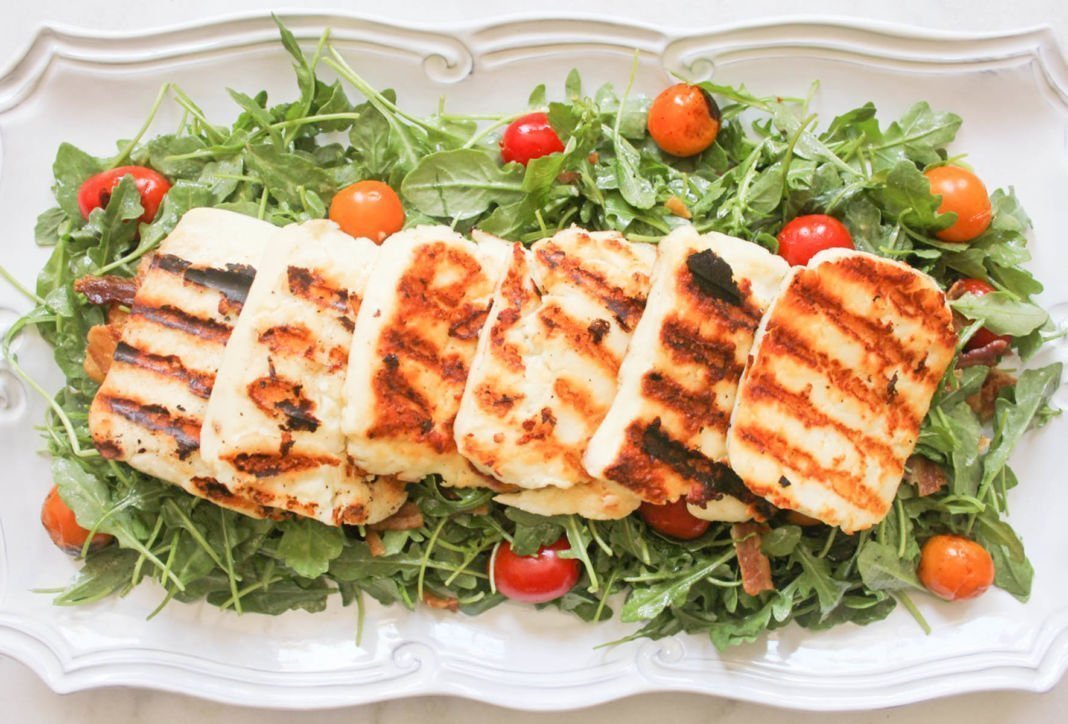 In recent years, halloumi cheese (or hellim) has become more and more popular and it’s easy to see why. Described by culinary aficionados as one of the world’s most grillable cheeses, halloumi is soft, mellow, curd-like and, most importantly, delicious. Its texture is somewhat similar to a firm mozzarella, however, unlike its Italian cousin it has a distinct salty flavour, especially when preserved in brine.

Halloumi is set with rennet, and is unusual in that no acid or acid-producing bacteria are used in its preparation. This low level of acidity causes halloumi to have a much higher melting point than most other cheeses and makes it ideal for frying and grilling, as it does not melt and retains its shape.

Many chefs recommend that halloumi is best served grilled. Simply cut it into fairly thick pieces and place over charcoal for a few minutes to transform it into golden-crusted slices with a milky soft centre and smoky flavoured exterior. Halloumi is also an extremely popular accompaniment to grilled meats and a staple part of the traditional Cyprus meze. Its applications in the food industry, however, are endless and it is also used in toasted sandwiches, summer salads and various cooked dishes.

During the summer months it is often served with slices of chilled watermelon to make a refreshing and light dish and is also an important ingredient in trahanas, a traditional hearty soup, commonly eaten in the winter. The traditional Cypriot cheese was originally made with sheep milk although in more recent years mass-produced varieties use combinations of sheep, goat and cow milk.

It is unknown when exactly halloumi was first made in Cyprus but numerous historical reports claim that it was produced on the island before the 1500s. One of the first references that link halloumi with Cyprus can be found in the book Geoponiko (1643) in which Archimandrite Kyprianos describes the method for making the cheese which he claimed had been produced on the island for nearly 150 years before the publication.

The first step to producing halloumi, in its modern form, is to heat the milk in a cauldron before adding rennet to help the curdling process. Once the curds set into soft cheese they are removed from the whey and cut before pressing.

The halloumi is then cooked again until it acquires its rubbery texture, and is then removed and folded into individual oval shapes and sprinkled with mint. It is then added to brine to ensure that no bacteria development occurs.

Cyprus has registered halloumi as a protected Cypriot product in the US and Canada and obtained exclusive rights to the name. While many similar cheeses are produced by dairy and goat farmers in the US and Canada, for proprietary reasons, they must call their products ‘Halloumi-style cheeses’.

Very recently, the government submitted an application to Brussels to register halloumi under the EU’s PDO (protected designation of origin) rules. The application is pending approval.